On November 9, 2016, the Constellation Brands stock plummeted 8%. In January 2017, the alcohol conglomerate, which produces Corona, Modelo, and Pacifico, had not recovered – its stock hovered at 10% below its pre-election value.[1]

Why would a beer brand have a negative reaction to the election? The answer lies in one of President Trump’s key campaign pillars: to renegotiate trade agreements with Mexico and bolster American industry. President Trump threatened to impose an up-to 35% tax on companies importing goods from Mexico – and Constellation was doing just that.[3]

Constellation entered Mexico in 1993 with its acquisition of Corona and solidified its position in 2013 by acquiring Modelo’s U.S. business.[4] Today, Constellation’s Mexican beer business accounts for 52.6% of its total net sales and 63.5% of its total earnings.[5] In order to maintain its authenticity and legal standing as a Mexican beer, Constellation centers its entire supply chain for brands like Corona and Modelo in Mexico.[6],[7]Approximately 60% of the COGS for these brands are attributed to Mexico and 40% to the U.S.[8]

In a post-Trump world, Constellation must decide how to mitigate potential tariff costs and avoid passing them on to U.S. consumers, which could cause a drop in sales. How does CEO Rob Sands protect the crown jewel of his company without acting too rashly in the face of unconfirmed legislation? 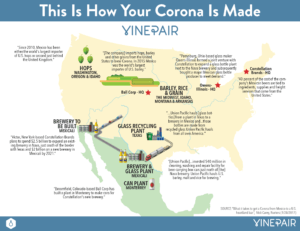 Figure 2: Corona’s supply chain map showcases the path from the brewery in Mexico to consumption in the United States[9]

By January 2017, the executive team had developed a measured strategy to protect the company, and Sands attacked concerns about tariffs to calm analysts. From an external (short term) perspective, Sands stressed that Constellation was in discussions with key legislators.[10] As a result of these conversations, Constellation was confident that it did not need to rush to overhaul its supply chain. Rather, the company took a medium term approach, dedicating internal resources towards conducting dynamic political scenario analyses. These models would allow Constellation to activate a decision tree if legislation passed placing tariffs on Mexican beer. Potential actions within that tree included shifting packaging or the purchase of natural gas to the U.S. to reduce Mexican COGS on glass production and gain tax breaks at home.

What I appreciated about this approach was that Constellation remained calm despite uncertainty – they took steps to mitigate risk, but did not uproot their entire manufacturing process. CFO David Klein reiterated Sands’ plan on CNBC’S Closing Bell, explaining that Constellation had analyzed potential effects of the border tax on its business. He stressed that Constellation was prepared to make changes to its manufacturing if, and only if, absolutely necessary.[11]

Constellation does, however, seem to be placing a bet that election rhetoric rarely plays out as truth.[12] Will they really be able to act as quickly as they say if they need to? Below are steps Constellation can take to help protect their powerhouse Mexican beer business more completely:

Constellation is methodically preparing to protect their bottom line as they wait to see how international trade agreement changes play out under President Trump. Given this approach, I was surprised to find that they are simultaneously investing in Mexico, funneling over $2B into plant/brewery expansions.[16]

Does this make sense? What will they do with their Mexican work force if tariffs do occur – especially given the labor force will need to be cut should elements of the Constellation Brands supply chain shift to the U.S.?

How digitalization is supporting Adidas expand the reach of Fast Fashion