On August 8, 2016, Vail Resorts announced that it was acquiring Whistler Blackcomb, a major ski resort in the Canadian province of British Columbia. In its official release, Whistler Blackcomb called the deal “the most exciting and transformative investment in [our] history.” [1] The news was well received, with Vail Resorts’ stock price increasing by 6.3% the morning of the announcement. [2]

Strategically, Vail Resorts had a lot to gain from the acquisition. Whistler Blackcomb, located in Canada, is one of the world’s largest and most popular ski resorts. With a portfolio of resorts around the United States and in Australia, Vail Resorts saw tremendous operational and financial upside in entering the Canadian market.

But behind the deal was a more subtle — but no less serious — consideration: the effect of global warming on the ski industry. In its joint press release on the partnership, Whistler Blackcomb’s CEO, Dave Brownlie, stated that the company’s “board of directors has also been monitoring … the unpredictability of year-to-year regional weather patterns” and that “partnering with the geographically diversified Vail Resorts … [secures] the long-term future of our resort, our industry, and our community.” [3]

Ski resorts are used to grappling with occasional weather variability. Big snowstorms attract crowds and bring in massive amounts of revenue; dry spells can devastate short-term profitability. Long-term weather forecasts can make or break a season, especially for remote resorts, as skiers often have to book travel far in advance. Low snow levels often require resorts to open late and close early, resulting in the depletion of cash reserves and the postponement of structural and strategic investments. To remain operational during seasons with little snow, resorts turn to snowmaking machines. According to a study conducted in 2012 by Protect Our Winters (POW) and the Natural Resources Defense Council (NRDC), over 88% of resorts utilize these snowmaking machines, which cost over $500,000 a year to operate and represent more than 50% of a resort’s average energy costs. [4] 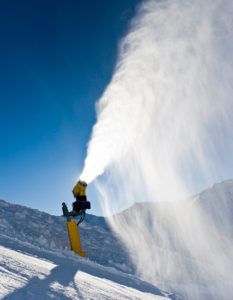 Further down the slope

There are clear signs that weather variability — and rising temperatures — are having an increasingly adverse effect on ski conditions and resorts’ profitability. According to the NRDC’s study, the ski industry lost an estimated $1.07 billion in revenue over the first decade of the 21st century due to decreases in snowfall. [5] It appears that things are only going to get worse: global temperatures could rise by 4 to 10 degrees Fahrenheit by the end of the century, which would decrease snow depths by 25-50% and halve the length of an average ski season. [6] By 2045, more than half of the ski resorts in the Northeastern region of the United States may no longer be operational. [7]

Vail Resorts finds itself in a difficult predicament. In the short term, it must contend with the immediate implications of increased weather variability: unreliable demand and supply forecasts, spikes and dips in labor and machine utilization, and increases in snowmaking costs. In the long term, it must prepare for the possibility of a world without natural snow.

What should Vail — and the industry as a whole — do to mitigate these concerns? For one, it will have to invest in developing new snowmaking technology that is more energy-efficient and cost effective. It should also increase its commitment to adopting more energy-efficient practices within its own operations. In 2011, the National Ski Areas Association (NSAA), of which Vail is a part, launched the “Climate Challenge” — a voluntary program in which resorts commit to conducting a “climate inventory” and reducing greenhouse gas emissions. [8] As of 2016, not all of Vail’s resorts have volunteered for the challenge.

Long term, Vail should also amplify its lobbying efforts and push lawmakers to begin acting against global warming. There’s already been some movement on this front; the NSAA has been an active force on Capitol Hill. Vail, along with its peers, should continue to broadcast its support for cap and trade and for more stringent emission standards.

With its acquisition of Whistler Blackcomb, Vail has also shown that it aims to mitigate climate risk by building a portfolio of global resorts. It should double down on this approach and continue to pursue an aggressive acquisition strategy. The more diversified it becomes, the more resilient it will be to the pressures of global warming.

Climate change also raises some interesting philosophical dilemmas for the industry. As temperatures continue to rise and man-made snow becomes the norm, resorts may have to re-brand the experience they provide. Will consumers care about the provenance of the snow itself? Will skiing become an exercise in nostalgia?

[8] “Re: Support of the Climate Declaration.” Letter written to the Business for Innovative Climate and Energy Policy (BICEP), Ceres, on behalf of the National Ski Areas Association (NSAA). May 29, 2013. http://www.nsaa.org/media/152329/climatedeclarationsupportletter2013.pdf. Accessed November 2016.

Student comments on A Slippery Slope: How Can Ski Resorts Adapt to Global Warming?