Half Baked.  Cherry Garcia.  Phish Food.  Are you hungry yet?  For the last 38 years, Ben & Jerry’s has been known for its premium ice creams.  It’s also been a recognized early-mover in corporate social responsibility[1] with a mission statement incorporating sustainability. 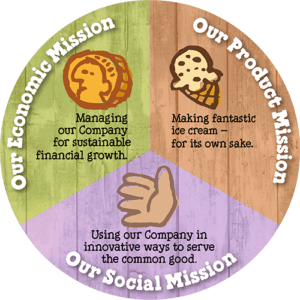 Climate change has been one key focus area for the company in recent years.  In fact, the company released a Save Our Swirled flavor and an advocacy campaign to inspire their fans to push for climate change action.

Is CSR the Only Reason Ben & Jerry’s Cares About Climate Change?

No.  As the ingredients in its ice cream are derived from agricultural sources, climate change threatens to disrupt the company’s supply chain.

Ben & Jerry’s has placed several flavors on its “Endangered Pints List”[3] because they rely upon ingredients such as cocoa and nuts that grow in areas threatened by climate change.  For instance, the amount of land suitable for cocoa cultivation in Ghana and Cote d’Ivoire (together representing 53% of world cocoa production) is expected to decrease meaningfully by 2050 due to rising temperatures and drought conditions: 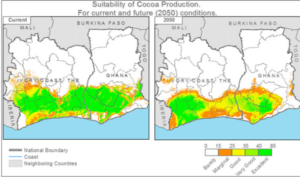 Other ingredients are indirectly affected, such as dairy.  In the US, rising temperatures are expected to drive increased heat stress among cows, lowering milk production by 6% by 2080 if all other factors in milk production stay equal.[5] While this effect is relatively moderate, it is likely to affect the competitiveness of family farms, which lack sufficient capital to pursue breeding programs or other initiatives that could reduce the production losses.[6]  As Ben & Jerry’s currently relies upon family farms for its milk[7], the company may eventually need to alter its supplier mix or pay more for their milk to continue sourcing from family farms.

How is Ben & Jerry’s responding?

External actions: As discussed above, the company has launched a global awareness-raising campaign against climate change.  Their website also has a call to action for fans, asking them to sign a petition to pressure legislators to act on the issue and lobby for change alongside Ben & Jerry’s.[8]

Internal actions: Ben & Jerry’s recognizes that they can’t just demand others to act to prevent climate change; they also need to control their own impact on the environment.  The company has taken several measures to limit their negative externalities on the planet.  For instance, in 2015 they strengthened their Caring Dairy program, which establishes some of the highest standards for the dairy industry.[9]  One such standard is that supplier farms must participate in an environmental monitoring program.[10]

So climate change is a clear-cut problem for Ben & Jerry’s, right?

Actually, it’s not that simple.  While Ben & Jerry’s is certainly taking a noble stance in the fight against climate change, they’ve failed to acknowledge one salient issue: when it’s hotter, people eat more ice cream.

Depending on the time of year, each incremental °C can translate to 5-10% of additional ice cream sales[11].   Climate change could actually present untapped profit opportunities for Ben & Jerry’s.

Is the company making the right move in pushing so hard against climate change, then?

From a purely revenue and cost analysis, the answer depends on the expected cost to the company of supply chain disruptions vs. the margin uplift from a climate-driven ~10-20% increase in sales by 2050 (given that global temperatures are expected to increase by approximately 2°C if no additional mitigation efforts occur).[12]

Yet even if those effects could be accurately quantified, there would still be further unknowns from just an economic standpoint.  Specifically, demand for Ben & Jerry’s products may increase over time because of the positive PR from their sustainability mission.  66% of global consumers say they are willing to pay more for products that come from companies that are committed to positive social and environmental impact, up from 50% in 2013[13].   If these trends continue, Ben & Jerry’s may improve their profitability more by staying true to their mission against climate change than by benefiting from its warming effects, but it’s impossible to quantify all the relevant parts of the puzzle.

But here’s the thing: regardless of whether climate change could be profitable, it isn’t going to matter to this values-driven company.  Ben & Jerry’s has considered sustainability a core value throughout its history, and it isn’t about to stop now.  Enjoy your Chunky Monkey in good conscience!

Flavors We Could Lose to Climate Change. (2016, September 6). Retrieved from Ben & Jerry’s: http://www.benjerry.com/whats-new/endangered-pints

Is One Man’s Trash (Fish) Another Man’s Treasure?

Student comments on A Melting World: Ben & Jerry’s in the Age of Climate Change