Millennials love their coffee because “it provides them everything they love: status, experience, and personalization” [1]. This love affair is growing stronger in 2017 as 62% of Americans are drinking coffee daily, compared to 57% in 2016, with the largest growth among those from 13 to 18 years of age [2].  But as demand continues to grow, climate change is projected to dramatically reduce coffee bean yields and the arable land available to grow coffee [3]. Ultimately, this will create major raw material supply risk for Starbucks, one of the world’s largest buyers and sellers of coffee worldwide.

The emerging problem and why Starbucks should be concerned

Brazil and Central America currently grows a majority of the most popular type of coffee, Arabica. According to the International Center for Tropical Agriculture, if earth’s temperature rises as projected, “80% of the land currently used to grow Arabica is expected to become unsuitable to the crop by 2050. Over the same period, the Climate Institute expects a 50% decline in suitable land globally” [3][4]. This change is also poised to impact the economic well-being of more than 120 million people world-wide that rely on the coffee economy [5]. Naturally, this puts Starbucks’ supply of coffee beans at risk – a risk that can’t solely be mitigated by diversifying the supplier base. If not effectively addressed, this emerging problem could make it difficult for Starbucks to meet the growing demand for coffee and dramatically increase the company’s cost of goods sold – potentially forcing it to pass on the increased cost to adoring consumers in hopes of maintaining attractive gross margins.

Since the primary effect of climate change on coffee growers will be a decrease in yield, Starbucks has established the Global Farmer Fund Program to develop a “network of farmers around the world who are equipped with financing to renovate their farms and implement sustainable growing practices” [6]. This program requires farmers to follow a set of standards that “include using shade and tree conservation to protect crops, and managing risks from pests and disease spurred by changes in climate” [3]. This action is analogous to a company like Toyota teaching its suppliers how to improve manufacturing and operations practices to establish a more reliable and efficient supply source for itself. Starbucks is also helping its farmers by providing them with seedlings that are resistant to certain diseases like leaf rust, a condition exacerbated by climate change [3]. Though this may increase Starbucks’ cost, it should help its suppliers stay afloat and maintain a reliable supply source.

While these actions should help Starbucks in the shorter term, the company is also positioning itself for a markedly different agriculture environment in the future. For example, in 2013 Starbucks bought its own coffee farm in Costa Rica and utilized it as an experimentation facility – “testing different coffee growing methods and developing plants that could survive in warmer temperatures” [3]. The latter is fascinating because it’s a harbinger of a potential increase in the use of genetically or biologically modified crops, seeds, or fertilizers to combat the effects of climate change.

First, Starbucks should implement operational changes aimed at reducing its own carbon emissions and therefore slowing down the effects of climate change. Specifically, focus on reducing electricity usage at each Starbucks store. In 2015, electricity usage accounted for 75.5% of Starbucks’ total greenhouse gas emissions [7]. An incremental action that Starbucks has yet to implement is to replace the open-door refrigerator display cases that are currently used in stores with glass-doored cases. Though this could slightly hurt the customer purchasing experience, it may reduce energy consumption of the refrigerator units by potentially 20-30% as “open display cases consume approximately 1.3 times more energy than doored cases” [8]. 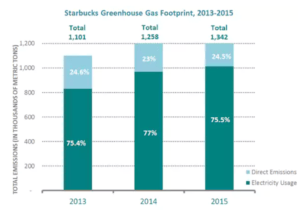 Second, Starbucks should consider facilitating the growth of coffee farms in geographies that traditionally have not been well suited to grow coffee. “The optimal temperature to grow Arabica coffee is 64o-70o F, which is most commonly found in upland elevations of tropical countries” [9]. Though climate change will reduce yield in these regions, it may make California’s southern coast – according to Willem Boot, a consultant to the coffee industry – and other similar regions around the world more suitable for coffee cultivation [10]. Effectively, this would serve as a long-term hedge against reduced coffee production from current suppliers.

As Starbucks continues to combat the negative effects of climate change on its supply chain, there are two open questions it must consider: one, what responsibility, if any, does it have in supporting the current coffee growers who are at risk of losing their livelihoods; and two, should it pass on the incremental costs of improving sustainability and reducing carbon emissions to consumers? 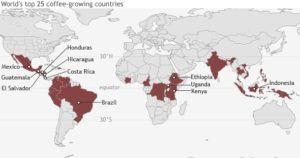 Can a digital life translate to digitizing Life (Insurance)?

Tokyo’s surprise for the 2020 Olympics – Hydrogen, the energy for next generation