There are very few people in the world who don’t instantly recognize the brand name of Starbucks. As the world’s largest premier roaster, marketer and retailer of coffee, tea, and other food and beverage offerings under an assortment of brand names – including its namesake Starbucks, Teavana, Tazo, and Ethos – the business and operating model is heavily reliant on the supply-demand dynamics of specific agricultural commodities, particularly Arabica coffee beans. Starbucks has recognized the importance of confronting the implications of this incredible reliance and has been proactive for many years around the issue of climate change, given that agriculture faces enormous exposure to the consequences, and how they plan to adapt (1).

In September 2016, the Climate Institute, a nonprofit organization that works to increase global awareness and action around climate change, published a report highlighting the threats of climate change to the world’s coffee supply. A slight change in temperature, sometimes just half of one degree, or humidity and rainfall doesn’t just impact the quality of coffee beans, in terms of flavor and aroma, but also the quantity of beans that can be harvested. For example, in Tanzania, coffee crop yields have fallen by 50% over the last 50 or so years. Moreover, changes in climate have led to a proliferation of plant diseases, like the fungus called Coffee Leaf Rust, and pests, like the Coffee Berry Borer, which has caused even further declines in yields. Coffee producers in Guatemala lost between 50% and 85% of their crops in 2012 after an uncommon increase in temperature and rainfall led to the spread of the Rust fungus into areas it had previously never been seen. Across the ocean, in the Congo, the Coffee Berry Borer has caused damage of more than $500 million every year as they move into areas that have become warmer, wetter, and thus more hospitable (2).

Starbucks has been exceptionally nimble in responding not just to the issues posed by decreasing coffee yields resulting from climate change but also in supporting the farmers whose livelihoods and welfare hinge upon the survival of their coffee crops in the long term (3). In fact, a report by the International Coffee Organization back in 2002 estimated that the livelihoods of over 125 million people across the globe depend on the income received from coffee crops (4).

As a company, Starbucks has taken several measures to combat the problems that it and its suppliers are facing. At a high level, they are focused on running a more sustainable and environmentally friendly business in order to keep from further contributing to climate change. They carefully track their own greenhouse gas emissions, as can be seen in Exhibit 1 below (3). They are also focused on purchasing larger quantities of renewable energy and have committed to the RE 100, a group of large corporations that have committed to eventually using 100% renewable power to fuel their operations (5). Starbucks has also supported farmers directly by promoting and supporting farming practices to help improve crop yields. Furthermore, they have started experimenting with breeding new types of coffee plants that are more resistant to diseases, pests, and / or changes in temperature and moisture. While these projects are still on a small scale, the company is distributing modified coffee plant seeds to farmers in the coffee industry’s version of open source (6).

But there is plenty of room for improvement. Tracking and quantifying their own greenhouse gas emissions footprint is simply not enough. Again, looking at Exhibit 1, we can see that total emissions have gone up over the three-year time horizon. Starbucks should hold themselves accountable to their customers and shareholders for actual reductions. Given that their business continues to grow and that absolute numbers may not indicate underlying improvements, I would recommend they do this on an emissions-per-store basis that scales the comparison.

On the whole, Starbucks is a pioneer in tackling the impacts of climate change on its business model – but it is important to remember that it’s taking action because the repercussions of not doing so endanger its profits and ultimately its very existence. I believe the company has done well so far but it needs to step up its game if it’s going to make a real difference. 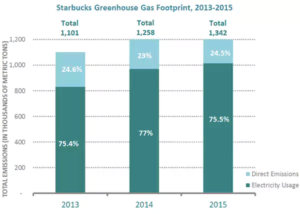 2. The Climate Institute’s A Brewing Storm: The Climate Change Risks to Coffee: http://fairtrade.com.au/~/media/fairtrade%20australasia/files/resources%20for%20pages%20-%20reports%20standards%20and%20policies/tci_a_brewing_storm_final_24082016_web.pdf

Do Judge a Product by its Packaging

8 thoughts on “A Latte on Their Mind: How Climate Change is Endangering Starbucks’s Business Model and What They Need to Do About It”