It is November at the capital of capitalism and many of Harvard Business School’s ambitious first-year MBA candidates are gearing up for the annual “RC Ski Trip”. Keystone, Colorado will welcome a plethora of tourists; and its local economy, particularly the hospitality industry, will benefit greatly. However, many of the world’s largest hotel chains are asking themselves: as sea levels rise, snowfall declines and coral reefs fall apart, how will we survive in certain cities, regions and countries driven by tourism?

Tourism and the hospitality industry have been important aspects in the economic development of many regions in the world. In the 1970s, cheap flights and mass tourism incentivized developers to flock, build and collect as quickly as possible. Unfortunately, hotels and resorts were not built with green initiatives in mind. Additionally, once built, many hospitality operation practices did not include water, waste or energy reduction programs. It is estimated that water can account for up to ten percent of a hotel’s total utility bill, the average hotel guest produces more than one kilogram of waste per day and hotels emit an average of 20.6 kg of carbon dioxide per night. With statics such as these, how can the hospitality industry add the environment and climate to its bottom line? Let us examine Hilton Worldwide.[1][6]

Hilton Worldwide collected roughly 11.27 billion U.S dollars in revenue in 2015. This figure only trails InterContinental Hotel Group and Marriott International. Hilton Worldwide operates 737,922 rooms in 4,480 hotels. The company operates hotels in many of the world’s most tourism dependent countries.[3][7] 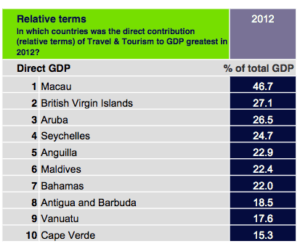 Climate change will have a direct negative impact on many vacation locations were Hilton Worldwide has numerous hotels. For example, as temperatures rise in the Caribbean, tourist arrivals decrease.  Examining this further reveals the low-impact scenario of rising temperatures in the Caribbean results in a loss of $715 million dollars in tourist expenditure. The high-impact scenario results in a loss of $1,430 million dollars in tourist revenue. It is evident that Hilton Worldwide and the border hospitality industry will be greatly impacted by climate change prompting hotel closings and decreased profits. So what steps have Hilton Worldwide taken to ensure tourism and profits do not decline while contributing to solve climate change? [5]

Through innovative partnerships and initiating operational initiatives the company’s response is improving the environment and conserving resources. Examples of their actions to date include:

Four Hampton by Hilton hotels in Albany, N.Y partnered with General Electric and SkyChargers to install electric vehicle recharging stations on their properties. Travelers can reduce their carbon impact by renting an electric vehicle and then recharge it using the SkyCharger station at the hotel.[4]

Hilton Amsterdam partners with GRO-Holland to collect coffee grounds to use as a base to grow mushrooms. The mushrooms are then processed into vegetarian food items that will be sold in the hotel. The hotel has researched the positive environmental effects of Vegetarianism and how it significantly cuts our dietary carbon footprint. Hilton Amsterdam’s goal is to raise awareness and educate the community on waste reduction and alternative diet options that benefit the environment.[4]

Hilton Foshan volunteers time to collect and pack coffee waste generated by the hotel every day. Once collected they will use these coffee grounds to remove humidity and improve the air quality in rooms by creating an organic plant fertilizer. The hotel is also packing coffee for the local community, schools, landscaping units and farms to use as fertilizer.[4]

What More Can Be Done

Although Hilton Worldwide programs have done a tremendous job thus far, more can be achieved. A few recommendations I believe the organization should consider include:

While I understand these recommendations cannot be easily implemented and will require support from executives and employees alike, we have to ask ourselves what type of world do we want to leave for our children and grandchildren?

Hess Corporation: Can Oil Companies Be Part of the Solution…Or At Least Less of the Problem?

Student comments on A Hotel Under Water? Hilton Worldwide