A Platform to Reduce Piracy

Digital transformation changed the way we consumed music. Nowadays, streaming music is almost an indispensable part of the everyday life. In the Middle East, however, things were not the same as in the developed world. Piracy, the illegal consumption of content, is a big problem there. In 2012, it was reported that 95% of the music consumed in the region was pirated [1]. Two Lebanese entrepreneurs, Elie Habib and Eddy Maroun, presented a solution by offering a mobile platform called Anghami, often dubbed as the Spotify of the Middle East. There was no way to legally consume the music as people did in developed countries, and they thought Anghami could remedy the issue. Anghami became the uncontested leader by reaching out to 60 million users and offering the largest music catalog available in the Middle East [2], [3]. Figure 1 shows selected screenshots. 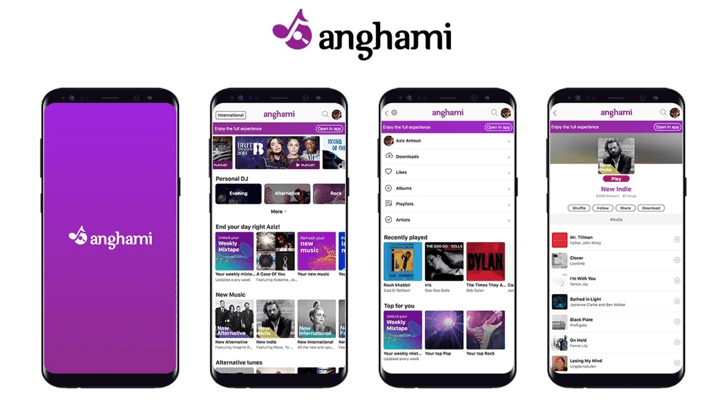 Attracting users to engage with Anghami was critical. The co-founders implemented an algorithm that provided valuable insights. Machine learning brought light on stressful experiences in user engagement. For instance, it analyzed the registration journey and revealed that 30% of the prospective users who downloaded the app ended up not registering. This was, in fact, tied to most users in the Middle East being tech-illiterate and not knowing how to register and use a mobile app. This takeaway allowed the company to take steps in easing the registration and offering a simple-to-navigate experience. One solution the company adapted afterwards was not asking for anything from the user and extracting all necessary input from the mobile phone instead. All needed from the user was to tap the register button and the app took care everything [3].

Anghami offered a freemium subscription scheme – an ad-supported plan with limited features were offered for free and premium features and no ads were offered to paid users. In the long run, Anghami had to convert free users to paid users in order to generate profits and fund the growth and increase the level of engagement of users with the app for that. One solution for that was recommending a list of tracks resembling the user’s music taste. Anghami’s machine learning algorithm, by examining and filtering the user’s interaction with the app, offered a weekly personalized playlist called “Your Weekly Mixtape”. For each user, the algorithm ensured the suggested tracks have not been recently played and are unique for the user. It also took into account the probability of the user being accustomed with the artist in each track, balancing between tracks that user is familiar with and that the algorithm thought the user should listen [4]. Figure 2 shows the level of interaction of users with Mixtape and Figure 3 shows a sample of reactions to Mixtape. Data allowed Anghami to provide more relevant content and improve its user experience. As Habib pointed out, “Anghami is music, but at core we are a data company.” [5] 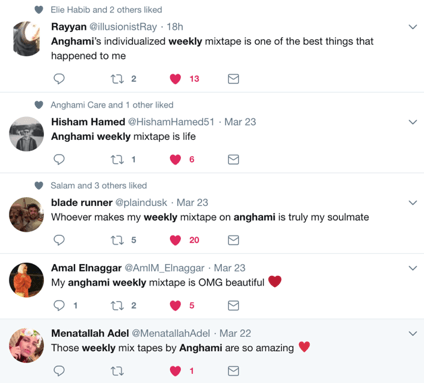 Anghami can further take advantage of data to have more engaged users, reduced churn rates, and more conversion. Only 5% of Anghami’s user base was paid users. (Spotify has around 46% [6].) Going back to the piracy and engaging users, Anghami can have more targeted user acquisition by observing Internet users and target them accordingly. The most common way to consume illegal music was downloading content from YouTube. In order to have more targeted marketing, Anghami can work with YouTube to understand the preferences of users who are pirating and provide offerings to them for subscription. Moreover, Anghami can use the consumption patterns and improve its decision making in expanding its library. This will also provide a bargaining chip in contract negotiations. Analyzing users’ taste will allow the company to have more efficient content management and better managed label costs. Another value-add for machine learning algorithm in the long term for Anghami can be providing guidance to artists and bands in planning their new content releases as well as concerts and tours depending on the consumption patterns and user preferences.

Machine learning has expensive infrastructure costs and needs talent, even in developed markets. How can a startup from an emerging market with very limited resources provide a sustainable solution without damaging its user experience?

Although the region had no restrictions to preserve user privacy, it is realistic to expect regulations similar to that of EU in the future. (Bahrain has recently adopted a data privacy law that resembles EU’s privacy protection efforts [7].) How can a company similar to Spotify tackle this problem without having Spotify-like resources?

Personalized Styling at Scale: What is the right balance between machine and human input?