Why is nuclear energy important?

Earlier this year, the U.S. Energy Information Administration presented an analysis (Exhibit 1) showcasing the consumption of energy by type. There were a few interesting takeaways from this analysis: 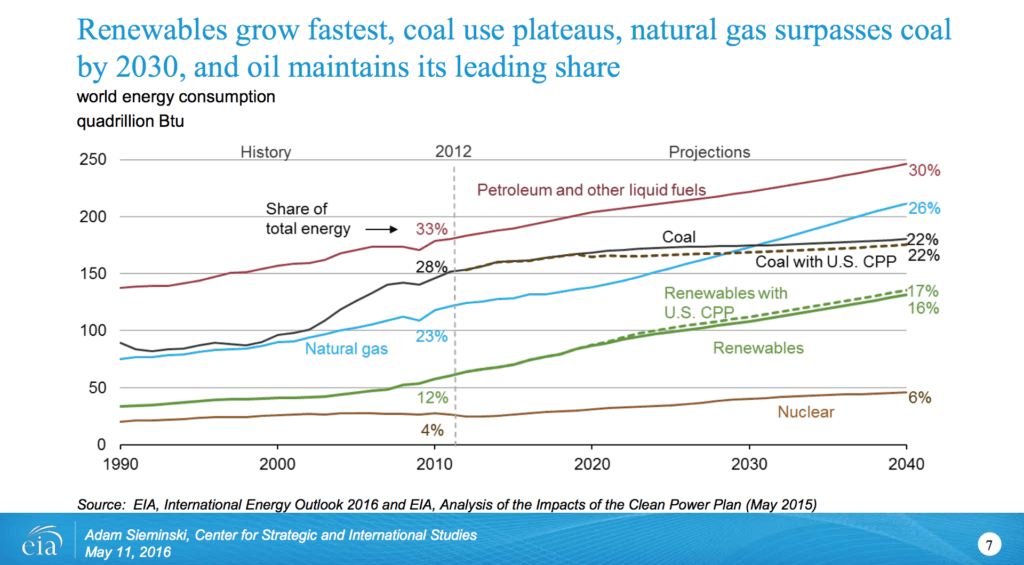 While the growth in renewable energy sources will help reduce the negative impact on the environment, it will not be enough to meet the increase in global energy demand. So, which source of energy can help us bridge the gap? Nuclear energy.

In the United States itself, over 750,000 metric tons of depleted uranium sits useless. TerraPower plans to convert this nuclear waste to generate electricity that can potentially power all U.S. households for more than 700 years. [2]

TerraPower believes that while many forms of energy will play a crucial role in addressing the energy crisis and reducing greenhouse gases, we will need to develop improved nuclear energy technology to take advantage of the vast amount of nuclear waste. To help with this, TerraPower is building a traveling wave reactor (TWR), which will burn fuel made of depleted uranium. As a result of burning the fuel, the reactor will generate heat and produce electricity. [3]

How effective and safe is this traveling wave reactor (TWR)?

In comparison to the conventional nuclear reactor, the TWR is 50 times as efficient as and more economical. Besides being more efficient, the reactor also has several safety features that allow it to be automatically shut down in case of any emergencies. [4]

What’s the current state and what has TerraPower done so far?

TerraPower was founded in 2008 and since then, it has been funded by Bill Gates. Since its inception, the company has conducted several computer model simulations and has changed their strategic approach multiple times in search for a cost-effective, safe, and reliable solution.

In September 2015, the TerraPower signed a deal with the China National Nuclear Corporation (CNNC) to jointly work on a 1150 megawatt-electric liquid sodium-cooled fast reactor. In terms of execution and next steps, TerraPower and CNNC plan to build a 600MW prototype between 2018 and 2023 in China. The prototype will primarily be developed to test the plant equipment, qualify the fuel and materials for longer use, and build the economic basis for commercializing TWRs. If the testing proceeds as expected, the 1150 MW commercial plant will be built in late 2020s or early 2030s. [5]

What will be some challenges for TerraPower?

While TerraPower has gained significant momentum in terms of receiving funding and signing a deal with the CNNC to build a prototype, it still has a long way to go in terms of proving the concept and commercializing the TWR.

In terms of risks, the company will need to work on addressing the following challenges over the next few years:

Even though there are significant challenges, I remain optimistic about this venture to explore the use of nuclear energy and unlock its full potential to help meet the global energy demand increase by 2040.

Can a “Brown” Consolidator Lead the “Green” Revolution? — David Crane and NRG Energy

Student comments on 700 years of electricity from nuclear waste? Can TerraPower do it?