“The toy industry will always look to see if it can use technology to enhance the ‘wow factor’”, John Baulch, publisher of Toy World magazine, told the BBC [1]. While there is no doubt that additive manufacturing (“AM”) has transformed the economics of manufacturing across the automotive, aerospace, medical and consumer industries, this breaking technique still enjoys a niche status in the toy industry. However, the significant research and 3-D printing invention efforts led by The Walt Disney Company (“Disney”), the toy manufacturer and media giant, point that this revolutionary shift is already on its way.

According to Michigan Technology University, the 2020 toy and game industry is estimated to be worth $135 billion, “with 3-D printing bringing those profits home” [2]. As Exhibit 1 shows, this is one of the few industries that enjoys a balanced distribution across the key attributes motivating the use of AM: customization, speed & efficiency, and cost savings. While personalized Disney products for children are popular at theme parks and stores, 3-D printed toys offer more sophisticated customization and can be ordered from home [3]. Furthermore, “although the direct costs of producing goods with these new methods and materials are often higher, the greater flexibility afforded by additive manufacturing means that total costs can be substantially lower [4].”

The additive advantage has led Disney to explore the field of 3-D printing. In 2014, the company’s research team designed and manufactured a 3-D printer capable of producing forms from soft fibres, such as wool. This contrasts with AM’s traditional focus on the use of hard materials, such as plastic and metal, to produce objects. Toys manufactured using hard materials could be unsafe for children, given that rough, porous surfaces are hard to sanitize and could be sharp. The use of soft materials “opens up new possibilities in the creation of interactive objects which are soft and flexible, and so more suitable to be worn or simply held close [5].”

Last year, Disney filed a US patent for a 3D-printed, interactive, soft robot. While the patent doesn’t reveal the specific end-use of the robots, it does indicate that they will be interacting with children [6]. The company has also been developing a design system that allows casual users to create 3-D printable robotic creatures, providing ample room for customization. According to Disney’s research team, “the recent progress in 3-D printing technology and the advent of powerful, simple-to program hardware platforms now open the door to a new generation of personal robots – unique companions that we custom design according to our needs and preferences” [7].

Chief Strategy Officer, Kevin Mayer, referred to 3-D printing as “a future technology that’s going to be important to us as a company” [3]. To remain competitive in the medium to long term, Disney is investing in and assisting the 3-D printing technologies of young companies. In 2015, Disney struck a licensing deal with MakieLab, a 3-D printed toy manufacturer that allows children to customize dolls’ physical appearance and clothes via their site online. The London-based start-up was acquired by Disney a year later.

Disney’s research arm has also been working with Open Bionics, a prosthetics maker, to develop character-based limbs for children. “The made-to-order devices will resemble Iron Man’s gloves or snowflakes from “Frozen,” for example. The start-up estimates 10,000 children worldwide could benefit from the initial product [3].”

As Disney moves forward with 3-D printing, there are several obstacles that they should anticipate. For instance, the company will have to determine the real cost-competitiveness of product customization. According to the BBC, “so far the small number of other companies that have developed 3D printing methods have found that the resulting products end up being expensive and have targeted them at adult collectors, rather than children, as a result” [1]. Upsurge demand for home-delivered AM products will also spark questions regarding the geographical proximity of the 3-D printing facilities to customer homes, as well as shipping costs.

Disney should also explore additional trademark protections against the threat of copies, given the ease of downloading designs and creating toys at home using AM [1]. According to Deloitte, the toy industry could have sustained up to $15 billion in AM-related intellectual product theft in 2016 [8]. Disney could potentially open-source some of its designs and focus on the unprintable components or encourage the open-source community to design accessories to make the toys more valuable. According to Joshua Pearce, a professor at Michigan Tech, “this is already happening – there are literally millions of free designs” [2].

Despite Disney’s enthusiasm to achieve new levels of innovation, critical questions regarding the viability of AM products remain: Should Disney wait for AM technology to mature before continuing to invest in it? How should Disney determine the optimal combination of traditional and personalized product offerings? 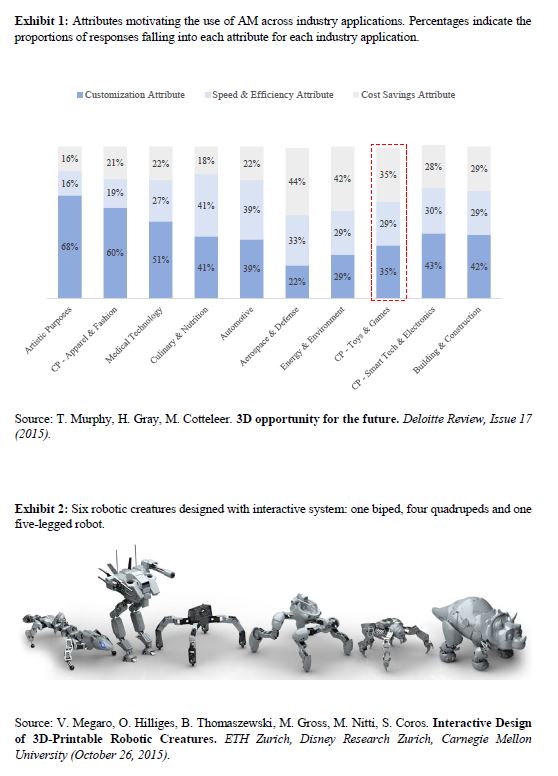 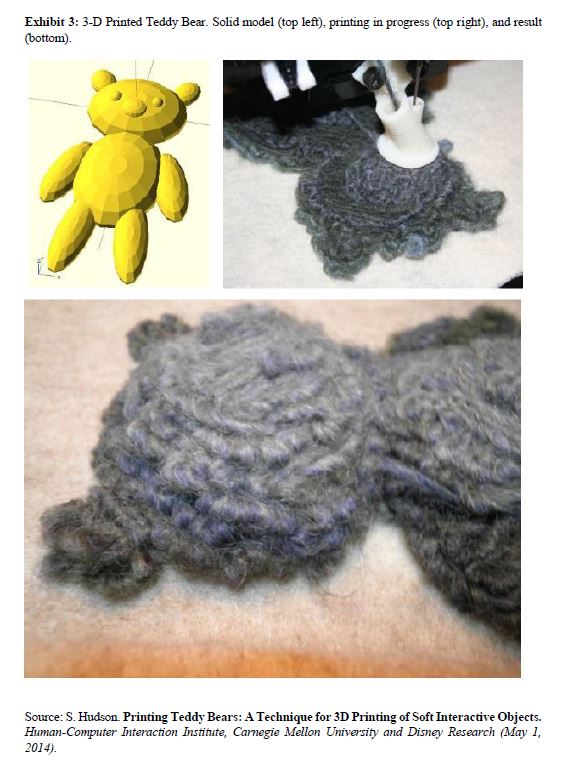 Lots of Chocolate for Me to Eat