Zooniverse if a platform that allows anyone to become a researcher by posting research projects for volunteers to partake in as well as allowing volunteers to post their own projects to gain help on. It was born out of Galaxy Zoo project which asked users to inspect galaxy images and classify them as spiral or elliptical in order to better understand the universe we live in1. The goal is to enable research that would not have otherwise been possible without the power of the masses2.

Zooniverse leverages volunteers to help analyze information more quickly and accurately which saves time and money, helps advance the ability of computers to do the same tasks, and leads to a better understanding of the world2. Projects are posted across a range of topics including Arts, Biology, Language, Climate, Medicine and Space. Some example projects include “Help transcribe documents from the Parochial Archives Project in Rome” and “Help us track Solar Storms through space to improve space weather forecasts3.” By gathering responses and data from thousands of users, Zooniverse is able to cut down on error and gain reliable outputs. Projects range in difficulty and skills required but there is a project for everyone. They involve everything from marking spots on a planet (something almost anyone can do) to transcribing Arabic scribes.

Value is created for volunteers in a few ways. First, they are given an opportunity to make a difference. Some volunteers have made scientifically significant discoveries and get to be part of scientific breakthroughs. Each project lets volunteers know what % completion the project is at, how many volunteers have contributed, how many classifications have been made, etc. As discussed in class, showing users the large number of volunteers that have already been working on the project encourages more to join as they feel they will have meaningful impact. They are also given an opportunity to work on things that interest them whether it be transcribing anti-slavery manuscripts, working to discover new galaxies or interpreting brain scans. Second, they are given a community. There are Zooniverse discussion boards where volunteers can work together and with research teams to collaborate a variety of projects. This sense of community keeps many volunteers coming back. Finally, volunteers can post their own projects and leverage the community for help on what matters to them. The value that volunteers find in Zooniverse is evidenced by the over one million people around the world who have contributed5.

The results of this collaboration have been powerful and there have been many published research papers and discoveries that have come out of the projects. For example, in 2017, just 48 hours into a project to search for new planets, never-before-identified four-planet system in the constellation Aquarius was found4.

One challenge is that anyone can sign up and help with research projects which, as with many other crowdsourcing sites, makes it vulnerable to people who add false information. Zooniverse is able to combat this with numbers. Each of their projects includes thousands of people performing the same tasks so any errors can be spotted and removed.

Zooniverse is poised to continue growing for many reasons. First, as they’ve allowed users to create their own projects, the variety of opportunities for volunteers has grown and allows them to find something they’re truly interested in working on. Additionally, the nature of the projects allows anyone to partake creating a large potential volunteer base. Finally, as Zooniverse volunteers have been making more significant discoveries, they have been gaining more press which encourages people to join as they feel they can make a difference too. As the world and especially millennial become more concerned about the future of our planet, they will be more drawn to opportunities to contribute to projects. The graph below shows growth through 2012 which has continued through today6. 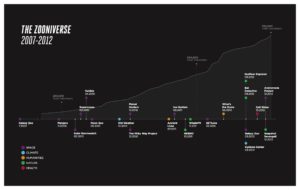 Fundrise – Real Estate investment for everyone?

1 thought on “Zooniverse: Anyone Can be a Researcher”