Zillow was funded in 2006 with the objective of serving the full lifecycle of owning and living in a home: buying, selling, renting, financing, and remodeling. With this goal in mind, the Seattle based firm was aiming to bridge the information asymmetry that characterized the Real Estate industry by integrating the data of millions of transactions into one platform. Today, Zillow’s platform contains information about more than 110 million US homes (including on and off the market), allowing it not only to compete as a connecting platform that brings together buyers and sellers, or tenants and landlords, but also providing the necessary information to make this relationship honest and balanced.

At the core of Zillow business model is the aggregate data of each one of the properties mentioned above. This enables the platform to provide a series of services to its customers. It starts with interactive city maps with filtered information on recent property transactions. Zestimate is Zillow’s estimated market value for an individual home and is calculated based on its 110 million homes. It is a starting point in determining a home’s value and is not an official appraisal. The Zestimate is automatically computed three times per week based on millions of public and user-submitted data points. Early this year, Zillow launched the Zillow Dashboard, a sophisticated tool that facilitates the information exchange between multiple listing services (MLSs), brokers and Zillow. Based on these offerings, Zillow is able to attract millions of customers every year, which in turn translates into more demand and more information to keep building its platform. Thus, average monthly unique users (which reached 85,979 in 2014) and user-generated content additions (which had been growing at rate above 100% YoY on a quarterly basis) are closely track by the firm since they are at the core of their ability to keep improving its value proposition. 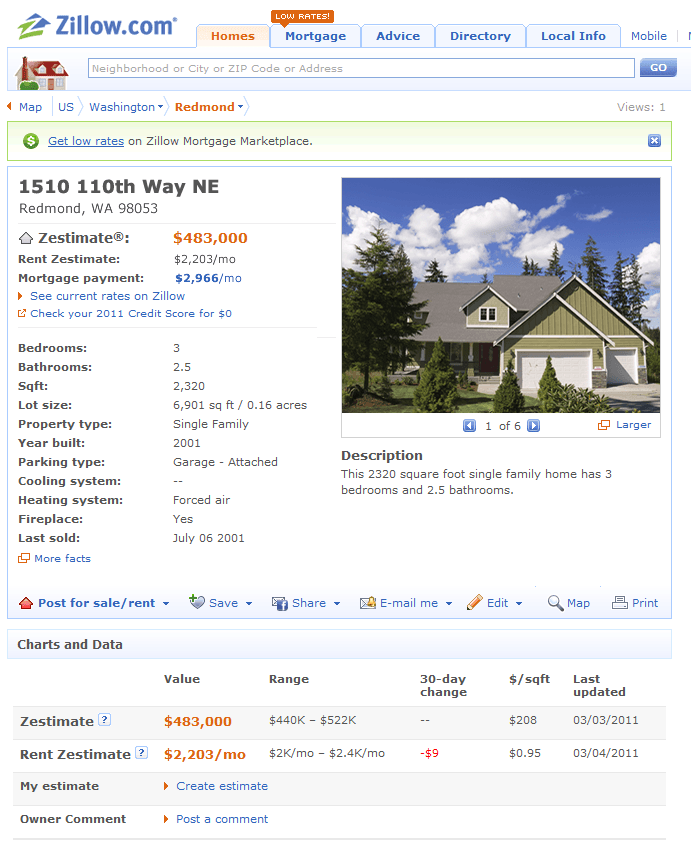 Despite, it hasn’t been a straightforward path for Zillow. In 2007, the Wall Street Journal studied the accuracy of Zillow’s estimates and found that they “often are very good, frequently within a few percentage points of the actual price paid. But when Zillow is bad, it can be terrible”. This uncovered one of the hurdles that even network effects would find hard to overcome. Given the geographic component of real estate, higher density locations are easier to address but other places have higher marginal costs to serve. This posed a threat to Zillow’s model despite its efforts. According to Fortune, “Zillow has Zestimated the value of 57 percent of U.S. housing stock, but only 65 percent of that could be considered ‘accurate’—by its definition, within 10 percent of the actual selling price. And even that accuracy isn’t equally distributed.” Fortune cited the state of Louisiana as an example, where “the site is just about worthless”.

Growing the business has not been an easy task for Rich Barton and Lloyd Frink, co-founders of Zillow and former Microsoft executives. With information at the core of its value creation process, it was not enough to build a platform to bring together buyers and sellers, landlords and tenants. Given network effects are the main source of competitive advantage to build a valuable product, the increasing available data at a lower marginal cost was fundamental. Thus, the strategy adopted has plagued to road with acquisitions. Postlets, RentJuice.com, HotPads, StreetEasy, Dotloop and Trulia are some of the illustrious names that have become part of the Zillow Group. When asked about the acquisition of Trulia in April of 2015, Zillow’s CEO Spencer Rascoff declared: “We bought Trulia because operating multiple, leading, consumer brands will allow Zillow Group to achieve huge audience scale and provide cost savings and efficiencies. I am more convinced than ever that this is the right strategy, which will achieve tremendous long-term scale and a longer term target operating model of EBITDA margins above 40 percent”.

It is clear that Zillow has been able to build a platform leveraging network effects to strengthen its position. Despite, in a market in which network nodes are far apart, it will still require an important effort to keep increasing its reach and expanding its reach.

Teladoc: How network effects are evolving in the world of telemedicine