In July 2011 total US multichannel households (the combination of households that subscribe to television through cable, satellite, and / or telco) peaked at 105M, according to Nielsen[i]. By 2013, this number had shrunk to 101M. A combination of rising prices, improved alternatives (driven by Netflix and other non-subscription outlets such as YouTube), and sharing of TV Everywhere passwords had greatly eaten into the subscribers and therefore earnings of both TV producers and distributors. Trying to disrupt themselves on the low-end, TV producers partnered with Dish to launch the first Over the Top (OTT) service, called Sling TV. Sling TV delivered a limited set of “cable” networks over the internet to customers for a reduced price of $20 – versus the average price of ~$80 for a similar Expanded Basic package – with slightly reduced features.

Fast forward to today, and myriad OTT services exist – Sling TV, AT&T’s DIRECTV Now, Playstation Vue, Hulu Live, and YouTube TV being the most notable. Strategies for these OTT players vary: Sling TV has created two services which target different customers interests in a confusing fashion, DIRECTV Now and Playstation Vue have sought to purely replicate the networks offered via traditional cable or satellite, and Hulu Live leverages its ownership by leading TV producers (Disney, Fox, NBCU and Time Warner) to distribute those networks, marketing the live service alongside their licensed current and past season content and original programming. The below chart lays out (a slightly outdated version of) the various choices. 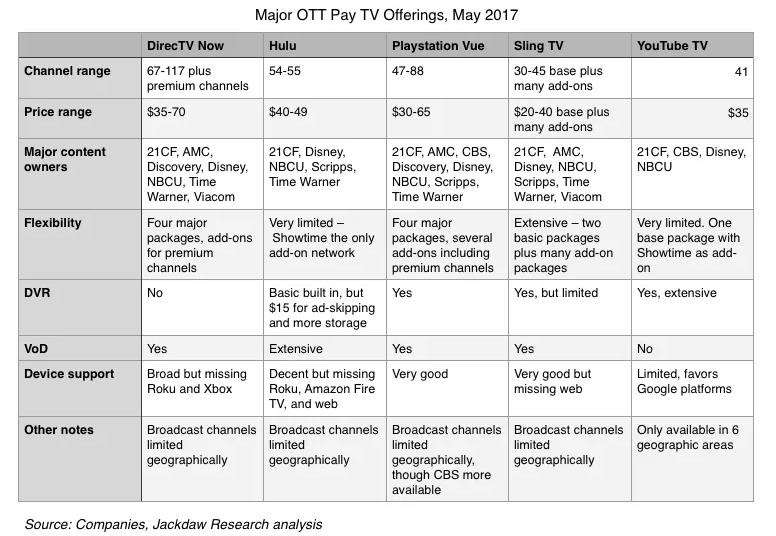 Not shown explicitly on the chart is what makes YouTube TV the most compelling – its ability to pay less in content fees due to the extensive user-generated content available on YouTube already, thus allowing it to see improved profitability compared to its competitors.

User Generated Content: Absent from YouTube TV’s current distribution is a staple of cable channels – Food Network. At 92.6M according to Nielsen, Food Network is the most widely distributed cable network in the US. However, when building YouTube TV, the content licensing team must have felt that the food videos already on the site – from producers such as Tastemade – could offset the loss of Food Network. At $0.24 per subscriber, Food Network represents only a drop in the bucket of total content spend, especially with ESPN charging over $8 per sub[ii]. However, when combined with other Scripps owned networks such as HGTV ($0.21), Travel Channel ($0.16), DIY ($0.11), Cooking Channel ($0.10), etc., YouTube is saving almost $1 per sub by purely substituting content it already has access to for free. (Note that Scripps would likely have forced YouTube to take all of its networks if YouTube wanted Food Network). YouTube has also elected not to license Viacom content – present on DIRECTV Now and Sling TV – for similar reasons; Viacom’s millennially targeted content on networks such as Comedy Central, VH1, BET, etc. can be replaced by YouTube comedy stars. Indeed, Elrubius’s comedy focused YouTube channel has over 27M subscribers!

Profitability: TV’s golden age translates into huge content spend for distributors, led by Netflix’s $8B 2018 spend. However, this spend hasn’t translated into profitability – for example, despite reaching 17M subscribers in 2017[iii], Hulu’s losses nearly doubled from $531M in 2016 to $920M in 2017[iv]. Thus, “winning” in this market requires (1) deep pockets to get the business off the ground and (2) an ability to be profitable in the short term. YouTube TV, through its parent Google, has both. As the above chart shows, YouTube TV offers fewer channels at its $35 price point. According to MoffettNathanson research, DIRECTV Now’s service featuring 67 networks for $35 per month is making roughly $1 per sub on a gross margin basis.[v] 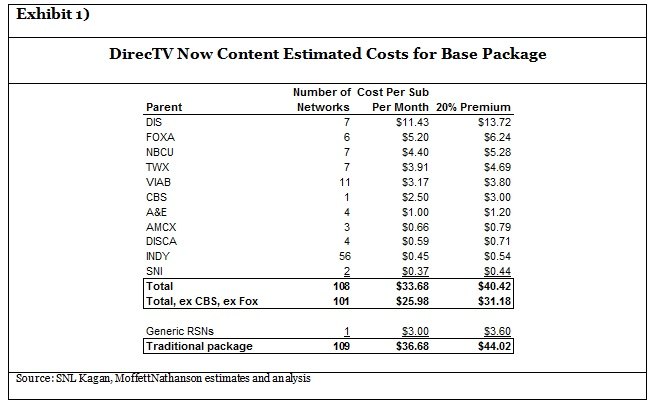 Although similar analysis doesn’t exist for YouTube TV, its focus on fewer, more important networks likely leads to improved profitability and a greater chance to weather the transition from traditional cable / satellite distribution of TV to an internet first world.