Founded in 2004 by two former Paypal employees, Yelp is a multinational company with the mission to connect people to great local businesses. In terms of average monthly unique visitors in the last quarter, 29M visited via the Yelp app, 64M visited via mobile web and 77M visited via the desktop. Mobile is increasingly a priority, as 79% of searches on Yelp and 65% of Yelp reviews were done on a mobile device during the last quarter.

Contrary to popular belief, Shopping is the largest category in terms of reviews, representing 21% of reviews on the platform, while Restaurants is a close second with 17%, and followed by Home and Local Services with 14%.

Yelp’s business model consists of offering the site for free to users and majority of its revenues from advertising and other value-added services to businesses.

From the beginning, the company saw accurately that the willingness of pay on a restaurant review site would come from businesses, not from restaurant goers, and that in order to be a valuable platform, it needs to attract high user traffic and people who would be willing to generate useful content – the reviews. Once Yelp has the user traffic and user data, it has a better value proposition to sell ads and tools to local businesses.

For users, they have a free and convenient way to search for local businesses based on their current location or a specified location, see a variety of information in one place, including a 3rd party source of information (users reviews and photos) that can be perceived to be less biased than just what the business owner provides on its website. Thus, the element of trust on Yelp’s reviews is critical, for its relationship with both users and businesses. In the past, the company has faced backlash in the past due to suspicions of fake reviews or rumors that the company asked businesses to pay to remove negative reviews.

There is also a social element through Yelp’s community forums, and exclusive benefits for heavy Yelp users through its Yelp Elite Squad program. Other benefits added in recent years include Cash Back and exclusive promotions.

For businesses, they can claim their free business page with access to the large user base, receive limited free services such as responding to reviews and tracking user views and customer leads. In addition, they can choose from tiered pricing structures to find more extensive tools.

Yelp makes money through selling ads and other value-added services that a business might not be able implement itself. Implicitly, it’s selling the data it has gathered on its users. Early this month, Yelp has announced giving advertisers more control and customization, as an response to advertisers’ complaints. Another example is Yelp Wifi, a new customer retention and marketing analytics platform that allows businesses to gather more info about its customers that login to the business’ free Wifi when in the store. Importantly, Yelp has done a good job of tracking metrics that demonstrate Yelp’s contribution to the business (e.g. mobile calls to a restaurant or # of mapped directions from its Yelp page) 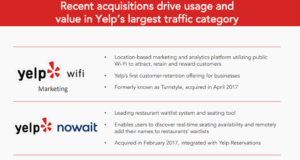 Developers – another side of the platform

Users and businesses are the primary two sides of the platform, while a lesser known third side is developers. Yelp offers the Yelp Fusion program and APIs for developers to create value for their own website customers by leveraging Yelp’s comprehensive data on businesses. For example, the dating website Coffee Meets Bagel (CMB) has integrated with Yelp to seamlessly recommend date spots and show Yelp reviews to CMB customers, which ultimately helps drive more traffic to Yelp. 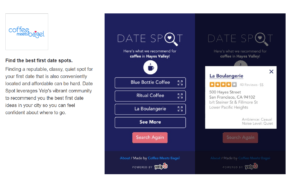 There are strong same-side and cross-side network effects. On the same side, as more users join Yelp to post photos and write reviews, more users are attracted to join Yelp to see that content and be part of that community to interact with other fellow customers of a business. On the cross-side, as more users join Yelp, local businesses also want to establish their presence on the platform to help provide accurate business information, respond to customer reviews, as well as benefit from Yelp’s analytics tools to learn about their page visitors.

However, network effects are generally isolated within each category. Lots of restaurant reviews on Yelp might not be enough motivation for a plumber to buy an ad or set up a business page, and users who search for restaurants may need to be prodded by Yelp to consider searching other categories. For Yelp to expand successfully to more categories, users must believe that Yelp is more than just a platform hosting reviews, and must provide unique value-add services and convenience even when the number of reviews for a business may be low at the beginning.

Today, Yelp has an early mover advantage that gave it a strong brand association with reviews, likely the largest database of reviews (148M cumulative reviews), and years of data on its users that can help the company provide better targeted ads. However, there is also increasing competition from players with similar offerings (e.g., Google My Business, Facebook Local, TripAdvisor, YP.com). 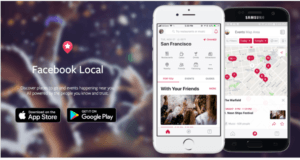 Yelp also faces niche competitors in specific categories, such as Angie’s List for home services. In addition, many companies combine multiple services, such as Opentable with reservations and reviews. To compete, Yelp has established its own Yelp Reservations, and done partnerships with Grubhub to offer ordering and delivery within Yelp, to further complete the customer journey for dining in and out.

Lastly, it’s relatively easy for the casual Yelp user to multi-home, since all the sites are free and easy to access. In response, Yelp has worked to improve the user interface, add exclusive promotions, and product features such as creating and sharing bookmark collections, to make its product stickier. In 2017, Yelp has launched Yelp Nowait, allowing users to discover real-time seating availability and remotely add their names to restaurants’ waitlists.