Founded in 2001 by Jimmy Wales and Larry Sanger, Wikipedia is one of the most trafficked sites on the world wide web and the, “most popular general reference work” on the internet.  Established to harness the collective knowledge of the world and to create a crowdsourced and openly edited encyclopedia, Wikipedia now hosts over 40 million articles in 299 different languages.  The name is the perfect amalgamation of the organisation’s goal and illustrating how it was to be built.  The second half of the word, ‘pedia’ is taken from ‘encyclopedia’ and the first half of the word, ‘wiki’ is a reference to how the founders planned for the site’s content to become populated.  “A wiki is a website on which users collaboratively modify content and structure directly from the web browser.”  From its inception, Wales and Sanger had set out to build a site that utilised the power of external crowds for value creation. 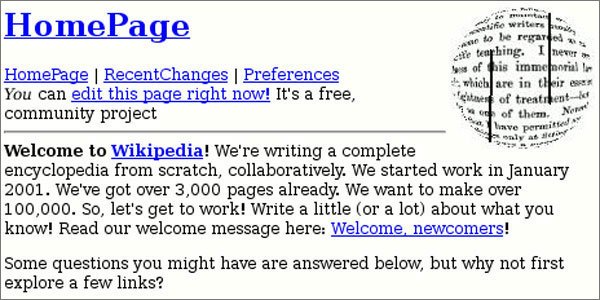 Wikipedia was initially launched as a for-profit enterprise whose mission was to create a complete encyclopedia from scratch by using the power of all internet users.  From its very first days, Wikipedia set a, “neutral-point-of-view” policy for the website stressing that the site’s focus was to have accurate and up-to-date information, not to act as certain individuals’ moral outlets on the internet.  Asides from this, there were relatively few rules for the site or its users, which helped to encourage article creation and participation, though did not assist in ensuring the quality of the information was accurate.

In 2002, the Spanish Wikipedia became worried about commercial advertising and the lack of control over the entries in Wikipedia and created their own version of the website called, The Enciclopedia Libre.   These moves encouraged the founders to announce that moving forward Wikipedia would not accept commercial advertising on the site and would move to a .org, non-profit model.  External crowds were now helping to shape the very structure and essence of the organisation, as well as its content.

Wikipedia’s management of its articles has followed the Procrastination Principle.  Originally, any person could edit or publish an article at any point with minimal-to-no fact checking done by a moderator or by an Wikipedia employee.  As the popularity of the website increased, it became clear that implementing restrictions around unlimited access to posting with no checks would potentially damage the site as the credibility of the information became more important as an increased number of users wished to start quoting Wikipedia as a trusted source.  The restrictions, whilst not popular across the site, proved to be a good idea as in 2005, Nature published an article that studied 42 science articles in the Encyclopedia Britannica versus in Wikipedia and found that the quality of the information in Wikipedia was almost on par with that of the Encyclopedia Britannica.  The value creation piece of Wikipedia was now undeniable.

Upon its switch to becoming a non-profit entity, the value capture for the organisation had to switch to become one of, “operates on whatever monies it receives from its annual fund drives”.   Wikipedia hosts po-ups on its site and emails any user with a registered email address seeking donations to pay for hosting the site and to keep the site running.  Indeed, Wales once stated that it costs about $42M per year to run Wikipedia.  The website has now started accepted Bitcoin donations as well through a partnership with Coinbase and raised $120,000 in the first week of accepting the currency.  Currently, the perceived value creation from the crowdsourcing for users of Wikipedia is high enough that members of the public have been willing to donate to keep the company afloat.  As the democratisation of information continues it will be interesting to see if the value creation of the website is still esteemed enough for the crowd to not only create it, but to also foot the bill of it.

Wikipedia Has Millions In The Bank – Why Beg For More?

Show me the Waze to go home