In a highly productive community of collaborative authorship, individuals voluntarily contribute to an open-content encyclopedia by adding new content and revising work submitted by others. 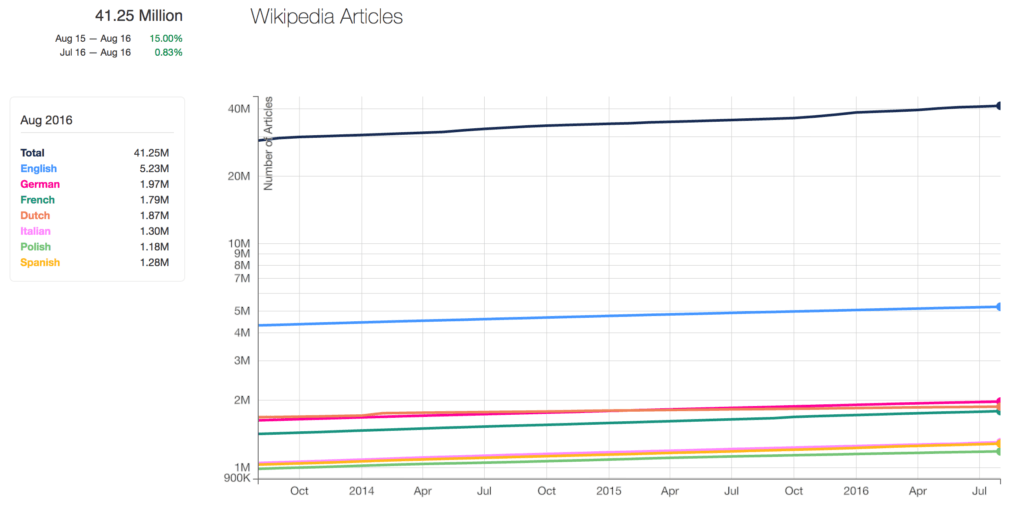 Individual contributors toWikipedia are known as ‘Wikipedians’. The English Wikipedia currently has 140,250 active editors (who have performed an edit in the last 30 days), 50% of whom spend at least one hour a day editing, and a fifth spend more than three hours a day[3]

What motivates people to contribute toWikipedia? For mostWikipedia contributors, it’s about the respect and recognition they receive in the community[4]. Unlike scientific publications, Wiki does not give direct credit to the authors. Further, articles are typically edited by multiple people multiple times. TheWikipedia authors community still recognize your contribution. Contributors also, at times, claim ownership by putting the link to theirWikipedia article on their pages, or including them in their ‘resume’ thereby helping themselves professionally.

For some, it’s a fun activity to share knowledge, learn about a topic in order to write aWikipedia page about it[5]. Putting information onWikipedia helps keep it organized and at one place, and thus contributes to the bigger cause of spreading the information in the world.

Reputed and credibleWikipedia editors become administrators and are able to freeze or delete entries, especially when edit wars erupt or inappropriate changes are applied. Administrators can be overruled by 36 stewards[6][7], who are ultimately responsible for resolving such matters. This hierarchical model becomes a necessary evil when anyone can freely share knowledge and ensures consistency and sanctity of information on Wikipedia.

Wikipedia is essentially an encyclopedia, where users come to acquire knowledge. MostWikipedia articles are written objectively, explaining major points of views, rather than advocating for them. Instead of publishing primary research, Wikipedia acts as a congregator and curator of knowledge from various sources, with due credits to the sources of the information. As shown in Figure 2, English Wiki alone had 7.8 billion[8] page views in August 2016, with roughly equal views on mobile and desktop.

As described above, the other set of community is Wikipedians, for whom contributing knowledge to the website is a matter of respect and recognition. With around 75,000 active editors, Wikipedia adds around 13,000 editors per month[8]. The community adds 11,000[1] articles to Wikipedia per day.

Wikipedia is owned and managed by Wikimedia Foundation, a non-profit charitable organization aimed at growth and distribution of free educational content free-of-charge. It does not charge users for contributing or viewing the content. Wikipedia’s annual operating expenses are estimated to be USD 63 million in FY2016-17, which are projected to be met through USD 57 million from online global fundraising campaigns and 6 million From Foundations[9]. This is why readers often see fundraising requests onWikipedia, as shown in Figure 6 [10].

As the number of Internet users grows, Wikipedia will have to manage the crowd (editors) and ensure the quality of the information being put onto the platform. Few argue that the popularity of Wikipedia is on a decline with the evolution of Google ranking algorithm, and the emergence of other crowd-sourced websites like Quora.

It is believed and argued that by keeping the content free, Wikipedia is passing billions of dollars in revenue annually. Based on the page view stats published byWikipedia, it could make $2.3B through display advertisements, affiliate links, lead generation, email monetization, franchising, and premium accounts[11]. But Wikipedia has chosen to not make itself an advertising platform by putting it in its founding pillars[12]. This, however, poses a big risk and a daunting task for Wikipedia to raise enough funds to be able to continue serving its purpose.

[Option 2] Glassdoor: Rant about your boss AND help the community

Equity investing for the masses: Is Indiegogo killing VCs?