Multi-homing is a threat to current network effects

Western Union operates in three segments, with most of its revenues (79%) coming from the C2C segment: [4] 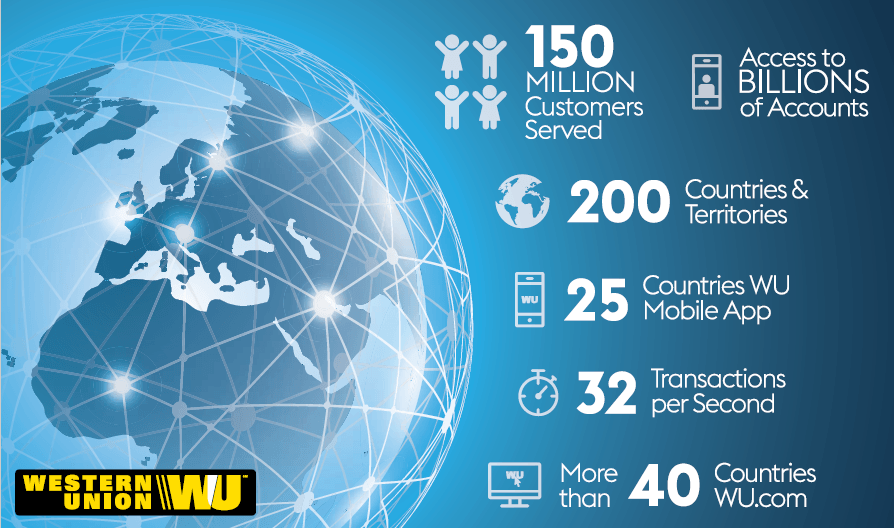 But new innovators are highlighting a problem for Western Union: multi-homing is high with money transfers. Companies like Venmo (PayPal) and Zelle (joint venture by several large U.S. banks) have deep pockets, but so far are mostly competing in domestic payment markets.  Meanwhile, innovators like Ant Financial (China) and M-Pesa (Kenya) are leveraging high mobile penetration rates in emerging markets, and are beginning to experiment with cross-border money transfers.

For decades, Western Union has defended its global position by investing in regulatory compliance. Governments pay close attention to cross-border money transfers, and heavily regulate these services to prevent fraud, tax evasion, and other criminal activities.  In 2017, Western Union invested $200 million and 20% of its workforce on compliance functions. [6]

However, regulators can’t keep pace with the wave of new blockchain applications. Blockchain is technology that uses an open, distributed ledger to permanently verify and record transactions between two parties. [7] While cryptocurrencies are an obvious threat to Western Union’s cross-border money transfers, Blockchain also can be used in a range of imaginative ways.  For example, De Beers is trying to create a diamond blockchain for registration and authentication, to prevent the spread of conflict diamonds.  Others see blockchain as an opportunity to help emerging governments become efficient and transparent, for example, by serving as the official land title registration. [8]

Western Union will likely face internal resistance from three sources.  First, Western Union’s third party agents may try to thwart any concerted moves to digital platforms, seeing such a move as a threat to existing commission revenues.  Second, Western Unions employees may not have the knowledge or training to effectively lead Western Union’s digital transformation, and may resist digital initiatives or operational changes. Finally, shareholders may punish Western Union for moving away from its higher margin core business to focus instead on simpler, lower-cost digital money transfers.

Reframe blockchain from a threat to an opportunity, by creating a new autonomous unit. [9] Western Union recently dipped its toes into blockchain. During its February 2018 earnings call, CEO Hikmet Ersek announced that Western Union “is experimenting with Ripple for settling transactions and for capital optimization,” and “is also testing Ripple’s native currency (XRP).” [10]

But Western Union is missing the true potential of blockchain for its business. Western Union is trying to use Blockchain as an incremental or modular innovation, when in fact it could be an architectural or radical innovation (see chart below) — introducing entirely new businesses that fit well into Western Union’s existing capabilities. [11] Western Union’s footprint of retail locations gives it a worldwide laboratory for experimenting with blockchain applications.  For example, helping African countries develop official land registers could eliminate a huge barrier to investment and capital inflows (e.g., by resolving uncertain and disputed land titles). Western Union could use existing retail outlets as nodes on a land register blockchain, which could bring in new sources of revenue to those retail stores. Navigating complex land title issues would also leverage Western Union’s existing capabilities of dealing with a range of government regulations.  This is just one example of how blockchain could be an opportunity for Western Union.

Continue to partner with popular digital platforms to provide legacy C2C money transfer services.  Western Union has recently partnered with other digital platforms to expand its digital offerings. For example, in 2016 Western Union integrated money transfer options with messanging apps WeChat and Viber, allowing users to send small amounts of money through the apps. Recipients can choose to pick up the sent money at a Western Union location, or send the money to a digital wallet or bank account. [12] These kind of digital initiatives are good pursuits for current operational leaders, since they represent incremental or modular innovations to Western Union’s existing product offerings. 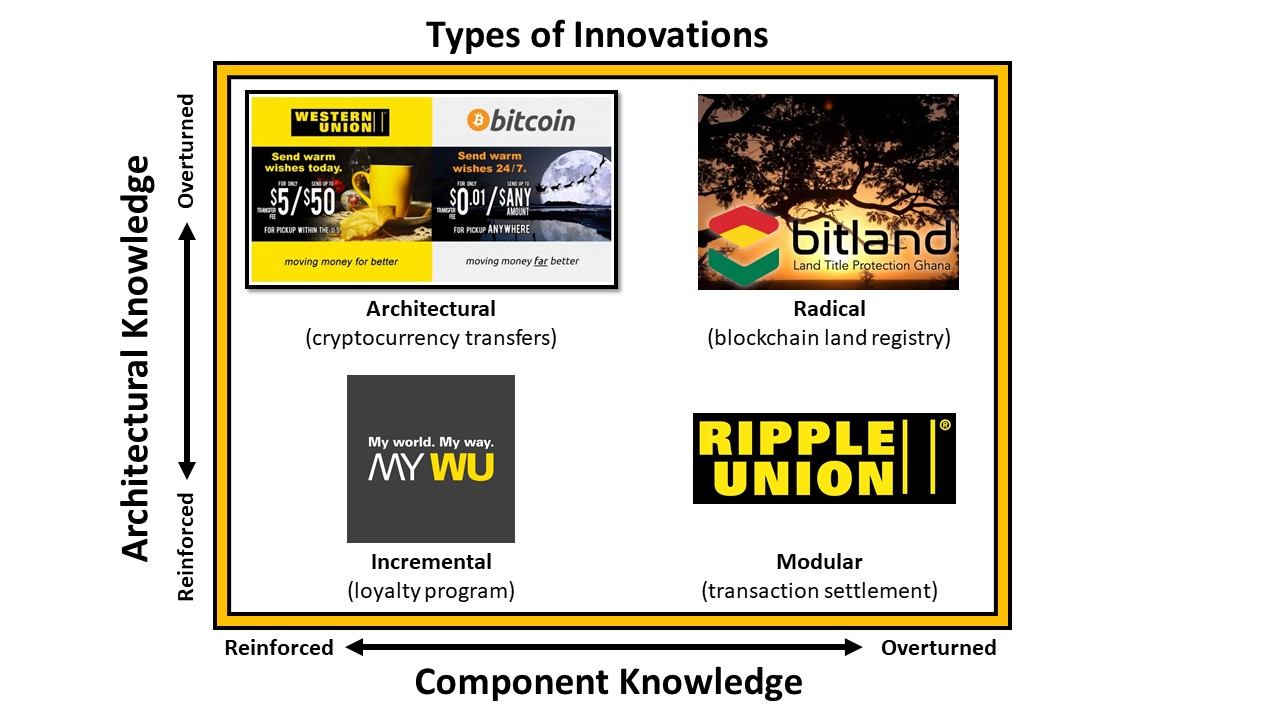 [1] The first transcontinental telegraph was sent on October 24, 1861, from the Chief Justice of California to President Abraham Lincoln.  Sydney Mahan, “The First Transcontinental Telegram was sent to DC 155 Years Ago,” Washingtonian.com, Oct. 25, 2016.

[7] For a helpful overview of how Blockchain is being used in emerging markets, see Vinay Gupta & Rob Knight, “How Blockchain Could Help Emerging Markets Leap Ahead,” Harvard Business Review, May 17, 2017.

[8] David Thomas, “Beyond the Hype: What Blockchain could mean for Africa,” African Business Magazine, Feb. 26, 2018.

[11] See generally Rebecca M. Henderson & Kim B. Clark, “Architectural Innovation: The Reconfiguration of Existing Product Technologies and the Failure of Established Firms,” Administrative Science Quarterly Vol. 35, No. 1 (March 1990), pp. 9-30 (describing four types of innovations — incremental, modular, architectural and radical — classified by their impact on a business’ core components and the relationships between those core components).

Upgrading the (Smart)House of Mouse for the Digital Age