VRTIFY is a music platform where users can create, upload, share, and consume VR music-related content. With more than 5,000 hours of live concerts, interviews, and video clips available, VRTIFY gives users the opportunity to immerse in music content and engage with artists through virtual and mixed reality. 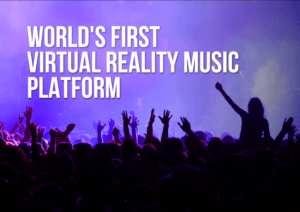 End users are both consumers and suppliers of all content on VRTIFY. There are currently three features through which consumers can interact with VRTIFY’s platform:

VR Videos – Consumers watch VR video clips uploaded by artists and other users. Imagine watching your favorite band perform at a concert thousands of miles away! Additionally, using mixed reality (better known as augmented reality), consumers can integrate VR clips with their surroundings, making it seem as if a concert is being played right in the living room.

By aggregating VR music and video clips onto one platform, VRTIFY creates value for consumers by not just enhancing people’s music-listening experiences but also making it convenient for consumers to search for VR music-related content. Another cornerstone to VRTIFY’s value creation model is that it’s extremely accessible! VRTIFY is available on every device and platform (VR headsets, MR Goggles, Web, Mobile, and Smart TVs) and can be used with all of the major digital music service providers — Spotify, Deezer and SoundCloud.[1]

Much like Spotify, VRTIFY has stated that it will operate a freemium business model. Thus, revenue will come in the form of advertisement fees, to support VRTIFY’s free-tier product, and Premium subscription fees, to support VRTIFY’s ad-free product. It is not yet known whether VRTIFY will offer any additional benefits to premium-tier customers, as the company only just released a beta version of its product last year. Also like Spotify, 70% of VRTIFY’s revenues are distributed to Artists and Content Owners ($0.026 per 1.000 views projected by 2019).[4]

Like all VR platforms, VRTIFY faces a classic chicken-and-egg problem. However, by curating its own content and offering a platform in which essentially anyone can submit a VR clip, it has already accumulated over 1,000 videos. In fact, I think VRTIFY is right to focus on the supply-side of the platform, at least for now. VR hardware is still being refined and adoption rates are low. Moreover, little-to-no VR music platforms currently exist. VRTIFY should partner with VR headset manufacturers and distributors by allowing them to use the VRTIFY brand. Hardware players will benefit from the ability to offer one more feature to attract end-users to purchase their product and VRTIFY will benefit from the marketing.

Hence, my advice to VRTIFY is simple: large companies such as Google, Samsung, and Facebook have deep pockets and will already be spending A LOT on marketing campaigns to acquire customers – let them. Focus on creating the best VR music platform technology and building a large library of excellent VR clips so that HMDs will want to do your marketing for you.

Additional recommendations are as follows: