The app, Vigilante, was created by Andrew Frame who sought to raise crime awareness in New York City by informing users of dangerous areas to avoid. The App obtains information from two main sources – 1) curated 911 calls and public police database, and 2) user updates and uploads of live videos from the crime scene, which could also be shared on social media. The users could search incidents – labeled by the type of crime – that occurred in their area through a map interface and comment on other users’ videos and reports. By leveraging the crowd, the App aimed to offer real time, hyperlocal crime information that had not yet been reported to the local police.[i] 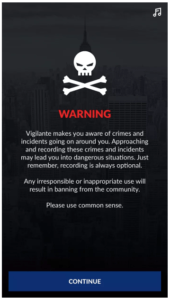 When Vigilante was first launched in October 2016, the app’s blog post quoted a former police officer, who said that “average and ordinary citizens should approach the problem of crime as a group.”[ii] Vigilante also promoted a dramatized video of a group of average citizens that used the Vigilante app to stop a violent assault from happening. Consequently, the launch faced serious backlash from NYPD, and was shortly removed from Apple’s app store a week after the launch due to concerns around user safety[iii]. 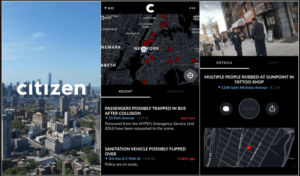 Months later, the crime awareness app relaunched under the new name “Citizen”, claiming that it has deemphasized potential involvement from users by making the “report incident” button less visible in the app. The app now warns users to “never approach a crime scene, interfere with an incident, or get in the way of police.”[iv] The app has now expanded to San Francisco, and has recorded a number of positive instances where the crowdsourced information has actually helped the police department. However, major concerns still remain:

While Citizen has certainly assisted the police and has helped users avoid danger through its increased transparency on the platform, the crowdsourcing model, if left unchecked, could also yield serious consequences. In order for this app to succeed, Citizen needs to put in place filters for its user-posted content. Photos that contain identifiable faces of individuals should be handed directly to the police and omitted from the social platform. Personal report forms should focus on objective descriptors such as what the suspect is wearing, height, gender, license places, his or her actions, etc. Citizen should also partner with nonprofit organizations like WITNESS, which trains people on how to ethically use video to expose human rights violations, and create mandatory training videos for its users. And finally, Citizen should continue to work with the city government to gather surveillance data captured in public areas to cross-check users’ inputs. Only incidents that pose a severe threat and with the highest likelihood of reoccurrence should be posted on the website.