Traditional mail services have been bringing people together for centuries. Moreover, during the last decades postal services increased their activity tremendously led by economic growth, expansion of business reach and geographical mobility, and the development of the transportation industry with subsequent reduction in shipping costs. Frontiers fell not only within states but internationally as communications increased and first class mail (letters, documents and other light packages) reached every corner of the earth. As a consequence, the pieces of first class mail handled by USPS between 1930 and 2000 grew from 16.9 billion to 103.7 billion, as we can see in the following graph.

Notwithstanding, volume stagnated thereafter and started declining early in the 21st century. The rising of the internet totally transformed communications worldwide, providing superior speed and accessibility that outplaced traditional communication services. While buying and pasting stamps was once a daily activity for millions of people around the world, it became almost a hobby for antique collectors and nostalgic dreamers.

Continuously people increased the amount of time spent online and electronic transactions filled a broad spectrum. Mail payments started declining early in the 2000s decade being an example of the hundreds of habits people would start dropping.

Percentage of Household Bill Payments Made by Mail and Electronically 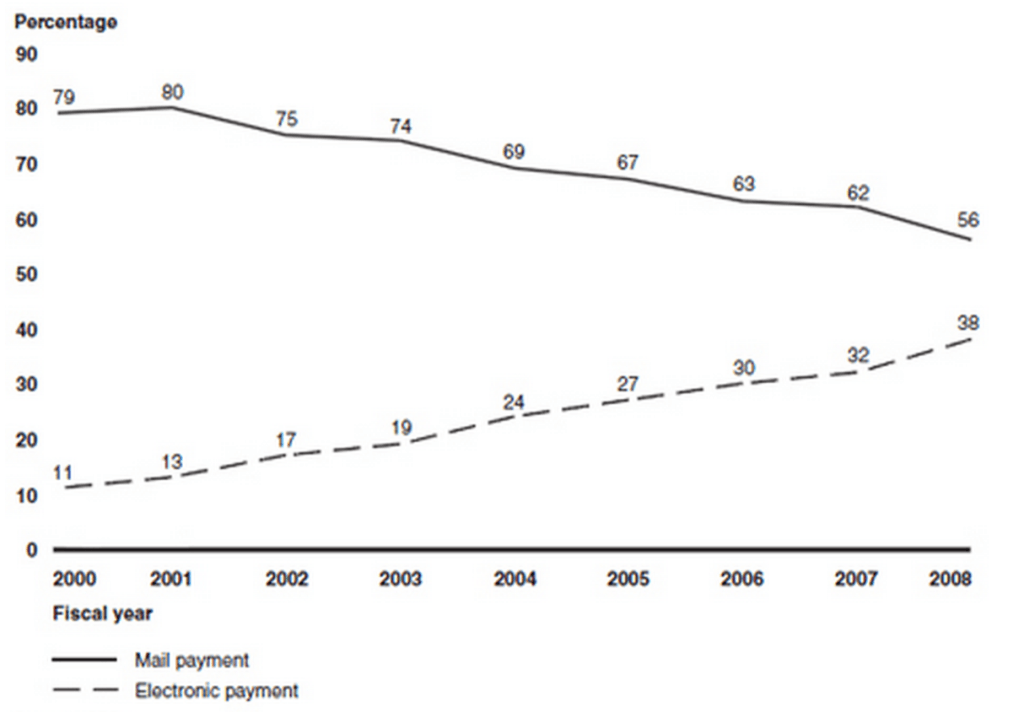 In this context, USPS was a mere witness of how the times seemed to be pushing it towards a cliff. Despite having a legal monopoly over first class letters in the United States, the company didn’t understand that the new era required a total transformation of its business model and that complementary services such as online tracking were not only becoming a commodity but a reflection of sophisticated logistic systems that would become the base for competing in the new era. Moreover, the digital technologies disrupted also the industries of its clients. Viral marketing for example became one of the biggest threats to USPS as thousands of corporate clients moved from physical to web distribution channels for their commercial activity. Together, text messaging, email marketing and social media kept gaining momentum, challenging postal services to adapt or fail.

While its competitors understood that new trends would require a shift in the scope of their operations, USPS did not have the ability to rethink itself and its organizational structure. Of course, its public nature made it even more difficult. With rigid compensation policies and close watch of the public eye on job security, it became practically impossible to make any changes to its internal organization. With first class mail reaching almost 70% of total revenues at their pick, and labor costs accounting for 80% of total expenses, net income started sinking, accumulating more than $41 billion of net losses by 2012 and driving the company into a historical crisis.

With volume declining steadily, increased price elasticity and lower prices forced by growing alternatives, labor costs accounting for 80% of total expenses and a rigid fixed cost base, USPS will continue to be under pressure in the upcoming years.

But although future seems at least blurry, there could be another chance for the old postal service. Another habit change, now caused by the impact of e-commerce might help USPS to leave the ICU. Paradoxically, after Amazon announced a deal through which USPS would become Amazon’s default delivery system, there could be a chance that the same force that once pushed it out off the road, could extend a hand to help. But it will take more than just trying to ride the wave. This time USPS will have to solve its structural problems and at least try to meet the expectations of its new prime customer. And this will also take an important political effort.

Kodak: The fall of a giant

Student comments on USPS: Nothing more than a stamp designer?