While in terms of market offering there are countless companies offering personal loans to people with short credit histories, like payday companies such as Amscot or Cash Store, the overall consumer experience has been plagued by manual processes to pay back the loans and in some cases, “shark-like” behaviors from lenders to capture loan payments. Due to the limited number of lenders for people without credit histories, consumers tend to negotiate less on the terms and conditions of their loans and accept higher interest rates to compensate for their perceived “low creditworthiness”.  Noticing this customer pain point, Upstart and wave of new startups have used the power of digital platforms to disrupt the market and create new offerings. By understanding how Upstart creates value for its users through AI, we will delve into potential new markets where the startup could venture, as well as the potential challenges that it would face as a disruptor.

Upstart is a startup founded by ex-Googlers that uses the power of AI to provide personal loans to users with short credit histories but regular income and high earning potential. What differentiates this lender from the rest is its ability to use machine learning in the process of underwriting the loans, which is the process through with new users get accepted or denied access to a personal loan.  By relying on a larger set of user data points that include non-traditional variables like someone’s GPA in college or the name of the company where a new applicant works, Upstart is able to build a comprehensive profile for risk assessment[1]. As showcased in the graph below, another key to this formula is the company’s reliance on behavioral data that constructs a better assessment of risk, rather than the traditional FICO scores that measure static variables,  such as the number of accounts a user has or the average length history of their overall. Despite the lower average weighted scores from Upstart borrowers, even at the lowest end of the spectrum of 600-670 scores, the estimated average annual loss is just under 10% on average, compared to their competitors who face higher annual loss rates higher than 15% on average[2]. 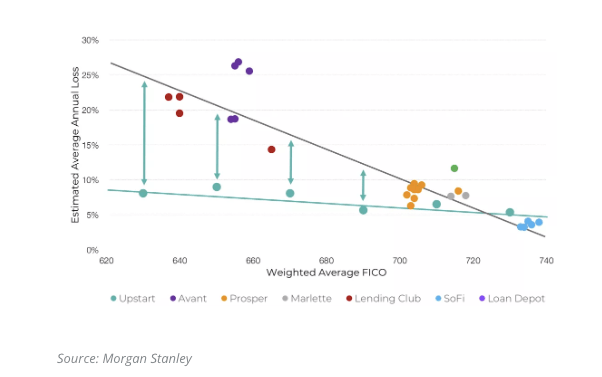 The theory behind this trend is that most personal lenders undervalue new applicants with low creditworthiness under standard variables, and fail to understand the economic potential of their users. Not only that, but FICO scores have been heavily scrutinized for their strong correlations to extrinsic variables such as the applicant’s race or zip code, which many deem to be a cause of inherent bias in the provision of loans[3]. 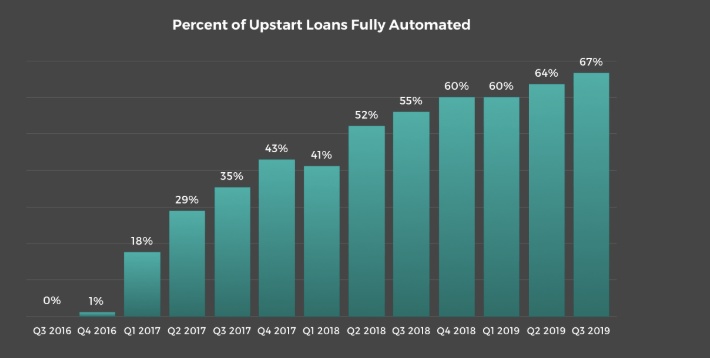 Instead of relying on manual processes that may add biased opinions during risk assessment, the company has automated the process of loan approvals. As of April 2019, Upstart has provisioned over $5B in platform originations, of which 67% were fully automated through the ML underwriting process.  As the trend progresses towards a theoretical maximum of 99% of automated approvals, one could expect that the ML algorithm would improve over time as it enters new markets and assesses new types of risk profiles[4].

Future challenges and opportunities of scaling the startup

As ML technologies disrupt traditional markets, regulatory efforts will likely grow as AI-driven lending practices gain visibility. This must be accounted for in the growth strategies of firms in this space. One particular case would be the compliance challenge that traditional firms already face to prove their elimination of bias in the approval process, which is enforced by the Consumer Financial Protection Bureau (CFPB). Despite the company’s ability to obtain a No Action Letter, which is a temporary safeguard that protects “innovative technologies that may bring significant consumer benefit”, this sort of approval is limited to US Jurisdictions, and similar requests would need to be created if the company attempts to expand globally. Also, since No Action Letters are not laws, they can be overturned under certain circumstances and political environments that would be outside Upstart’s immediate contingency plan. As companies face higher scrutiny in a world post-Cambridge Analytica scandals and an increase in data privacy issues, it would is imperative for startups to measure the uncertainty of future conditions as they face new legislative bodies in markets that may not be as friendly to their new technologies[6].

Planning for the future by acting, rather than reacting, to new trends

In a world where millennials continue to be a growing force in the economy, holding over $1.4 trillion in added value, a strategic priority of any fin-tech startup should be to increase their access to new loans and capture the growth of their consumer lifetime value[7]. But, this should include millennials and early professionals from all walks of life, especially those who may have faced bias in the traditional market of personal loans. While machine learning algorithms have been hailed as non-biased ways to make decisions, a new wave of research has shown that they can actually perpetuate similar bias towards specific groups[8]. As such, I would recommend Upstart to look at the growing markets of US Latino and African-American millennials, who represent over 50% of their individual demographic groups, as key targets of their expansion strategy[9].  If it is in their mission to open the floodgates of opportunity to new applicants, then they should be able to devise solutions to improve their ML algorithm and further eliminate the bias already present in the loan provision process and capture the growth of the nonconsumption market. In sum, if the theory of disruption holds any value, it is precisely in its application to growing markets that were previously relegated and to finally realize the hidden gains that technology can express.