Twitter is a real-time information network allowing users to broadcast content to their followers in 140 characters or less. While initially used to describe status updates when first launched (e.g., what you ate for breakfast), Twitter is now much more widely used to pass information, thoughts, ideas, and news updates quickly and concisely. The platform allows users to link to relevant websites, videos and pictures to convey larger messages beyond the 140 characters, and conversations can be initiated and continued between users via relevant user tagging and retweets.

Twitter, like other social networks and messaging apps, demonstrates direct network effects; each incremental user adds additional value to the platform by creating additional user follower connections. And similar to other social networks, Twitter lends itself to indirect network effects by creating a platform on which advertisers can create content and target to Twitter users, utilizing the same content types Twitter allows its users to access today – links, videos, and pictures.

Twitter’s growth in active users has slowed much more quickly than markets were expecting, leveling to about 300M MAUs in the most recent quarterly earnings. While it normal for growth to slow over time simply given a larger user base, Twitter was expected t 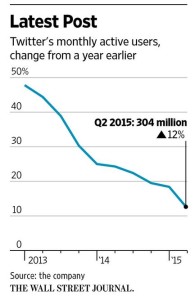 o reach near Facebook levels when it IPO’d, and its public positioning has placed more pressure on the platform’s ability to scale. Reports suggest that Twitter has already had 1 billion users try and subsequently leave the platform.

Several factors contribute to Twitter’s slowing user growth. For one, Twitter is a relatively confusing service; features are less intuitive than Facebook, and it becomes more difficult to understand who you should follow since there is less direct correlation with a user’s immediate social network. Rather, users follow individuals they are interested in, which could be for a variety of reasons beyond social connections. Second, Twitter messaging between users has long been public tweeting back and forth. Twitter only released private direct messaging in early 2015, which has existed on Facebook for years. And finally, while a social graph can be developed quickly and is based on a user’s daily interactions with friends, family, and acquaintances, an interest graph of following people and trends outside of your daily interactions takes much more time to develop properly, and may slow user uptake of Twitter’s platform.

While 300M users is still a very sizable network, the problem that Twitter is facing is its ability to use indirect network effects to properly monetize its platform. Like other social networks, Twitter has turned to advertisers hoping to use promoted tweets as a m 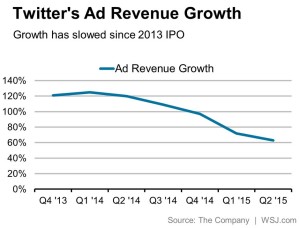 eans to reaching users. But with a limited user base, there is a limit to how many dollars each user can provide before upsetting them–or worse, losing them–because of too many ads cluttering their feed.

Moreover, advertisers are attracted to scale, and Twitter’s failure to grow significantly leaves it susceptible to other social networks that could take its share of the advertising pie. For example, services like Snapchat and Pinterest – both still private – are growing quickly, and Instagram recently surpassed 400M MAUs. These other services also offer native advertising platforms which may be more consumer-friendly relative to Twitter’s 140 character tweet.

Other platforms may beat Twitter’s offerings

Finally, Twitter’s product stagnation has limited innovation that could create new value for its users and advertisers alike. The product remains almost unchanged from its founding, and still sports the reverse chronological timeline. This is in contrast to Facebook which has altered its News Feed and product to juice user growth and value around its ecosystem (e.g., splitting out Messenger despite user complaints; altering News Feed to show content algorithmically – both of these benefit advertisers at scale in the long run). Twitter has been held hostage by its power users to keep the reverse chronological, unfiltered timeline, and as a result, it fails to grow and create opportunities for advertisers to reach its audience more effectively.

4 thoughts on “Twitter: A network potentially losing its effects”