Have you ever remit your money internationally? Did you know how much it cost to remit your dollar and convert to some other currency? 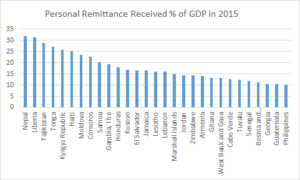 The size of money transfer industry is expected to reach around $600bn in 2017. In the U.S. alone, $54bn was transmitted abroad in 2014. According to the World Bank, there are 29 countries of which personal remittance received amount consists more than 10% of GDP.

Apparently, the money remittance makes huge impact to business and people, especially who need to work overseas and remit their earning to support their families in the homelands. However, the industry is still very inefficient and dominated by incumbent players: commercial banks. Global average total cost of sending remittance reduced from 8.93% in 2013 to 7.52% in 2015. Top US banks wire transfer costs range from $15 to $60. Considering the personal remittance amount usually stays in three digit amount, let’s say $500, it would cost 3% and up to 12%. Now you know banks takes huge cut from people who need to support their families with no or very less effort.

Transferwise is the disruptive player in this money transfer market. Founded by the founding member of Skype, the company provides money remittance service with only 0.5% fee.

Transferwise is like a two-sided marketplace, connecting people by matching up payments with those going the opposite direction. For example, suppose I want to pay my rent bill in the US with US dollar but I do not want to use US dollar and instead I would like to pay with Japanese Yen, Transferwise connects my transactions with someone who has US dollar but need Japanese Yen to conduct some payment. Transferwise enables me to pay my rent amount in Japanese Yen and the counterparty can use US dollar to conduct equivalent Japanese Yen equivalent, eliminating international money transfer, bypassing banks, and significantly lowering fees, up to 8 times according to Tranferwise. In addition, it is since the exchange rate is marked-to-market, it eliminates the speculation such as Bitcoin, and it provides safer and conservative money transfer compared to other disruptive service in the market.

In order to make many kinds of transaction feasible, Transferwise needs to build diverse pools of the currencies and users.  Today, Transferwise has over 1mn users and allows them to send money from more than 35 countries and receive money in 50 countries. Its monthly transaction. With the competitive pricing among peers, Transferwise gains customers from incumbent banks and rapidly growing its customer base. 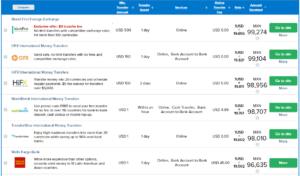 How do various factors such as local/global network effects and multihoming affect competitive dynamics in platform markets?

Transferwise is a very customer-centric company. Perhaps it is because the founders has developed its business model to solve their personal frustration and struggle about money transfer. It’s simple and intuitive user interface and mobile application, and its obsession about transparency, such as full disclosure of cost and use of flat inter-bank rate, help building trust and loyalty which resulted obtaining more than 35,000 happy review.

How to use Transferwise

Since the money transfer cost is significant, especially for those who live abroad to find job and support their families in their homeland, the cost benefit of Transferwise is enormous. Moreover, it is often the case that those people form own community and the power of word-of-mouth is really strong in the target user base, which could spread globally as the senders and recipients are across countries. Hence, the local and global network effect is strong in the market and its superior price formula would block users from multi-homing.

Transferwise offers great values to the users and but it is not free from challenges. Although Transferwise has its compliance team and registered in the UK Financial Service Register, following anti money laundering and fraud compliance laws in every country they operate in, it is a young company just founded in 2011 and has shorter operating history and lean operation. If they fail to manage and prevent criminal acts, the regulatory body may impose sanction or suspend the business, depends on the level of importance.