Jinri Toutiao (means today’s headlines), a tech unicorn in China, is a news and information content platform powered by Artificial Intelligence. The company is China’s largest mobile platform of content creation, aggregation and distribution, with 120 million daily active users as of Sep 2017. Founded in 2012, the company now values at $22billion.

Toutiao doesn’t charge fees to consumers and earns revenue solely from advertising. Because of its AI capability, it can help advertisers target their consumers more efficiently and precisely, and thus can charge higher rates than competitors. For users, seeing advertisement they might be interested in will make them less annoyed, and Toutiao is able to include more advertisements to increase its revenue. 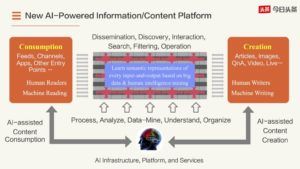 Key success factor of a quick Scale Up

“Toutiao is one of the fastest growing apps in terms of revenue in the history of the internet.” It reached large scale in a short time frame without any resource to leverage as a start-up (the company doesn’t have any tie with tech giants, like Alibaba, Tencent, Baidu). I think its key success factors include strong network effect, learning effect, and stickiness.

The future, from one platform to many platforms…

With a proved success in news platform, Toutiao is now expanding to other platforms to build up a chain of entertainment content, from image, video, live to Q&A.  The company has built watermelon video (short-video platform) and Wukong (Q&A community like Quora), and acquired companies like Flipagram, Musical.ly, and Faceu.