While the streaming wars of online video have become a widely discussed topic, music streaming is not far behind. Spotify filed for an IPO last week, and analysts report that the offering will give the company a $23BN valuation on the back of 71 million paying subscribers and more than 159 million MAUs.1 Contrast this with competitor Tidal, which as of December, was reported be burning though cash and losing users, with enough working capital to last only six months.2 Why has Tidal, which had the benefit of a famous owner in Jay-Z, faired so much poorly than its competitors?

Tidal was initially launched by Aspiro in 2014, but was quickly purchased by Jay-Z in January 2015 for $56M.3 Two months later, Jay-Z re-launched the service with a huge marketing and PR push. With Spotify and Pandora already in the market, Tidal needed to distinguish itself from the competition to gain any traction. The platform wanted to distinguish itself on three dimensions: 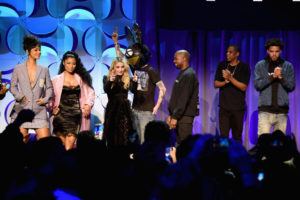 Photo from the Tidal launch event.

The immediate aftermath of the announcement seemed to prove the re-launch a success. The platform stated that it gained 100K subscribers just from the announcement of the artist co-owner list and catapulted to the Top 20 of the U.S. iPhone Apps chart.4 However, the success was extremely short-lived, and the platform quickly fell out of the top 700 apps within two weeks.

Looking at how Tidal wanted to create value, it becomes clear why the platform struggled. It hoped that its artist-first ownership and royalty model (it reported to pay the highest royalties of any music streaming platform), was meant to be an attraction to gaining top talent that would then entice user subscription. There are two problems with this. First, the cost structure of this model is not scalable. Spotfiy, which has a much larger user base, pays artists less than Tidal and has never been able to make a profit. This is due to the high fixed cost nature of the business, meaning scale is the only way to reach profitability. As a new, and late entrant, scale becomes very difficult to achieve for Tidal, made even more daunting by its smaller geographic footprint than its rivals.

Tidal also hoped that its exclusive content would attract users. Unfortunately, this missed the point that users multi-home streaming services, especially when ones are available for free, and are happy to wait to listen. Users are not beholden to Tidal for songs, and they can still listen to their favorite artists on other platforms, or, find a way to illegally download the song elsewhere. And, as we have seen as of late, artists rarely stay on one service exclusively for long, knowing that the small financial gains per stream dictate a strategy of having your music available everywhere. While some users may pay for the earliest access, most will not.

In addition, Higher quality audio is not that great of a selling point. Most users do not care about it. Those that do might not have the appropriate headphones that can actually capture the higher quality audio. And, at $19.99 a month, the price point for better audio is prohibitively high, where users have been conditioned to be able to listen to music for free, or at most, $9.99 a month.5

Tidal’s biggest mistake appears to be that they never understood how hard it was given that they were the fourth entrant into the space. Instead of trying to undercut its competitors by price or content availability, the platform went in the opposite direction, making its service the most expensive, with the least amount of content, hoping that its message would bring users in. Unfortunately, users do not have an emotional connection to their streaming service. They just want the cheapest option that has most of the music they want to listen to. Apple may have gotten away with this strategy because it built its streaming service into the rest of its product ecosystem. Tidal, however, only had its own service to stand on.

Tidal’s subscription numbers have been disputed, but estimates put it between 1 and 3 million, much further behind even Apple Music, which has 30 million.6 With no turnaround in sight, or change in strategic direction, some analysts speculate that Tidal will eventually sell itself to one of its rivals, hoping to buy their subscribers and exclusive content on the cheap.

ClassPass: Navigating the Challenges of Building a Sustainable Marketplace Model

Amazon Handmade: Not All Networks Can Be Stitched Together

Student comments on Tidal: How to Lose the Music Streaming War