To Orbital Insight, data is the oil, literarily.

The Palo Alto, California-based geoanalytics startup, has figured out a way to estimate the real-time supply of the world’s oil, the golden data in the commodity trading.  It provides trading tips to fund managers who used to bet on delayed and inaccurate government surveys of oil inventory.

Founded four years ago, Orbital Insight started with analyzing massive satellite images of oil tanks with floating lids around the world.  As a tank is filled, its lid rises, while it is emptied, the lid sinks. The sun casts crescent moon-like shadows on the inside of the tank. By detecting and calculating the changes of those shadows, the company can estimate how much oil storage is in 20,000 tanks it monitors around the world.

Orbital Insight sells its data or “transparency” as it self-claimed to hedge funds and energy companies amid the increasing uncertainty in the world’s oil markets. Its daily-updated World Oil Storage Index is also carried on the Bloomberg terminal.

The company finds itself create more value in the emerging markets where oil reserve data is less available or reliable. Last year it disclosed that China might have much more oil reserves than the world’s second-largest economy declares. Its satellite image analysis-based estimates also exceeded the other projections including those from Energy Aspects Ltd. 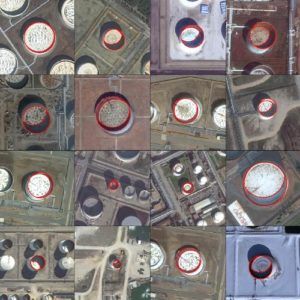 Orbital doesn’t just measure oil tank shadows. It basically fact checks everything from the forest coverage to crop yields by analyzing satellite images. It is even making a foray into the retail traffic prediction business. It found that the cars parked outside J.C. Penny’s outdoor parking lots fell 5 percent in the fourth quarter in 2016 from a year ago. By counting the parking vehicles for a particular chain, Orbital Insight can estimate the retailer’s sales before the official data announcement.

Clearly, Orbital Insight is benefiting from the rise of the satellites that are powered by smartphone technology, known as cheaper satellites. Governments and other companies have tried to make sense of the satellite images for years, but the research is very expesnsive. Orbital Insight can afford to purchase the images from its partners, but it doesn’t own any satellites. While it’s enjoying the first-mover advantage, other companies are also catching up. Especially when the satellite owners, such as DigitalGlobe and Airbus, figure out the algorithm, they could just bypass Orbital Insight and sell the data analysis to clients directly. It’s probably only a matter of time.

Data accuracy is another pain point of Orbital Insight as it grows. Satellite images can only cover outdoor areas at a given moment by today’s technology. What they can’t detect are the indoor product storage or activities. The smaller data pool can easily skew the analysis, let alone other factors that snapshot images can’t capture. As more shoppers go online, the number of cars in a retailer’s parking lots probably won’t tell much more about its financial health as before.

There’s definitely a lot to do for the company founder, a former NASA scientist James Crawford and his team. The good news is that the Silicon Valley Darling is backed by some deep-pocket investors including Sequoia Capital, Bloomberg Beta and Lux Capital, allowing it to take on more adventures.

The Business of Hillary vs. Trump