The more traditional companies in the media industry have notoriously suffered from the rise of digital media and content. Information is increasingly accessible, timely and most importantly – FREE. As a result, large and long-standing printed newspapers are losing readers and revenue from decreased circulation. Determined to stay alive in this new environment where consumer demand and expectations have changed, only those willing to adapt and fight will survive.

The Guardian newspaper is a prime example of a company who has embraced the digital revolution, and in my opinion is one of the winners of the traditional media giants. To ensure their newspaper stayed relevant in the digital age, UK’s The Guardian adopted a more open style of reporting – coining the phrase ‘Open Journalism’. For them, the future of journalism is where digital, print, and social media sources are all intertwined to create “the whole picture,” resulting in better content. Open Journalism is only possible because the evolving digital landscape and increased mobile Internet access, where everyone can be an on-the-scene reporter. Former Editor-in-Chief, Alan Rusbridger, stated that a newspaper’s new role is one of a curator or moderator of information, shared across multiple platforms. He believes that journalists are not the only experts, and more data leads to better informed stories. This is shift from a traditional media relationship of broadcasting news from one central site, out to the mass population. The Guardian encourages its readers to get involved by: 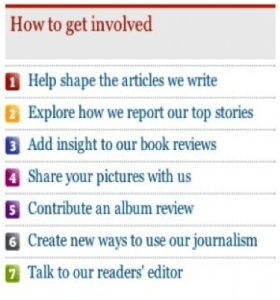 The Guardian launched this new ‘Open Journalism’ approach using an award winning advertisement featuring a modern retelling of the classic story of ‘The Three Little Pigs.’ Through discussion and collaboration between journalists and their readers, the true story is revealed. Have a look for yourself:

The Guardian themselves admit that if they weren’t digitally open they would be falling behind their rivals. Putting readers at the heart of their content helps them to break the biggest stories – proven through them winning the editorial Pulitzer Prize for their unrivaled coverage of the Edward Snowden NSA leaks. Additional benefits of moving to digital and being open is increased readership engagement and article archives. Articles are stored online, and through the newly opened 2-way conversation, journalists can ask readers what type of topics do they want to hear more about – tailoring content to their readers demands.

The outcome has been great, with Business Insider ranking The Guardian as number 1 in terms of reputation across all UK newspapers, stating that it is in ‘Fantastic Health’ due to its adoption of digital. The Guardian has been called a pioneer in online media, launching its first mobile app in 2009, becoming one of the first publishers to launch on Google Glass, and opening an in-house digital studio which relies on continuous improvement through test and learn.

Being a first-mover in digital has paid dividends. From a financial perspective, The Guardian’s digital revenues grew by 24% to £69.5 million over 12 months, ending March 2014 – the fastest growing in the industry. It has also seen increased revenues via subscriptions in the form of its Membership Scheme, where it is asking readers to pay anything between £15 to £60 a month for access to live events and entry into a new Guardian Space venue. On top of this, Print revenues remained flat in the 12 months to the end of March 2014 — a strong performance in a market suffering terminal declines.  Proof, that The Guardian thinks this winning ‘Open Journalism’  approach will continue to work globally, the company has recently opened up offices in the US and Australia. Who know what is next for this innovative media company.