With $400 million in revenue in Q2 of 2015, Fitbit turned a $130 million profit for 2014. Fitbit can attribute much of its present success to the strong direct network effects it established early on. The technology offered consumers individual fitness data that they could upload onto a website that would display their information in the form of personalized trends and statistics. Not only could users use this information to make real lifestyle changes, they could also connect directly to friends – a feature that many found useful in fostering competition and accountability. Fitbit quickly became a platform by which users (both friends and strangers) could support, motivate, or compete with one another – all for the purpose of achieving health and fitness goals.

Competition within the wearable category has been intensifying, however. Fitbit has proven that it is able to outshine several competitors, such as Xiaomi and Jawbone, but what about the smart-watch revolution that is currently unfolding before us? Right now, Fitbit still retains the largest slice of the pie at 24.3% market share. Smart watches, such as the Apple Watch, are expected to outcompete Fitbit by 2018. This begs the question, is the Fitbit fad nearing its end?

If it continues to rely on direct network effects to propel its user base, then the answer to that question is likely “yes”. However, Fitbit is already building up its base of complements, and rumors regarding its future plans are already circulating.   If Fitbit is able to successfully leverage indirect network effects, then only does it stand a chance against the Apple and Google products. One of Fibit’s major assets – in addition to its widespread user base – is its enormous repository of data. With open APIs, Fitbit is able to sync with other platforms, such as My Fitness Pal, thus providing users with an enhanced experience. 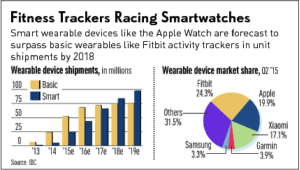 Such indirect effects are not enough, however. Fitbit’s survival depends on its ability to find strong partners with tailored expertise. For example, if Fitbit can partner with a data analytics giant, such as IBM Watson, the enormous pool of data (that is of little practical use currently) can be translated into useful and monetizable information.   This can provide a gateway to the healthcare space; the field is waiting to jump on the wearable wave, provided that useful and practical information can be gleaned from the devices.   With the ability to translate this data into something applicable and practical to healthcare providers, Fitbit can further strengthen its indirect network through relationships with insurance companies, hospital networks, and providers.

If Fitbit is slow to jump on these opportunities, it can expect to be made obsolete by the smart watch category. It currently prides itself on being focused on tasks solely related to fitness and health, whereas products like the Apple Watch offer a wide variety of functionality. But, it is not unreasonable to assume that these smart watches will be able to everything Fitbit claims to do, and to do it better. If- or perhaps when – this happens, the Fitbit fad will officially be over.

Student comments on The Fitbit Fad?