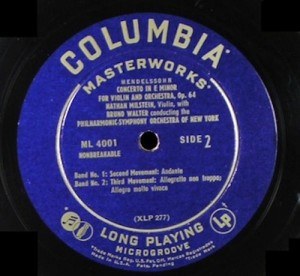 The LP (Long Play), or 33 1⁄3 rpm microgroove vinyl record, is a format for phonograph records, an analog sound storage medium. Introduced by Columbia Records in 1948, it was soon adopted as a new standard by the entire record industry. It has remained the standard format for vinyl albums[1].

Originally, because of its extended continuous play, LPs were best suited for classical music and Broadway musicals. However, during the mid-1960’s, the popularity of the LPs gave birth to the Golden Album Era. Musicians like The Beattles, The Beach Boys and others took advantage of the longer playing time to make fully-fleshed coherent albums. Frank Zappa, from Mothers of Invention has said about his Freak Out! Album: “It wasn’t as if we had a hit single and we needed to build some filler around it. Each tune had a function.”[2]

Additionally, the success of the vinyl LP encouraged small indie labels to record unusual fresh new repertoire. The LP, combined with high quality microphones and truly portable tape recorders meant you didn’t need a studio to make sonically competitive recordings. You could record high quality sound from the comfort of your home (or garage). The indies were experimental, vulnerable and ambitious. They dug deeply into jazz, folk, spoken word and chamber music offering more choices, better recorded, to a wider range of tastes and interests.[3]

Analog tape came to market in the 1950s but because of their inferior sound and the high cost of prerecorded tape, they didn’t dethrone the LP. It wasn’t until the first compact disc (CD) came into market in 1983 that the music industry would really take a turn. The CD was the first all-digital disc were physical properties of the original analog sound was converted into a string of 1s and 0s.

The CD was also an easy-replicable, easy-compressible copy of the original. Without the need of a master copy, the digitalization of music gave rise to the highly-compressed MP3s and the Napster’s of our time. The songs could be torn apart from the album and made to a 10th of their original size, compromising sound but nevertheless giving birth to the rise of MP3 players, iPods and streaming music services.

The wide digitalization of the industry has allowed for the quick diffusion of pop hits and the mass-production of music. Some of the most popular YouTube videos are now being watched over a billion times. This would have never been possible without the digitalization of music. It hasn’t come at a price though, the demise of the LP and the end of the Album Era has spurred the rise of 1-hit wonders. Good-looking slightly-talented hungry YouTube tweens stars are now topping our charts. So, who are the real losers of the digitalization of music? Is it LPs or is it music lovers all around the world?