Telemedicine is not a new idea. Since the birth of video-calling, experts thought that telemedicine will revolutionize the industry. Analysts bullishly have suggested that the market could be worth $4.5B by 2018 (IHS, 2014). Back in 2002, a small start-up called “Teladoc” saw this opportunity .

Fast forward to this summer, the summer of 2015, and Teladoc had grown to be the biggest player in the telemedicine industry. With 8.1 million members on its books, $44M in revenue in 2014, and a 119% growth versus the prior year, no one could argue that Teladoc was the company to beat in this space. Then, on July 1st 2015, The company IPO’d with enterprise value of $620 million. Has the revolution really finally happened and has Teledoc won? Far from it in my opinion.

Before tackling that questions, lets first think through why telemedicine has been highlighted as a potential game changing digital innovation. In theory the model is beautiful, as all current stakeholders in the system benefit due to the increase efficiencies:

Value creation is not where I think Teladoc will lose the battle in this industry, but rather through their plan for monetization. Teladoc decided from the start to go for a subscription-based model, selling directly to the payers. This seems like a great business model. Companies would pay an annual subscription per member to be covered. In one contract, thousands and thousands of patients can be brought on board and instantly monetized! Enterprise clients tend to renew contracts higher than consumers, so churn was expected to be low.

However, I believe that this initial choice of business model will ultimately lead to the downfall of Teladoc, thanks to one simple metric – utilization. In order for this model to work successfully, the payer needs to see value. If they are paying for this service at a fixed rate, and no-one is using the service, the person writing the check is likely to feel ripped off. From looking at the data, utilization has been terrible – <5% of people are using the service in the companies who have signed up. 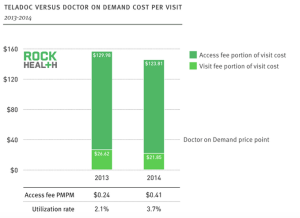 With such a low utilization rate, the payers are not seeing the value promised. But why is the utilization rate low? One large reason is awareness. Patients in the signed up companies are either not aware of the program, or if they are aware, do not see the value in using this service vs. visiting the doctor (“I need to see a real doctor, not just one a screen”). Awareness will only increase through spending. As payers are on the fence as to the value, so they will not spend to get increased adoption. Teladoc’s model does not have a direct to consumer sales effort, and they cannot afford to do so – their valuation is based on growth of signing up more enterprise clients. They are backed into a corner.

Enter a new type of player in this market: Doctor-on-Demand. With Doctor-on-Demand, for a flat fee of $40 per “visit” patients get the same service instant service offered by Teladoc. Initially focused on the direct-to-consumer market, it seemed as if this would be a minnow compared to Teladoc. In a stroke of genius in 2014 the company pivoted to work in the B2B market. They have been able to win huge contracts with companies such as ComCast, by offering to take the risk out of adoption. If no one uses it, the company pays nothing. If lots of people use it, the paying company still saves money (as $40 is less than a face-to-face consultation price). The model has been so successful that numerous competitors have appeared in this space.

Only time will tell who will win the market but I believe Teladoc will lose. A business model decision taken 10 years ago, which is now difficult for them to pivot away from, will ultimately be their downfall.

BlackBerry: Why Even the “CrackBerry” Addicts Quit

Pogoseat: The New Era of Seats for Fans

Student comments on Teladoc: Why the biggest and most successful telemedicine company ultimately will lose