Task Rabbit launched in 2008 under the name of RunMyErrand in Boston. The the time, the 28-year-old Leah Busque was struggling to get to the bottom of her to-do list and wondered if there was someone in her neighborhood she could pay to help out. The idea was to create online marketplace to get most small tasks done. Targeted at young urban dwellers with disposable income, the service connects their customers with independent hourly workers to get the task done. Projects range from house cleaning, over moving help, to Ikea furniture assembly. Even ‘waiting in line’ for the new iPhone or coveted tables at buzzing new restaurants who don’t accept reservations is possible.

After completing Facebooks incubator program in 2009, Busque changed the name of the company to TaskRabbit and relocated headquarters to San Francisco. The service was at the right time at the right place. Post-recession, gig economy services like TaskRabbit were able to tap into the large supply of unskilled labor resources and connect them with San Francisco’s busy tech-elite.

Since then TaskRabbit has raised $50M and is is now available in 47 US cities, 4 UK cities, 1 Canadian city as of October 2018. The company claimed profitability in 2016, yet got acquired in September of 2017 by IKEA for an undisclosed amount.

First and foremost TaskRabbit massively reduces search cost by aggregating demand and supply for everyday tasks and free labor. Beyond that, let’s look at how TaskRabbit creates value for each side of the marketplace independently.

Customer side
An important task to be done for any online platform is to establish trust between the marketplace participants. TaskRabbit accomplishes this though various means:

Contractor side
On the contractor side, the platform creates value by offering a flexible source of income to almost anyone. Taskers get to chose which services they would like to offer, what their hour rates are for each of them, and which individual jobs they want to take on. The company states that the average Task Rabbit earns $35/hour – when they are working. Pre-tax earnings *can* range up to $6-7K for full-time ‘elite’ Taskers who have made a name for themselves on the platform. But outcomes certainly vary. Earnings for most full-time service providers on the platform and part-timers will look much less attractive.

Yet this flexibility comes at a cost. Taskers are considered independent contractors. They have to bring their own healthcare, liability insurance, and materials. And when tax season comes around many first-timers are running into ugly surprises. 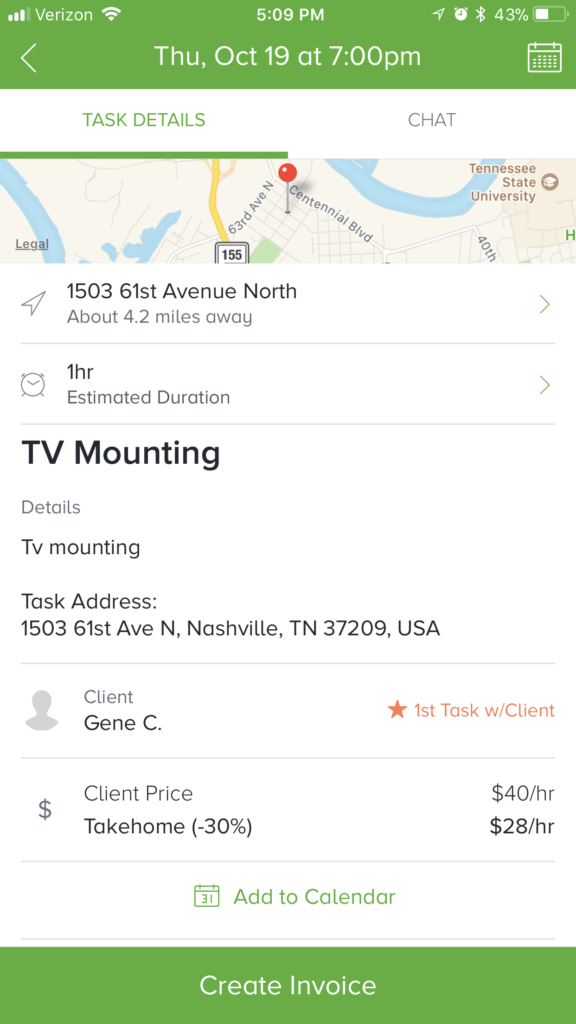 Task rabbit follows a commission model. At this point in time, they charge a 20% Service Fee on top of the hourly rate the Tasker sets. This has certainly been subject of many experiments: At launch they charged 15%, then raised the fee to 30% temporarily in late 2016, dropped back down to 15% in 2017, and eventually settled on 20% today.

Alongside TaskRabbit’s commission model comes a constant danger of platform disintermediation. Let’s take a four hour handyman job as example: After the introduction has been made on the platform, Tasker and consumer meet in person. As most jobs are billed hourly, the Tasker (and consumer) may inclined to bill only a single hour. The remaining three hours can be cleared in cash / Venmo / check to cut out TaskRabbit out of the equation. This lowers cost to consumer and increases profit to the contractor at the same time. If the job has been completed at the satisfaction of the customer, any followup work will likely bypass corporate as well.

Of course TaskRabbit penalizes disintermediation. It violates their ToS and can get the service provider and customer banned from the platform. Yet given their limited ability to detect off-platform transactions, as well as extremely limited value-added services, there just isn’t enough of an incentive to keep routing transactions through the service.

The company certainly has attempted to tackle the issues by experiments with commission rates and offering the ‘Happiness Pledge’. But not at great success. After a longer period of shopping for acquisition offers, TaskRabbit sold for an undisclosed amount to IKEA. Certainly not the gig-economy exit Leah Busque was hoping for when she founded the company in 2008 back in Boston.

[TaskRabbit Quietly Doubled The Cut It Takes From Many Of Its Workers](https://www.fastcompany.com/3065993/taskrabbit-workers-fee-increase)
[What You’ll Really Earn on Uber, Airbnb and TaskRabbit Every Month](https://www.entrepreneur.com/slideshow/296879)
[186: TaskRabbit Was Ahead of its Time, But Leah Busque’s Vision and Persistence Made it a Game-Changer](https://foundr.com/sharing-economy-leah-busque-taskrabbit)
[What’s the TaskRabbit Service Fee? – TaskRabbit Support](https://support.taskrabbit.com/hc/en-us/articles/204411610-What-s-the-TaskRabbit-Service-Fee-)
[VatorNews | How does TaskRabbit make money?](https://vator.tv/news/2018-07-20-how-does-taskrabbit-make-money)

BloomNation: a budding platform for florists