Funding creative projects is expensive.  What artist wouldn’t want to crowdfund a release by getting fans to pay for studio time, production & mastering, and merchandise?  Plenty of platforms have offered artists the opportunity to raise this funding: Kickstarter, Indiegogo, Bandcamp, Bandpage, etc. all allow artists to sell directly to fans or raise money for a project.  Until now, however, the only thing backers received in return was some sort of “perk” based on the amount contributed.  To be fair, for big fans these perks hold serious value.  Signed picture?  Why not.  VIP meet & greet?  Absolutely.  Private concert at your birthday party?  Where’s my checkbook.

However, artists continued to struggle with separating themselves from the noise of the industry.  Most of the backing for brand new artists came from friends and family, while existing artists were only able to leverage their existing fan base, not really tap into a new fanbase.  For backers that aren’t big enough fans of a particular artist to make the perks valuable, where is the incentive to donate?  Especially if they would have to end up buying the album or paying for concert tickets anyway.

Enter TapTape.  The company seeks to turn “backers” into “investors”, where you can actually share in the upside of the artist(s) that you support.  Completely different ballgame.  Several startups have tried to turn the “social value” of being an influencer into a business model, but they all struggled to gain adoption.  With TapTape (still in beta), that could potentially change.  It opens up the crowdfunding well beyond an artists fans and into the general population, where people will invest in order to actually earn returns. 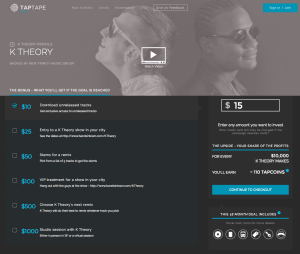 There is still a legal challenge with this equal-access equity crowdfunding model, as the US government restricts this type of investment to accredited investors (which is relatively difficult to achieve).  So instead of turning a cash investment into cash returns, TapTape rewards successful investments with their own digital currency, Tapcoins.  Based on the amount initially invested, users earn a standard Tapcoin return for every $10,000 that the artist makes over an 18 month period.  Artist revenue streams include many sources of cash: record sales/streams, touring, merchandise, publishing, synch, and sponsorship.  At the end of the investment period, Tapcoins are distributed to backers, and can be redeemed for items of value (that aren’t cash).  Examples are concert tickets, Amazon gift cards, or reinvesting in TapTape.  This is the company’s clever hack to get around the accredited investor restrictions.

Imagine investing in an artist on TapTape before they blow up.  Forbes notes that the top artists in the industry earn up to $100 million a year (Beyonce).  That’s a lot of Tapcoins.  Now, access to investing in this level of artist is out of the question, but one could imagine investing in an artist that goes viral on YouTube, pens a hit song, or gets signed to a global tour within an 18 month period.  This exciting potential will certainly drive backers, but will it entice artists?  Are they willing to give up a piece of the upside that they’ve worked so hard to obtain?  That remains to be seen.  So far, TapTape has only one artist project to invest in.  San Francisco-based duo K Theory has opened up to investment, with meager results so far.  41 supporters have gotten the project 12% to completion (the total amount to raise is an opaque amount), with 21 days remaining in the campaign.

TapTape has many obstacles to overcome, and is probably praying that the accredited investor laws change.  But for now, they are pushing the boundaries of how creative projects get funded, and I’m all for that.  I expect this trend to extend into other crowdfunding platforms as well.  Users will start to demand upside when exits like Oculus happen, because these backers took the financial risk early on, and should be fairly compensated.  Who will invest in the next Justin Bieber?