Just because we are social distancing doesn’t mean that we should stop moving. Over the past month, I’ve tried different platforms such as Youtube, Instagram, and Peloton to burn some calories after sitting at home all day long. But none of them are as fun as learning a cool dance choreography on Steezy. For passionate dancers or wannabe dancers like myself, Steezy is not only a good way to exercise but also helps make our techniques sharp from home.

Steezy was founded in 2014 by Connor Lim and Evan Zhou. The co-founders have seen how SoulCycle made spinning a new popular form of exercise, and the studio has now become a lifestyle brand. They envisioned to make dance the next big sporting and fitness category. Steezy focuses on various urban dance styles such as house, popping, hip-hop, whacking, breaking, dancehall, trump, and heels. 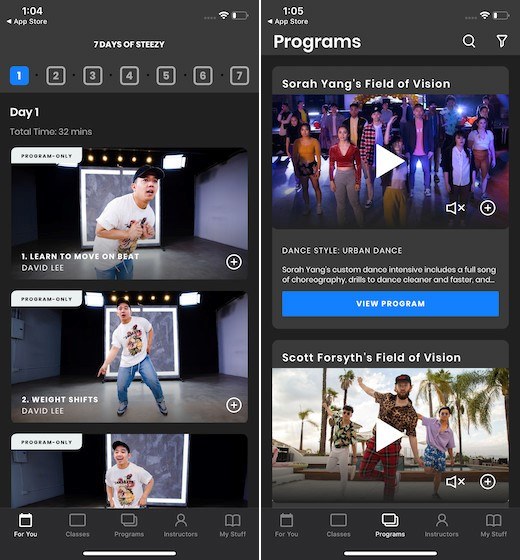 What differentiates Steezy from other live Youtube or Instagram dance classes are its large collection of classes, world-class instructors, and an interface with custom controls that make learning and practicing more efficient. There are hundreds of classes on the platform, with different dance styles, difficulty levels from beginner to advanced, class length, and instructors. It also offers programs (as shown in illustration A on the left) for people to stay consistent on their learning schedule or for those who don’t know where to begin in their Steezy journey. Its instructors are professional dancers who have danced with pop stars such as Justin Timberlake, Justin Bieber, BTS as well as in major dance shows and competitions such as “World of Dance” and “America’s Best Dance Crew”. 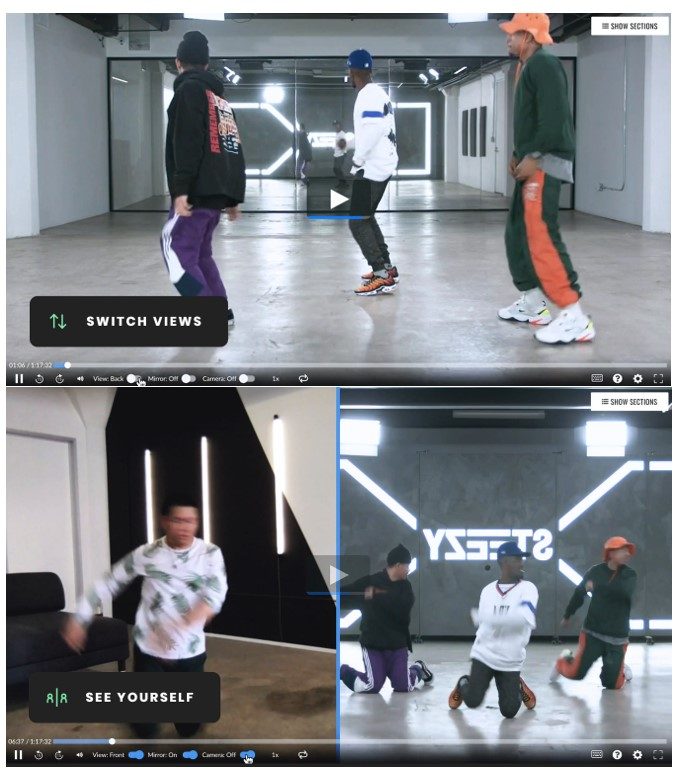 Steezy’s most important differentiator is arguably its user-friendly interface. It allows users to view the instructor from different angles, replay a movement, slow down or speed up the pace, or watch themselves dancing on the screen right alongside the instructor so they can compare the techniques (see illustration B).

Because of its digital business model, Steezy has gained traction as Covid-19 forced people to stay locked in their homes. However, I believe this growth will not be sustainable when the economy reopens because of the following reasons.

First, virtual dance classes lack connectivity and a sense of community. One of the main reasons that motivates myself and many others to keep on dancing is the power of community. Taking a dance class with my friends is fun, engaging and interactive. We could see each other’s movement in-person, encourage each other when one stumbles, and appreciate the others’ unique dance styles even when the choreography is the same. Going virtual means that I would be dancing by myself most of the time and missing the sense of connectedness with the dance community.

In addition, taking online dance lessons means that I could no longer receive immediate feedback from the instructor on what I’m doing well and what I should improve upon. Even though real-time feedback in large-group dance classes is often hard to get due to the sheer number of people in the room, students can still ask clarifying questions or request that the instructor re-teach a difficult move.

Lastly, the market size for the number of potential users is capped, given the small percentage of people who regard dance as a form of exercise that can be done daily or regularly. Compared to users of other fitness apps such as Peloton who can use the apps daily for spinning, yoga or HIIT classes, many don’t dance every day to get fit (except for the professional dancers of course).

To prepare for the inevitable moment when the economy reopens, Steezy can consider the actions below to sustain its growth.

The most important driver for taking exercise classes online versus going to fitness studios is the amount of content which one can browse anytime and anywhere. The digital fitness market is like the movie streaming industry in terms of convenience and the abundance of choice. It is not a winner-take-all market, but it will be a concentrated industry with market share controlled in the hands of a few key players. To grow sustainably, Steezy should consider expanding both the quantity and the scope of its content. Expanding its video library regularly will encourage potential users to try the platform and incentivize existing users to stay with the platform. Enlarging the scope of the content means venturing into new styles that are more reachable to beginners starting from ground zero, such as cardio workouts incorporating basic dance moves, strength trainings involving dance, or tutorials on how to dance better at night clubs. With both the quantity and diversity of content under its belt, Steezy can position itself as an online dance platform suitable for everyone, rather than pigeonhole itself as the online platform for urban dance classes.

Currently, Steezy offers a seven-day free trial, after which plans are offered on a monthly or annual basis at $19.99/month or $99.99/year respectively. This is much cheaper than taking large-group classes in a dance studio, as the cost typically ranges from $40 to $160 per month for one dance class per week according to Everyday Health. In addition to these fees charged by physical studios, registration fees or cancellation fees may be involved, which make going to a dance class a hassle for many. One of the best ways to make potential customers acutely aware of Steezy’s value is to offer free trials. I recommend Steezy to extend its free trial period to a month rather than seven days. While the seven-day trial may be effective in capturing the users who are already passionate about dance , it could be challenging to retain those who have not yet made dance their habit. According to many psychologists, it takes about 21 days to form a new habit. Therefore, it is important to encourage users to use the platform more regularly, so that they can realize Steezy’s great bang for their buck. To accomplish this, Steezy could consider adding features such as allowing users to track their progress and setting milestones and achievements.

Another element that Steezy is currently lacking is the interactivity with instructors and other users. To mimic the community vibe of going to dance class physically, Steezy could consider adding features that could help build a more interactive community – features such as allowing users to comment on and rate classes, upload their own dance videos for instructors and other users to provide constructive feedback, and communicate with each other in a forum. It could also sell Steezy-branded merchandises such as hats and t-shirts and encourage users to upload the photos of themselves wearing those products onto social media platforms to create a community vibe, sending a message to users that “even though we are physically distant, we are all connected by being part of the Steezy community.”

Like the founders of Steezy, I hope that dance will be a popular fitness category, not just for those who can move but for everyone, young or old, experienced or completely new. It will be a long journey. But let’s hope that this vision can come true, with Steezy being a key player shaping the future of exercise.

The future of Harvard Business School Online: Disrupting or being disrupted?