In January 2011, Starbucks launched their mobile payment product. Starbucks beat to market Apple and Samsung’s payment system by years, with Apple Pay launched in 2014 and Samsung Pay in 2015. Instead of investing in new complex technology with NFC (near-field communications), Starbucks built a 2-D barcode scanning system that replicated their gift card system. (1)

The new payment system proved to be a success, with rapid adoption and usage of the mobile app. As of Q3 of FY ’17, 30% of US transactions were paid through the Starbucks app. Starbucks has captured high value from these customers, with mobile app users spending approximately 3x more than the average Starbucks customer, a driver for same store sales growth. (2) Additionally, the increased usage of payments through the app drive operational efficiency as Starbucks is able to reduce credit card costs (as consumers are paying with a “gift card” not with their credit card directly) and enable faster execution of orders. (3) 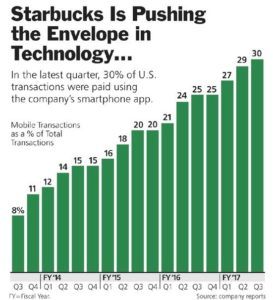 Today, Starbucks is continuing to think about how they can continue to use their digital platform to increase customer loyalty and drive higher spending. They’ve expanded their mobile platform beyond payments and rewards to include ordering and personalization.

Starbucks launched Mobile Order & Pay nationally in the US in 2015 with the goal of continuing to extract higher sales and build customer loyalty through order ahead functionality. While Starbucks has seen quick adoption of this capability, with 9% of US orders placed in advance as of Q3 FY17, there have been a few hiccups, with increased usage of mobile order-ahead actually disrupting store operations and in-store experiences. In addition to the launch of order ahead capabilities, Starbucks has begun testing personalization opportunities to incentivize customers to purchase in specific ways. This is where Starbucks will continue their digital investment moving forward. (4)

As a winner thus far in merging the retail and digital experience, creating value for customers and capturing that value over the last 7 years, Starbucks now has a target on its back. In 2017, McDonalds announced their mobile order app, joining the likes of Dunkin’ Donuts, Chick-fil-A, Domino’s, Taco Bell, and Walmart in attempting to leapfrog Starbucks and their period of digital innovation. (5)

Is Starbucks’ success replicable? I believe two elements of Starbucks’ model could create the same level of viral success for other retailers or restaurants. First, their digital and payment experiences must be tightly linked to a loyalty or incentive program. Secondly, critical to Starbucks’ success was also its role as a common daily purchase for rewards users. Consumers quickly saw the value of the loyalty card, the ease of payment and developed a new habit to pay through the app. Without being a store or a restaurant that a consumer frequents often, I don’t believe consumers will invest in a retailer’s mobile app. Consumers will likely only invest in digital experiences with a limited number of core retailers that they interact with commonly and derive immediate value from.  So, it is likely only a handful of retail outlets, including Starbucks, will be able to pursue this strategy successfully, while others may have to find another way to engage and interact digitally with their customers.