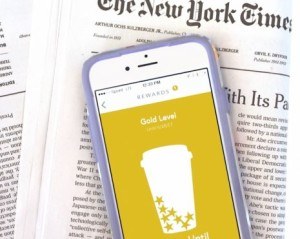 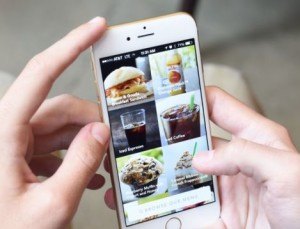 Starbucks is a great example of a company “winning” by leveraging digital technologies to create value. Technology is increasingly disrupting traditional “brick and mortar” retail businesses, and Starbucks has long been recognized as a leader in harnessing digital tools to advance its brand and separate from its competitors.

While many companies have followed Starbucks’ lead, several recent announcements reflect Starbucks’ ability to outpace its competitors in the digital arena. First launched in 2009, the My Starbucks Rewards (“MSR”) program has evolved from a mobile rewards app to a multi-faceted digital ecosystem. A key innovation is the recent announcement of Mobile Order & Pay, allowing customers to order food & beverages (for pickup) in advance of visiting a store. This initiative is particularly impactful for Starbucks, as long lines during peak hours may dissuade potential customers from visiting its stores. First launched as a pilot in Portland in December 2014, Mobile Order & Pay has now expanded to ~4,000 U.S. stores (will be fully launched across the U.S. by the end of the year). Mobile ordering provides customers with convenience while delivering margin benefits to Starbucks (inventory management / improved throughput times). In a recent investor conference, Scott Maw (Starbucks’ CFO), confirmed that early results of this rollout are extremely promising with significant increases in customer traffic being realized by participating locations.

Though other retailers have adopted mobile-based loyalty programs and even mobile ordering programs, the scale of Starbucks’ network seems unparalleled. Today, there are ~10 million active MSR members, and ~20% of all transactions in U.S. Starbucks stores are made through mobile payment. This industry-leading penetration provides enormous data / analytics which Starbucks’ marketing team can utilize to better foster customer loyalty and user engagement (e.g., personalized offers). It is unquestioned that this digital leadership is a key factor in Starbucks’ ability to demonstrate impressive earnings growth quarter after quarter. In its most recent quarter, the Company announced a 4% increase in organic traffic, a truly impressive figure for a company with ~22,500 stores and ~$16bn revenue.

A second (and more transformational) innovation is the Stars as Currency program. Recognizing that many of its retail peers have established customer loyalty programs, Starbucks has further differentiated itself by creating a virtual currency whereby its customers earn digital “Stars” whenever they buy Starbucks products using its mobile app. “Converting” customers to this currency will increase customer stickiness and drive more traffic across Starbucks’ global footprint. In summarizing this program, CEO Howard Schultz said, “We don’t want to create something that is commodity-skewed; we want to create something that has real value.” (1)

…In that spirit, Starbucks has begun leveraging this virtual currency to create value through external partnerships. This summer Starbucks announced strategic partnerships with Spotify, The New York Times and Lyft. Under these agreements, customers who make purchases at these three companies will be rewarded with “Stars” that can be redeemed at Starbucks locations. These collaborations expand the Starbucks ecosystem beyond its in-store network, and creates additional engagement across these participating businesses. For example, in the deal with Spotify, Starbucks employees in the U.S. will receive Spotify Premium accounts, and MSR members will have additional opportunities to engage with Spotify in choosing in-store music selections. For Lyft, all drivers will have the option of becoming “Gold” level MSR members. Finally, as part of the NYT agreement, certain free content will be available to MSR participants.  This is a win/win arrangement, and for Starbucks this strategy of partnering with other businesses creates a larger digital ecosystem to effectively grow Starbucks’ total addressable market – connecting new customers to the Starbucks brand while further enhancing its relationship with existing consumers. For example, there are over 60 million current Spotify users, representing an enormous opportunity when compared with the 10 million MSR members today. Again, Starbucks is leveraging digital technology to better interact with its customers while improving its profitability…further differentiating itself from other retailers.

Given its track record of creating and capturing value with digital technology, Starbucks will certainly continue to scale its digital ecosystem with new offerings and partnerships…there is no question that Starbucks will continue to harness digital innovations to disrupt the traditional retail business model.