Splitwise has been a go-to for many folks who need to split expenses with their roommates. A feature that I think could be enhanced with crowds would be by:

2) To use the data that the customers are inputting to help other customers cut costs on housing-related expenses.

The current plan seems to be for Splitwise to monetize by taking a cut of transaction fees [1] by letting people settle up with each other through Paypal, Venmo, etc (shown below), but as a user, I feel less comfortable paying through Splitwise (out of fear that I will be charged extra), and I imagine other users feel the same. What I would like instead, would be for Splitwise to be more transparent about a direct payment system for sharing their data, as well as a more social experience, so I feel more engaged and trusting of the platform. This open ask for money in exchange for information I think is on par with their mission that is focused squarely on fairness [2]. 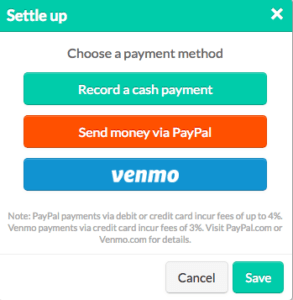 I’ve always wondered how Splitwise gained so much popularity given that a lot of the marketing is on a small scale. Generally, someone in a single friend group asks everyone the group to join splitwise if they haven’t already and then to specifically join the group. I’ve seen it used primarily amongst roommates but also for shorter term coordination like group trips. While I enjoy the value of privacy, I also wouldn’t mind seeing the other groups within my contacts, especially when I’m in a school environment. I don’t spend a ton of time on the Venmo newsfeed, but knowing that my friends are on it and using it regularly makes me use the app more.

The data from their site in aggregate (particularly to protect privacy) could be very valuable to customers trying to cut down on group-related expenses. They could take an approach like Mint does where they have sponsors (like credit card companies, retirement savings accounts, financial advisors) who are conveniently integrated into the site in the areas where you are thinking about it. I can see a world where they have a savings tab where they help you consider different carriers for housing or trip related expenses – things like group deals and information on other sites who want to advertise towards groups. With a large enough crowd, the site could even tailor the offerings to the seeming size/demographic of each participant based on the purchases they’ve made in the past and/or the types of groups they’ve been a part of.

Another way to use the data would be more of a Transparent MBA approach, where you either have to give data to get data, or, they could just sell the data directly to consumer. I personally would pay something like $5 to access data on the prices of internet carriers in my area and get estimates so I don’t overpay for Comcast vs. Verizon if they are both available in my area, and I don’t want to do the work of researching both extensively. If the site could tell me what most of the people in my area and demographic do, I would pay for that ease.

They already have a substantial amount of users, but going more social and thereby increasing their user base would make their data even more accurate and helpful.

[2] “What Is Splitwise?” Wordmark, www.splitwise.com/about.

Vigilante App: What Happens when Ordinary Citizens Take Crime Fighting into their Own Hands?

Student comments on Splitwise: Go Social and Use Data Fairly