The major label music industry is currently shaking in its’ boots. Before the advent of the internet, major music labels experienced healthy profit performance and consistent revenue growth from strong physical album sales. As high-speed internet access proliferated throughout the United States, the market for music shifted and record labels struggled to adapt. Currently, the industry has been emphasizing streaming platforms such as Apple Music and Spotify as legitimate venues to access music. However, these platforms generate less revenue for record labels and artists than physical album sales and digital downloads.(i) Given that consumers can now choose to stream a track online rather than purchase an entire album or individual track, industry operators must rely on a large volume of consumers to realize revenue through these newer platforms. Music streaming will play an integral role in the future success of the industry as the number of internet connected devices increases over the next five years and the altered behaviors in which consumers discover, buy, and listen to music.

Enter: SoundCloud. SoundCloud is an online audio distribution platform and music sharing website that enables users to upload, promote, and share audio, as well as a demand side platform (DSP), enabling listeners to stream audio. It considers itself the world’s largest music and audio platform, enabling discovery from the “most diverse creator community on earth.” Further, creators “… use SoundCloud to both share and monetize their content with a global audience, as well as receive detailed stats and feedback from the SoundCloud community.” (ii) In a lot of ways, SoundCloud envisions a more equitable model for artists as they seek to democratize access and ensure requisite royalty payments for [particularly] independent (“indie) artists. Their journey to this point however was fraught with concerns regarding their scalability and sustainability.

The early success of SoundCloud was entirely contingent upon network effects. Listeners could make an account for free and listen for an unlimited period. The social nature of the app encourages discovery and virality, leading to the discovery of huge stars today such as Lorde and Chance the Rapper. Further creating value, SoundCloud allows artists to upgrade to a paid tier to upload content and obtain access to listener analytics that could ideally drive fan engagement and artist content / product optimization. SoundCloud eventually evolved it’s platform beyond songs into podcasts and other forms, increasing the diversity of offerings to attract more users as popularity grew and major music labels took notice. Access eventually touched over 180 million consumers. (iii) In SoundCloud’s attempt to catch the world’s attention, independent artists were not getting paid, and music labels minced at the growing piracy of the platform (as well as lack of payment for creating accounts for their mainstream artists). The cost of growth in this case eroded the value proposition to two key stakeholder groups. While users benefitted, value decreased for the creators and owners of music. While Record labels in particular embraced competition in streaming such as SoundCloud as it presented a new revenue source and created new channels to reach new listeners – all contingent upon abiding by royalty fee structures. Artists signed to said labels embrace the new channel as well; however, exposure of their content is beyond their control and an appropriate share of economic return is not provided.(iv) Conversely, new artists seeking a record label contract find significant value in the exposure of SoundCloud, making the prospect of financial security in their medium more attainable.

The core of SoundCloud is an unrelenting supply of independent artists fueling the platform. Their overreliance on artists paying for listener analytics is a weakness in the business model as it doesn’t lend itself to scale. Premium accounts for artists (ranging from $55 – $135 per year) is a hard sell given streaming competitors (e.g. Spotify, AppleMusic) do not charge for the uploading of music. Further, the analytics offered to artists on the platform are largely aggregated and do not provide comprehensive insights and value for an artist to grow. (v) In order to make this sustainable, this aspect of the platform needs to be enhanced significantly. Advertising on the platform and charging subscription fees to users are also avenues for SoundCloud to strengthen its business model but also provide an opportunity to enable payment to artists for their work. Recently, the company’s attempts to solve this have been in new product lines such as SoundCloud Premier and Repost by SoundCloud where the company monetizes independent artists directly with a full-service marketing and distribution engine.

Today, SoundCloud has announced a sweeping change to its offering that will better address existing gaps in sustainability and value creation. In what the company calls “fan-powered royalties,” a SoundCloud subscriber’s subscription fee or advertising revenue will be divvied up among the artists they actually listen to, rather than going to a big pot and being split up among the platform’s most popular artists. (vi) For the first time, the company will pay independent artists a share of their actual listeners’ subscription fees. Currently, most music streaming platforms reward the world’s biggest stars with the most royalties. Ultimately, independent artists who might not have massive reach, but also have a loyal fanbase, do not make much money because they represent a smaller portion of the overall streams. This value creation strategy is a significant differentiator for SoundCloud and moves the industry towards seeking equity for independent artists. The outstanding question at this point is how the major music labels will react to this development as it will continue to disrupt and threaten their position. 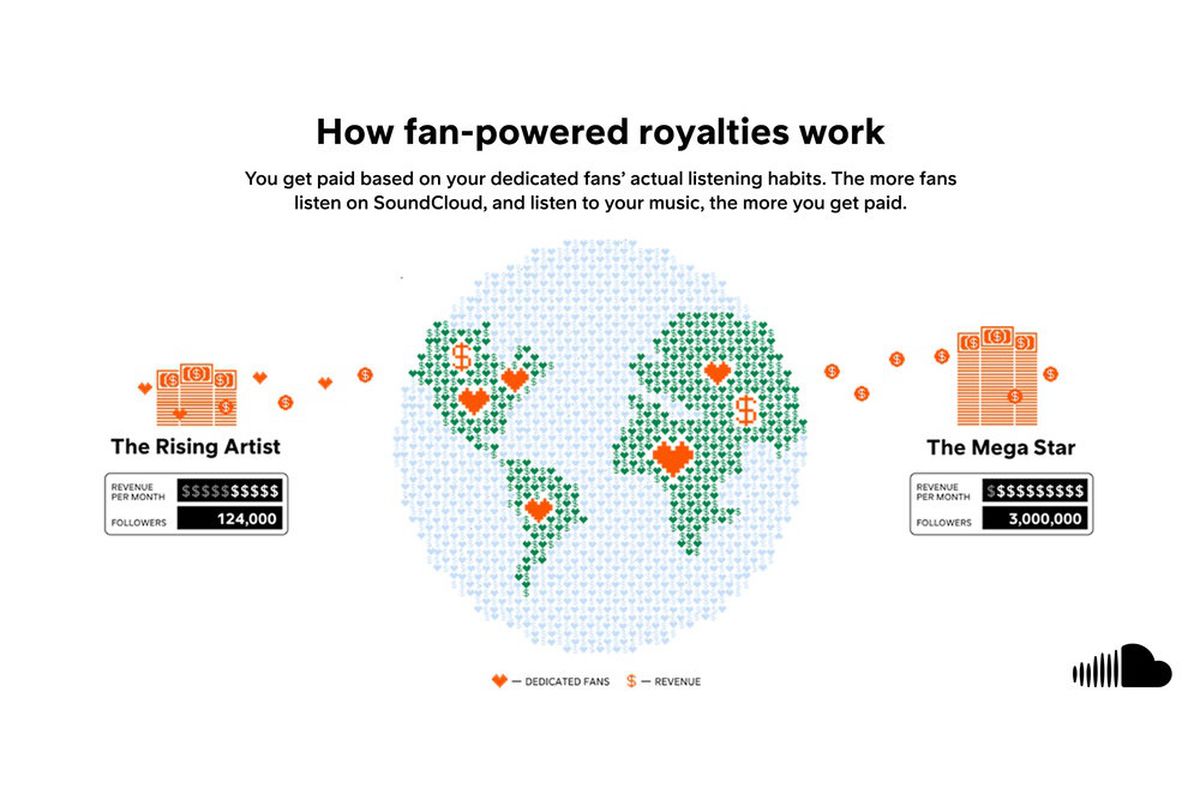 MindBody: the playbook for SaaS-enabled platforms

Student comments on SoundCloud – Pay me what you owe!