How does a company highlighted at the Harvard Business School as a preeminent example of disruptive innovation become a loser?  Clay Christensen, in his 2003 book The Innovator’s Solution, chronicles how Sony disrupted both the radio and television business beginning in the 1950’s – an example still used today in the school’s wildly popular Building and Sustaining Successful Enterprises (BSSE) course.[1]  So how did Sony, once riding the technology disruption wave, find itself on the verge of wipeout?

Is Sony really a loser?  While the casual observer will recognize Sony’s failing brand power in music and consumer electronics, they can point to the company’s relatively stable stock price, ADR: $47.94 (up from the high teens in 2012), and respectable annual revenue ($68.35 Billion in 2017).[2]  This passing glance would hardly indicate Sony is down and out, but a second, more detailed, look in time reveals a company that has missed huge opportunities and now finds itself dwarfed by once negligible competitors; Sony’s market cap is now 1/9th of Samsung and 1/30th of Apple.[3]  Furthermore, over the last decade, Sony’s market share across almost every business unit has continued to erode (Figure A), with revenue declining (Figure B) and profits (Figure C) in crisis.  In short, Sony may still be in the race, but winning is not in the realm of possibility in the short term. 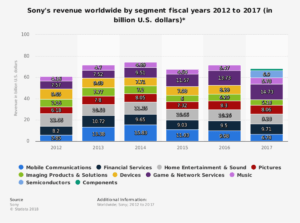 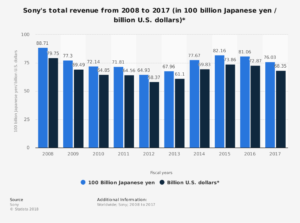 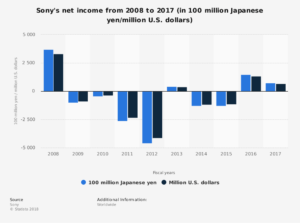 (Note: The scope of the following analysis will be limited to the consumer electronics business (excluding gaming) and will not address business units such as music and financial services).

Why is Sony losing?  Those of us who grew up in the 1980’s and 1990’s will remember Sony and its former glory, a name once “synonymous with cutting-edge technology, sophistication, and desirability.”[7]  Today, a simple Google search for: “why did sony fail” will overwhelm a user with 1,730,000 opinions as to why Sony is no longer the innovative, industry leading powerhouse it once was.[8]  The Harvard Business Review’s Sohrab Vossoughi attributes Sony’s fall from grace to its failure to “emphasize the delivery of powerful and resonant user experiences” while Hiroko Tabuchi of the New York Times highlights the “disastrous infighting” that plagued the company’s entrance into digital music players, flat panel televisions, and mobile phones.[9] [10]

One chapter of the Sony decline story was written by the company’s failure to adjust its business model, in particular, how it creates value.  As technological innovations accelerate and industries change, companies should reevaluate their strategy or face possible extinction.  This lesson is exemplified by the classic disruption story of Kodak: Kodak continued to see itself as a camera film company and eventually went bankrupt, while its rival, FujiFilm, reinvented itself as an imaging technology business, supported by a pivot into the medical imaging market.[11]

Similar to Kodak, Sony did not reevaluate its strategy in the midst of technological change.  Since the 1950’s, when Sony began its disruption of the consumer electronics industry, Sony remained focused on hardware, building extensive R&D capabilities that delivered popular sustaining innovations such as the Sony Discman and the Sony Trinitron television (Figure D).[12] 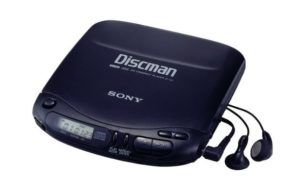 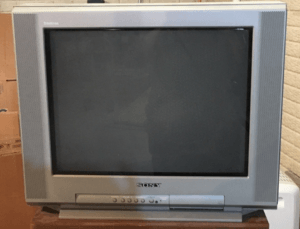 Sony’s successes from the 1950’s through the 1990’s led it to overemphasize its hardware business and in early 2000’s, while Sony remained focused on innovating and selling hardware, consumer electronics became increasingly commoditized for several reasons.  The first reason was the entry of low cost manufacturers from South Korea and China that were able to deliver lesser quality electronics at lower cost.[14]  Second, the industry began to shift from hardware to software to create a better user experience.[15]  For example, it was no longer enough for Sony to manufacture the next smaller, lighter, MP3 version of its famed Walkman line.  The first iPod, was more than just a digital music player – it was a new experience that was hardware, software, community, and social identity.  Sony failed to recognize this fact and was late to take advantage of this and other opportunities.  In contrast, other companies, such as IBM, the trailblazer of the consumer PC market in the 1980’s, identified this shift to software and the commoditization of hardware.  IBM made a conscious decision to change how it created value for consumers and in 2005, IBM sold its PC business to Lenovo to double down on software and services.[16]

Overall, Sony failed to reassess how it created value which hindered its ability to make the shift from hardware to software.  The underlying reasons for Sony’s inability to make this transition are much less clear, but the resulting impact cannot be denied.  Going forward, Sony should take note of its successful gaming platform and the value it has created for users via a software and networking driven experience as a potential model for preventing its own extinction.

Student comments on SONY: from disruptor to disrupted