Snapchat quickly grew to threaten incumbent Facebook’s position in the networked mobile social industry by offering a slightly different value creation model for its users. Snapchat launched in September 2011 with zero media coverage, and truly began to take off that fall when Spiegel’s mother told her niece about the app. The niece’s Orange County high school found Snapchat to be an ideal substitute to be social during school hours, as the Facebook app had been banned from their school-distributed iPads, and with Snapchat the evidence of a snap immediately disappeared. Students could focus on quick communication to their friends during school moments, when longer browsing or posts (such as what Facebook offered) would not have been viable. App usage peaked between 9:00 AM and 3:00 PM – school hours. Because students could not use the incumbent app, and Snapchat offered disappearing messages, students encouraged other students to join and the network effects took over. The app quickly spread to other schools.

By January 2012 the number of users had grown to 20K, which turned into 100K by April 2012 alongside $485K in Seed being raised. Additional users cited appreciation for natural and quick communication versus the curated content Facebook often displayed and seemed to encourage given the long-standing timeline views. Growth skyrocketed as users encouraged their friends to switch to this new medium, and the high-frequency quick messages kept users engaged and strengthened network effects. By June 2012 more than 110M photos had been shared, and by October 2012 +231 photos were being shared per second. Two months later, +50M snaps were being sent per day. 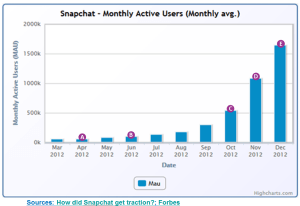 Value capture for Snapchat also looked different than that of Facebook. While Facebook boasted long user time periods spent with their product (~2.5 hours per day), Snapchat saw Daily Average Users opening the product 13-14x per day for 1-4 minutes per session. Users were encouraged to visit the app frequently for quick bursts at a time. Accordingly, brands could start to engage in quick, more authentic-seeming bits with their fans, and Snapchat could ensure the snaps were fully viewed as users had to hold their thumb on the screen. Because brands could see which of their snaps had been viewed, they knew whether or not their fans were engaging, and felt encouraged to continue productive ads.

Snapchat’s operating model institutionalized those elements of its product that proved different than incumbents. Instead of focusing on total duration per session, Snapchat embraced number of sessions, aware that its snaps model encouraged frequent opens of the product. The company measured metrics such as K-factor, seeking to understand this virality coefficient of its users in terms of how many friends each new user invited, and how many of those invitees converted to users. Cohorts were mapped by time and plotted against product changes in order to analyze how product changes affected acquisition and retention. The company sliced its users by content producers versus content consumers in order to understand what the mix looked like, and what sorts of mixes would be most compelling by country. Very importantly, the company also prioritized technical metrics such as load time, buffering, hangups, and crashes, recognizing that as theirs was a product opened for quick bursts frequently, any issues with the product in those quick moments would result in user loss.

Because Snapchat was able to realize and capitalize on a mobile communication model not being offered elsewhere, the company was able to fly ahead of competitors in this new style of social interaction. The company now has approximately 200M users, and network effects that would be hard to steal share back from in this model.

UberPOOL: The New and Improved Tinder

Student comments on Snapchat at School