Founded in 2011, Snapchat is an image messaging and multimedia mobile application which initially differentiated itself by allowing users to share images that are ephemeral and self-deleting. The company claims itself a “camera company” and aims to reinvent the way people communicate with each other[1].

Scaling up the platform

Snapchat has scaled its business rapidly from inception, growing to $404 million in gross revenue in 2016. DAUs spend an average of 25 to 30 minutes and visit the app more than 18 times a day[2]. The image messaging and 24-hour self-deleting function has differentiated Snapchat from its competitors i.e facebook, whatsapp and contributed to its success among users with age brackets under age 30[3].

Snapchat can attribute its success to company’s focus on innovation and risk-taking mentality to improve its products. The strategy allows Snapchat to take mindshare quickly among the Gen Y and Z, increase user engagement hence monetize through advertising.  For example, since 2013, Snapchat started to innovate its platform product featuring a broad selection of camera lens filters which elevates users’ photo sharing and social networking experience; curation of community live stories feed which makes viewing experience more convenient and etc. The rise of its fan group also garners itself a list of high profile brand partners. These partners not only generate regular ad content tailoring for the target users through Snapchat’s platform but also sponsor photo lens and avatars’ costumes in Bitmoji, creating a fun experience for their ad campaign. Since younger people are spending more time on mobile devices and sharing videos, Snapchat seems to be well positioned for the growth expected in mobile and video digital advertising. 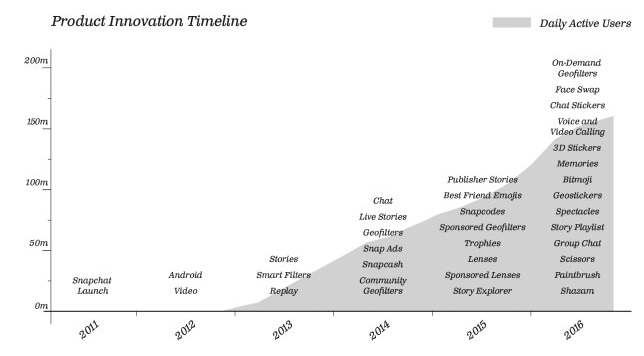 The growth of the DAU above demonstrates Snapchat’s strong network effects. This speaks to how innovative and well received Snapchat’s products are. On the other side of the platform, Snapchat also establishes partnerships with top brands and publishers such as Burberry, Calvin Klein, CNN, Cosmopolitan, Domino’s, ESPN, Gucci, GE, NFL, People, Starbucks, Taco Bell, Victoria’s Secret. Relative to the competition, there is a sense that Snapchat is a better reflection of your “real” life whereas Facebook and Instagram portray only an embellished life. With revenue per user of only $2.14 in North America compared to Facebook’s $19.81, Snapchat has significant room for monetization upside.

However, the unique value proposition of the platform could be a double-edge sword. By merely focusing on Gen Y and Z, Snapchat has not made much progress in attracting the user group with age > 30, which another core category advertisers care. Its DAU growth in the last 2 quarters has also slowed down, which indicates challenge in its incumbent group. By contrast, Facebook and Instagram have a better balance among users across different age brackets. From advertisers’ perspective, it’s difficult not to multi-home.

Took a glimpse of the current ads contents on Snapchat, most ads are very tailored to the taste of younger generation, appearing cool, fun and light hearted. Despite of the high ROI for selective ad campaigns now, Snapchat has to either continue increase the ARPU of its current user base or invest in products to penetrate into older age segments. Because Gen Y and Z in multiple instances have proven to be a bit flaky and have shorter life span on new products. Snapchat cannot afford only focusing on this user group in the long term. Facebook and Instagram recently also introduced video feature into their social apps. The continue efforts by the competitors and the limits of Snapchat’s target audience will undermine Snapchat’s ad wallet shares growth

Look forward and reason back

The digital media advertising market is expected to grow at 46% in the US next few years outpacing the growth in other traditional channels such as TV, radio etc. Hence Snapchat is in a favorable upward tunnel and I believe in the near term they are able to continue capture value through its incumbent users. However the competition is becoming more fierce in the digital ad space. In the end a sustainable ROI is what advertisers care about. Snapchat should continue invest in product innovation, data analytics to increase user penetration and activity, and advertiser’ money spent efficiency.

Having said this, its recent innovation into hardware business Spectacles have not sustained its legacy on the software side, and is seemingly throw itself towards a more competitive battle field with mobile phone makers[4].

Box: Defending its Business through a Platform

Student comments on Snapchat, a “camera” for Gen Y and Z?