Shopify burst on the scene in 2004 as a straightforward way for merchants to set up an online store at a hosted domain. The Canadian firm initially gained traction through its product superiority and affordability. Merchants and customers loved the interface, finding it easy to use and reliable. Through the years the product has evolved into a central hub for small merchants to run their business. In addition to providing the front-end interface and cloud-based domain hosting, Shopify now manages inventory, customer service and fulfillment. The platform can support the entirety of a merchant’s online business. Shopify has also evolved its presence across digital channels (social, web, mobile), and has even developed solutions for the brick & mortar portion of a business. The platform currently supports 600,000 merchants and has made successful forays into powering online stores for enterprises like Nestle and Red Bull.

Shopify makes money through subscriptions and value-add solutions. They also earn a tiny amount of revenue through CC fees and transaction fees (only when merchant doesn’t use Shopify pay). Traditionally, the company has found a way to offer the market leading product at the lowest price in the market (although they have recently raised prices).

What is most interesting about the Shopify model is how they have built this dominant platform presence without overwhelming network effects, even though they share many experiences with network-effect driven business (e.g. viral growth, low CAC). 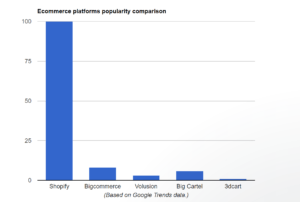 At this point, Shopify has made considerable investment in their platform, adding new features with great frequency. Additionally, they have ingested millions of transactional data points that improve their product and enable their customers. Finally, Shopify has opened a slice of the ecommerce pie to small merchants all over the world, lowering the barrier to competition with Amazon et al. by offering a great solution at an affordable price.

All these things amount to a structural advantage for Shopify against competitors. Much like Intuit did with tax and other software, Shopify has built a fantastic business through these structural advantages. The question is, how do they continue to grow against the backdrop of increasing competition and high market valuation?

First, Shopify intends to continue moving upstream to service more enterprise customers. These customers have a higher LTV for Shopify, and while their core mission will still revolve around small businesses, they intend to bring in more Enterprise business.

Second, Shopify continues to expand its range of services to existing customers, through things like additional products, payment solutions, and fulfillment options.

Shopify has also begun offering financing services. This seems like a natural progression for a company with small business customers, however I would be wary of how deep they dive into this business (for many reasons).

Finally, Shopify has found success turning competitors into cooperators…for now. Amazon & eBay have both agreed to allow Shopify merchants to sell through their platforms, which has been a nice boost for Shopify merchants’ sales. Shopify maintains control of the customer, with Amazon and eBay serving primarily as an advertising and lead generation channel (the customer is sent to the Shopify powered merchants site). The danger in this strategy lies within the predatory position of Amazon. For now, Amazon seems content to allow Shopify to own this customer so long as they are generating more 3rd party volume. For now, Amazon has either made the decision that they don’t want to own that part of the customer, or they don’t want to invest and compete with Shopify’s stellar platform.

I keep saying “for now” because neither of those decisions sound like long term Amazon decisions.

The rise of a digital agriculture platform