IdeaExchange was launched by Salesforce over 10 years back and has been instrumental in shaping the product roadmap of Salesforce since then. In its essence, it is a place where the users of Salesforce can post ideas which can then be voted on by other members conveying its importance. The Salesforce product team members in turn keep an eye on the ideas, pick up relevant ideas and reply in between on whether an idea has been picked up or is under development or why it is not being picked up – thus ensuring transparency in the community and fostering greater collaboration. This is a great example of using the ‘wisdom of the crowds’ for technology product development.

The below diagram is a snapshot of how the IdeaExchange platform looks like: 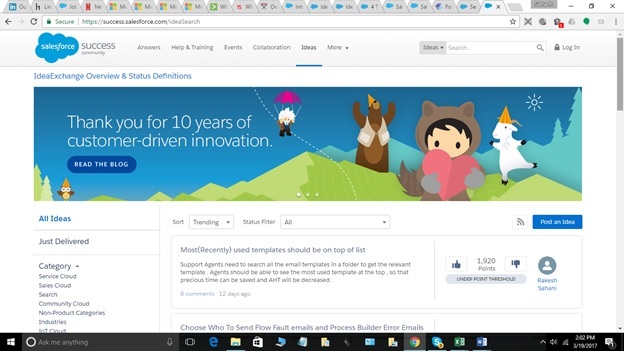 The below diagram succinctly communicates the working of IdeaExchange: 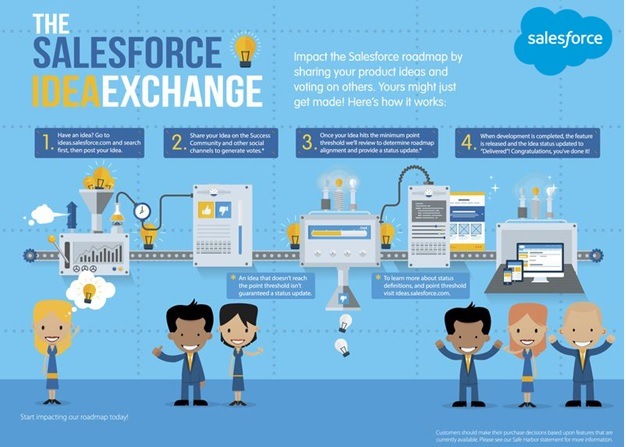 The value creation is happening in the following ways:

1. Allows users to influence the product roadmap in a transparent and quantitative manner, democratizing idea generation for Salesforce
2. Allows Salesforce’s partners to build the ideas suggested on the IdeaExchange platform either by users or Salesforce team members.
For example: One Salesforce partner, Appirio developed integration capabilities between Google and Salesforce.com based on a post on the IdeaExchange platform because the Salesforce team did not have the time to develop the functionality. It was able to create the functionality within 6 weeks and it soon became the top app on Salesforce AppExchange. [Source: c]

The value capture is happening in several ways:

1. The ideas allow Salesforce to build better products (by gauging level of need of various ideas) and thus make them stickier.
2. By acting as a source of validated ideas for the partners, the partners are more incentivized to stay on the Salesforce platform and build better applications complimentary to core salesforce product offerings.
3. By providing a transparent and simple mechanism for users to make their voices heard, Salesforce not only creates engagement among its users but also makes them feel a part of the product development teams thus ensuring greater level of stickiness with Salesforce.

From the user’s perspective, one challenge is that for an official response from Salesforce an idea should receive 2,500 points (i.e. 250 votes). Thus this requires one to not only post an idea but also to build support around the same using Success Community (Salesforce), Chatter (Salesforce) or other social media channels such as Salesforce, requiring extra effort. [f] However my personal take on that if one feels the acuteness (impact of the need), one will try and garner the votes – thus the effort invested is a measure of the acuteness of the need felt by the user. And if one is able to get more than 250 votes (both through ones own efforts and organically) it also suggests how much is the need felt across the spectrum of users.

What has been the impact of IdeaExchange on Salesforce?

The impact on Salesforce has been huge. In the first 10 years of its existence it received over 1.1 million votes, out of which it delivered close to 30% of the product suggestions. These translate into several hundreds of product features over so many years. To name a few features such as Salesforce for outlook [Source: d] and the process builder feature [Source: b] are direct outcomes of the ideas posted on IdeaExchange.
Infact, in the just concluded spring release Salesforce launched 61 ideas from the IdeaExchange suggestions. A few of the top ideas in this release for Salesforce based on Idea Exchange were Search for Contacts by Account Name, Ability to Search on Archived Articles, Customize Columns on Step 1 of Merge Accounts etc [Source: e]. 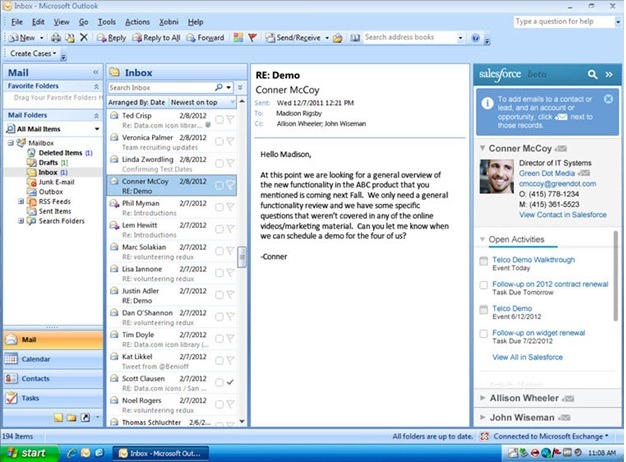 The positive impact of IdeaExchange on Salesforce inspired Dell to launch IdeaStorm built on top of the Salesforce Ideas platform and similarly Starbucks launched MyStarbucksIdea.com [source: c]. Both these initiatives based on the intelligence of the crowd have become the innovation engines for their respective companies and are inspired from the IdeaExchange by Salesforce. Thus, IdeaExchange has not only fostered crowdsourced innovation for Salesforce but has acted as a torch bearer for other companies to follow.

Student comments on Salesforce IdeaExchange: CrowdSourcing Ideas from the Users!!