“Retail is dead” – how many times have we all read this headline. But retail isn’t necessarily dead. Yes, retail as we have historically thought of it is dead, but for those retailers who have been able to adapt to and integrate digital technologies into their current strategies are bucking this trend.

Amazon’s undeniable dominance across so many retail verticals, along with the emergence of start-ups capitalizing on direct-to-consumer, online-only models, are putting undeniable pressure on traditional retail models, as their long-established economics and operating models just can’t compete with new entrants’. The numbers speak for themselves – in 2017, there were an estimated 9,452 store closings, which is 53% more than there were during 2008’s Great Recession.[1]

While many retailers’ doors are shuttering from this pressure, we’ve also seen an interesting trend towards increasing brick and mortar presence. In fact, retailers such as Warby Parker, M. Gemi, Bonobos, and even Amazon, have all migrated from online-only models to establishing physical footprints. What’s important to differentiate is that these retailers are building offline presences in new ways, ways that emphasize what experts refer to as “experiential retail — creating destinations for customers that go way beyond the act of purchase and immerse customers in a 360-degree brand lifestyle.”[2]

The retailers that continue to excel in this rapidly changing retail environment will be those able to mesh the online, digital world with the offline world. Unifying these worlds however, is complicated – consumers’ actions, such as browsing products and adding items to a bag, suddenly become a black box when taken offline. Brands that can identify customers offline and can personalize experiences based on their existing knowledge of the customer will ultimately deliver stronger experiences.

Lastly, but perhaps most importantly, retailers must find a way to convert these offline experiences and relationship building tactics into sales.

One company that has ridden this digital wave particularly well and has made considerable efforts across all three of these areas is Nike, positioning them to both create and capture value in this new environment.

Create experiences that engage customers with the brand 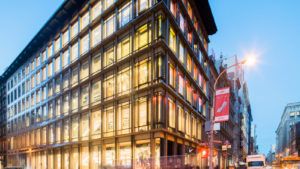 Nike’s latest innovation is Nike Soho – Nike’s new 5-story flagship store opened in NYC in November 2017. According to Nike’s press release, the store offers each individual a “personal sport experience,”[3] regardless of the type of athlete you are. 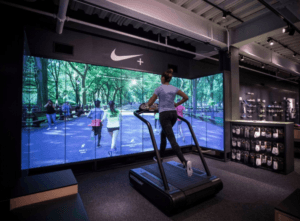 The experiences offered are broad and diverse – ranging from a full basketball court “trial zone” with cameras at multiple angles to record the action, to gait analyses conducted by staff as you run surrounded by screens recreating races. 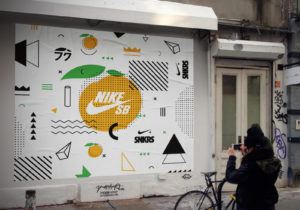 For its sneaker addicts, Nike has also experimented with its SNKRS app. Geo-targeted campaigns where users can purchase exclusive sneakers from the app, only after traveling to certain locations to unlock secret codes, keep these consumers engaged.

According to Nike’s press release of Nike Soho, “the store creates a seamless link between Nike’s digital and physical platforms,” and appears to be solving this enduring challenge. Nike actively cultivates its community through its suite of free apps – Nike Run Club, Nike Training Club, SNKRS, and Nike+ Fuel – and can lean on its installed user base here to help track and identify customers as they engage with Nike offline. Even when customers leave the store without making a purchase, the experience is still captured and enriches Nike’s understanding of the customer, which undoubtedly deepens the relationship with the consumer and may accelerate future purchases, regardless of the platform they may occur on.

And while, as a consumer, in many of these experiences you’re likely focused on the experiences themselves rather than sales, Nike I guarantee you is. Whether or not customers are transacting during these offline experiences, Nike has confidence that the investment in retail experiences will eventually lead to increased sales. Now, a lot of this hinges on Nike’s ability to convert additional customer data into incremental value in future touchpoints, but this remains to be proven. However, already Nike has pointed to the fact that customers who use personal shopping appointments transact at three times the average transaction size.[4]

However, while Nike’s progress has been impressive, Nike Soho represents just one (massive) store. What remains to be seen is whether Nike can continue to create these experiences in repeatable, perhaps smaller-scale ways.

[1] Clark, Evan, and Evan Clark. 2018. “Which Retailers Are Closing Stores In 2017”. WWD. http://wwd.com/business-news/financial/retail-store-closures-2017-macys-bcbg-american-apparel-wet-seal-abercrombie-limted-jc-penney-sears-10842214/.

Clark, Evan, and Evan Clark. 2018. “Which Retailers Are Closing Stores In 2017”. WWD. http://wwd.com/business-news/financial/retail-store-closures-2017-macys-bcbg-american-apparel-wet-seal-abercrombie-limted-jc-penney-sears-10842214/.