Launched in 2005, Reddit is one of the largest and most active online communities in the world. The website is the 7th largest in the U.S. and boasts approximately 234 million unique users generating 8 billion monthly page views. Reddit is hailed as the “front page of the internet”, and the site’s digital influence is powered by its informed, passionate, trend-spotting and engaged users. Reddit users contribute to over 10,000 active, user-generated “interest-based” communities called “subreddits” and cast north of 21 million votes per day. The site largely aggregates social news and provides forums for user discussions and web content rating.

Reddit’s mission is to “help people discover places where they can be their true selves, and empower our community to flourish”. Users are attracted to Reddit’s authenticity and commitment to provide a sense of belonging for everyone. Reddit empowers this sense of belonging by allowing users to easily find “subreddits” to follow and share content with. Users can also create their own “subreddits” to discuss virtually any topic of interest with Reddit’s vast online community.

Reddit’s community forum provides immense value for its internet-savvy users as it enables them to have conversations about shared interests that could not happen anywhere else online. In addition, the site’s “upvote” and “downvote” mechanisms give the wider Reddit community a voice in determining what content is important (or popular, funny, interesting, etc.) and should be prominently displayed to other users.

Reddit encourages user engagement via online mechanisms and offline channels. Users interact with the Reddit community by sharing, voting, and commenting. Reddit users can post content (e.g., images, links, stories, videos, etc.) in subreddit forums comprised of users with similar interests. Reddit users can comment on any post on the website, which contributes to the strong engagement and network effects users experience on the platform. User volunteers independently moderate subreddit communities to ensure that content and discussions stay on-topic for that particular subreddit. Users can “upvote” or “downvote” shared content or subreddit discussions so that they are displayed more prominently within their communities and on the Reddit homepage.

Reddit has taken an organic approach to managing its active online community. The platform has mostly grown via word of mouth from it’s initial audience largely comprised of programmers. Reddit focused on this set of early adopters and gained popularity as users migrated to Reddit after the missteps of competing online communities (i.e., Digg.com).

The company’s core values reinforce the strength of its community and allows the site to grow without departing from its mission. These values (along with information about “how Reddit works”) are shared with users immediately upon signing up to join the service. 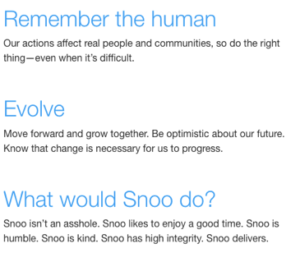 Reddit monetizes its community by working with brands and agencies to target audiences based on user data and engagement with the website’s 10,000 interest-based communities. Reddit collaborates with advertisers to develop authentic and engaging marketing campaigns called “redditads” that use content to generate conversation among users.

Sponsored headlines are marked as “promoted” so users can differentiate between paid and organic content. In addition to native ad formats, Reddit also sells traditional display ads on desktop and in-feed “native” display units on its mobile app.

Reddit further monetizes its loyal user base by offering a “Reddit Gold” subscription premium membership program for $3.99/month (or $29.99/year). The subscription service offers access exclusive features that allow for increased personalization and usability on the site and also enables users to turn off ads.

Reddit has experienced some challenges in terms of managing the topics that its community discusses. While the site aims to uphold the values of free speech, the Reddit community experienced some damages to its reputation after privacy scandals and the rise of some offensive subreddits that encouraged racism, misogyny, and other inappropriate beliefs or topics.  The company continues to manage the tension between moderating user activity while maintaining Reddit’s strong sense of user voice and authenticity.

In addition, the site’s vocal community has fundamentally influenced Reddit’s strategy and leadership. Ranging from backlash against actions from Reddit’s former interim CEO, Ellen Pao, to criticizing the monetization strategy of the website, Reddit is in a lot of ways at the mercy of its users – who ironically serve as the company’s most critical asset.

Iodine: the ‘Yelp of Medicine’

Student comments on Reddit: Managing the “Front Page of the Internet”