Quora, a Q&A site created in 2009 by two former Facebook employees, has sought to facilitate knowledge sharing by crowdsourcing answers to users’ questions. While similar concepts, such as Yahoo Answers or Ask.com, already existed, Quora’s mission was to create something better, more reliable and organized, with thoughtful and researched answers ideally contributed by subject experts. While the site has grown steadily, two questions remain for the future: As its user base grows quickly, will Quora be able to control quality? And, having put off monetization for years, will the site be able to make a profit as it begins to implement an ad-based business model?

While Quora doesn’t disclose numbers of registered users, it had an estimated 500,000 users six months after becoming available to the public in June 2010, its library spans over 500,000 subjects, and it was valued at ~$900M in its most recent funding round in 2014. Unlike some of its competitors, Quora from the start focused on developing a reputation for thoughtful and valid answers. It started off by seeking interesting contributions from Silicon Valley insiders, and has since seen public figures and celebrities post answers to relevant questions. In fact, Barack Obama recently took to Quora to respond to answer the public’s questions about the nuclear deal with Iran.

Quora’s approach to Q&A framed answers as a form of reverse blogging: allowing users to share specific knowledge that they have in response to a specific question. The founders feel that many people enjoy speaking out on topics they know about, and will be incentivized to do so if they know that someone is interested. In the spirit of encouraging knowledgeable people to share their expertise, the site rolled out a feature allowing users to start their own blogs on Quora, which appear alongside answers when users search for related topics. For many users this is a way to gain significantly more visibility than a personal blog.

Of course, as with any crowdsourced knowledge-sharing platform, Quora runs the risk of trolling and low-quality questions and answers. User-generated Q&A, in which users are allowed to and even encouraged to add onto previous answers, also runs the risk of deteriorating into emotional debates about sensitive or controversial issues such as religion or politics.

Aware of these issues, Quora has aimed to maintain quality in order to create a virtuous cycle to attract expert contributors. The site has tried to limit quality issues in various ways, including obligating users to use their real identities in order to post or vote on answers and using a complex user up-voting to make better answers more visible. Further, Quora has users to choose topics of interest to follow, building out a customized homepage for each user, and also allows them to contact other users directly with questions or ideas, cultivating an atmosphere of knowledge-seeking and discourse. Quora also has new users pass a quiz to teach them about language and content quality, for example encouraging users to ask questions which could be a “reusable resource” for others down the line by providing specific information and context. 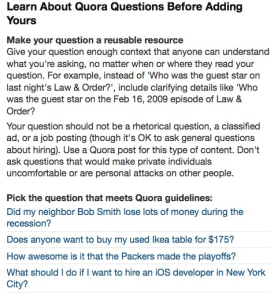 But as the site’s users swell to the millions, it may be increasingly difficult to maintain this position, and the site may find itself overrun with poor content. Already, blog posts about the “dumbest questions on Quora” poke fun at some of the site’s content.

As it has been building out its user base and content, Quora has been slow to monetize, and even its own users have speculated about how it will eventually pursue a profit there are several Quora threads devoted to the topic). Earlier this year, Quora announced that it will likely start rolling out ads in the coming year or so. Given that people tend to land on Quora when searching for very specific questions, the site can feature highly targeted advertising. Nonetheless, it remains to be seen whether Quora will be able to become self-sufficient through advertising. It’s possible that it will have to couple this model with other revenue sources, such as premium membership allowing access to a greater number of answers.

It will be interesting to see what happens with Quora as it grows bigger, particularly when it comes to managing quality with a greater user base and incentivizing the best users to stay active.

GasBuddy: from a friendly gas price whisperer to a data analytics giant