Video game development has traditionally been dominated by large developers with deep pockets to invest in marketing, hire legions of programmers, and pay upfront capital costs. However, particularly in PC gaming, where developers can bypass some of the barriers to entry that exist in console game development, there have been a few independent studios that have managed to become immensely successful. Valve started out as one of these, and through the quality of its games, it quickly became a tier 1 PC game developer. However, by leveraging its user base created through its success in game development, Valve was able to launch the Steam platform to sell third party games to generate hundreds of millions in dollars annually through royalty revenues. As the company only has around 300 employees, it is one of the most profitable companies per employee in the USA. [1]

Valve as a game developer

Valves roots go back to 1996, when it was founded by former Microsoft employees Gabe Newell (who is also a Harvard dropout) and Mike Harrington in Seattle through the millions they earned from Microsofts IPO. Through a contact in the industry, they were able to license the engine used to develop blockbuster gaming title “Quake” (engines are the base code that games are created off of, to prevent having to build entire games from scratch). After two years of development, they released their first game “Half Life” in 1998, which exploded into a massive success for the company and developed a cult like following. Through the success of Half Life, and from the strategic choice of letting independent developers use the Half Life source code to develop “mods”, Valve was able to develop several other wildly successful titles – most notably Counter Strike and its two sequels (originally created as a mod for half life), Dota and its sequel Dota 2 (dreamed up as a mod for a different game, Warcrat 3), and Half Life 2 (the sequel to Half Life). [2]

While the total number of games developed and sold by Valve may not be very high, the success of them is hard to imagine for people who aren’t familiar with the industry. The most recent version of Counter Strike (Global Offensive, or CS:GO) has around 10M unique players per month, with peak players at a given time reaching around 800K [3]. Dota 2 and CS:GO have both developed into “e-sports” where literally millions of people watch professional teams play competitive matches (see image below for  what a Dota 2 live event looks like) and earn prize pools worth huge sums of money (the winning team of the Dota 2 2016 championship received $9.1 million dollars). [4]

In short, even if you aren’t a super nerd like me and haven’t heard of any game Valve has made, you can trust me that they have several WILDLY successful titles (like, in the same league as games you HAVE probably heard of like Halo, World of Warcraft, and League of Legends). 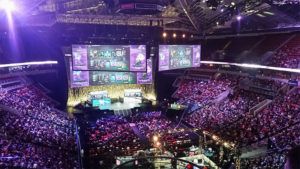 Steam: A shift from product development to a platform – Valve’s recipe for printing money

In 2003, Valve developed a software client called “Steam” to act as a launch pad for its games. So rather than clicking a “Counter Strike” icon to open Counter Strike, you open “Steam” and open and update the game from the steam platform instead. The initial goal was to streamline the patching process (free updates to the game to fix bugs or improve gameplay), and provide a single platform to launch all of the different Valve games from the same spot. Due to the wild success of Valve’s games, millions of people downloaded the Steam platform to purchase and download their Valve products. [2]

Once there were large number of people who had downloaded the Steam platform, Valve next launched the Steam Store in 2004 (see image below), where it allowed third parties to sell their games through Valve’s platform. Valve would then market these games to the huge user base of Steam in return for a 30% royalty on all revenues generated. So for independent developers, the Steam store quickly became the best way to launch their games as it allowed them to get their game noticed by millions without any upfront capital investment into marketing. For users, it became a safe and secure way to learn about and purchase games developed by companies they have never heard of (and while the games usually cost money, downloading the platform is totally free). The platform benefits from network effects in that it is better as the number of users and developers on it increases. The greater the users, the more user reviews are generated and the more likely it is that you will know someone else on Steam that you can play games with. As the number of developers increases, the more expansive the Steam library becomes and the greater the incentive is to download and use Steam. And of course, as the number of users increases, there is a greater incentive for developers to use the Steam platform to launch their games, as it means more potential customers for their game.

Today, Steam serves as the primary tool people use to buy PC games digitally (accounting for around 75% of total digital game downloads on PC, and 15% of the PC game market total) [5]. There are over 75M users (see below for growth rates over time) and over 780 MILLION games registered allowing Valve to become the most profitable company per employee in the USA [1] as they are effectively incurring very few costs to maintain steam while bringing in hundreds of millions of dollars annually from royalty fees. They basically created the royalty monopoly that XBOX or Playstation has over their games without having to produce and lose money selling millions of expensive consoles. The success of Steam has caused all but the most successful PC game developers (like Blizzard or Riot games) to be forced into using the platform to launch their titles – even large development studios like Ubisoft (Rainbox Six, Assassins Creed) have to use Steam to launch PC titles. Their most recent title, “For Honor”, sold 50% of its copies through Steam where it was selling for $60, and only 45% through its own platform where it was selling for $20-25 less, simply because people don’t know their platform exists. [6] 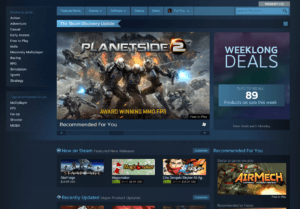 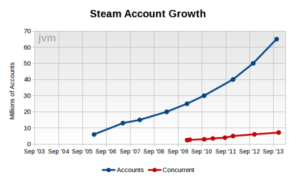 Student comments on Printing money: How Valve went from being an indy game developer to the most profitable company per employee in the USA