The Priceline Group is the world’s largest online travel company and operates platforms connecting travel suppliers such as hotels with travel buyers.  Priceline’s portfolio of businesses includes Booking.com (the leading online travel agency [OTA] in Europe, Latin America, and parts of Asia), Agoda.com (the leading OTA in SE Asia), Kayak (the leading flight meta-search provider), and OpenTable (the leading restaurant reservations website) in addition to its namesake Priceline.com business.  In 2015, Priceline is expected to book ~$57 billion of travel expenditures and will capture ~$8.5 billion, or ~15% of the spend, as gross profit.

Since a near-death experience with the burst of the dot-com bubble, Priceline has become one of the world’s most important internet companies. In fact, Priceline is the 3rd largest e-commerce company in the world (by gross merchandise value) after Alibaba and Amazon and its flagship property, Booking.com, is the 3rd most global website in the world (based on the number of countries in which its used and user traffic in each country) after Google and Facebook.

The secret to Priceline’s revival lies in its 2005 acquisition of Booking.com for $135 million. The property now accounts for >80% of Priceline’s market value of $65 billion (per Wall Street research) and is widely acknowledged to be the most successful acquisition in internet history. Booking.com was among the first online travel companies to capitalize on indirect network effects. It realized that travel suppliers prefer to sell their inventory through channels with the most users and that users prefer to buy through channels with the greatest supply. As a result, there are meaningful demand-side benefits to scale.

To build scale, Booking.com initially focused on providing the most valuable standalone solution to both sides of its platform. Booking.com employed the following strategies to add suppliers:

The Impact of a Network Effect

Priceline / Booking.com’s strategy to develop strong network effects succeeded and the results are stunning. Priceline’s room-nights booked are larger and faster-growing than Expedia and are much larger than the upstart Airbnb: 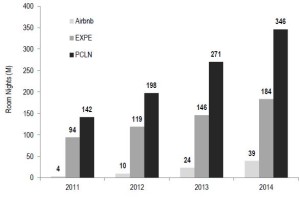 Priceline accounts for ~40% of all online leisure travel bookings vs. 26% for Expedia, its closest competitor (the share figures are even higher when viewed just as a % of OTA booking rather than all online). Priceline’s share gains have healthily outpaced Expedia’s: 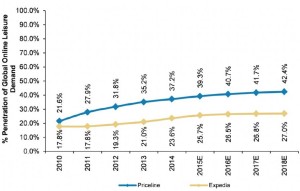 The market share figures are even more amazing in Priceline’s strongest market, Europe, where Priceline processes 60% of all online leisure travel bookings: 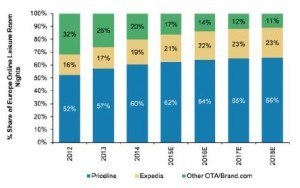 Not only has Priceline achieved greater scale and faster growth vs. Expedia, but it has done so with far lower customer acquisition costs and far higher profitability:

Given how successful Priceline has been, it has attracted meaningful competition that is attempting to weaken its network effects and take some of its profit pie. Below is a sampling of competitive threats:

It remains to be seen whether Priceline can stave off these threats, but between the increased ease of multi-homing and more direct competition from complementers (like TripAdvisor) and suppliers (the hotels themselves), it seems clear that Priceline’s network effects going forward will not be as strong as they were in prior years.