Four years ago fashion marketplace, Poshmark, launched an iOS app which allows consumers to buy and sell second-hand clothing, shoes and accessories. The company has grown its online community to millions of followers, was on track to make $200m in sales as of April of this year and raised $47m in outside financing to date.  The question is, can Poshmark’s executive team make decisions that will allow them to outperform competitors like eBay, Tradesy and ThreadUp? In the following post we will explore the beauty that is the Poshmark marketplace and highlight future pitfalls that the company should be aware of. 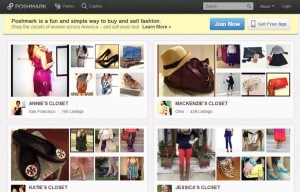 Unlike other marketplaces, Poshmark does not play middleman in managing transactions on its platform.  Buyers and sellers communicate directly with one another.  To facilitate activity on the platform Poshmark offers services like shipping labels, complimentary authentication for higher priced luxury items and secure payment transfers.  Each person in the ecosystem is potentially on both sides of the marketplace as a buyer and a seller.  Additionally, as a buyer the platform becomes more valuable as more sellers join because it increases the suite of goods and the chance that I will find a price closer to my budget.  As a seller, the platform becomes incrementally more valuable with each buyer that joins because it increases the chances that I will be able to unload my product.  The switching cost for Poshmark while not monetarily material, becomes meaningful when content and community is considered.  Users are able to post products, maintain a wish list, and accumulate followers on the platform.  Poshmark has also developed and algorithm that records data with regard to shopping and selling patterns to ensure that consumers only see relevant products displayed in their feed.

Poshmark has now expanded to the web but prior to this change remained disciplined about its iOS mobile app presence.  This decision contributed to increased user engagement.  Buyers and sellers use their phones to check in on sales seven to nine times per day and spend over 20 minutes on Poshmark’s service.  This is further reinforced by the fact that customers are also using the app as a social network of sorts.  Sellers on the site can build profiles highlighting their personal style to drive sales.  Followers are able to comment, ask questions and suggest products they themselves might be selling as well.

Poshmark’s focus on mobile also forced the company to prioritize a simple, user friendly experience without a lot of bells and whistles.  The limitations imposed by developing an app for a smaller screen made the company focus on the essentials for creating a seamless user experience.

Poshmark’s decision to position itself as a platform rather than a product focused company has allowed it to scale quickly.  Over $2mm in inventory is uploaded to the site daily.  The company takes a 20% cut without having to worry about inventory management, logistics, etc. Instead the executive team can focus on building new technology and initiatives to help users navigate the platform.  One such initiative is the development of physical and virtual posh parties to keep sellers connected.  They’ve even gone as far as hosting a two-day conference aimed at strengthen ties within the Poshmark community.

Poshmark has brought a fresh, new perspective to what has otherwise been a less than luxurious shopping experience. Furthermore, in making crucial decisions like becoming a platform and focusing on mobile first the executive team has ensured the company’s ability to scale in the future.  Poshmark will need to continue its focus on a simple and intimate user experience if it hopes to compete with the likes of giants like eBay. Investment in a curated and targeted offering will also be key moving forward.  The downside of acquiring millions of new users is that the platform can quickly become cluttered with merchandise that won’t be relevant for everyone.  The ability to maintain a targeted shopping experience will be increasingly important as Poshmark continues to grow its network of users.