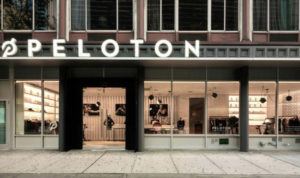 Peloton incorporated the latest in technology into the design of its luxury stationary cycling bikes to improve upon the experience for indoor cycling. Peloton has dramatically innovated on hardware design and made strategic decisions around every detail for their bikes, ranging from the size of the LED screen, magnetic resistance system, power transmission belt drive (vs. a traditional bike chain), and the look and feel of the resistance nob. These design features elevate the user experience by creating the most ergonomic and advanced ride. 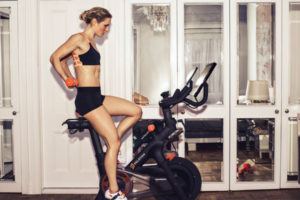 In addition to hardware innovation, Peloton has leveraged the latest broadcasting technology and connected sensors to improve cycling for its bike users. Peloton films 12 live cycling classes per day at their indoor cycling studio in NYC. These classes are broadcast to the consoles on Peloton bikes and to Peloton’s mobile and tablet app, and can be streamed live or viewed on-demand for a monthly subscription fee. 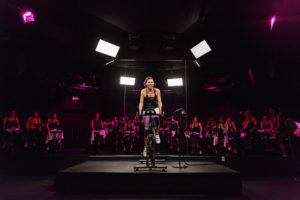 All Peloton bikes are complete with two sensors that collect RPM (revolutions per minute) and resistance data when a user is cycling. The data transmitted from these sensors to the bike’s LED screen/console to derive additional metrics that indicate a user’s performance (such as power) and tracks progress by maintaining user profiles. The console runs a proprietary operating system that aggregates user data and sends it to Peloton’s cloud platform. This data managed in the cloud is redistributed in real time to users who are also taking the same live-stream class. Remote users can see their performance data on a leaderboard with others in the studio and across the globe, making the at-home cycling experience exceedingly interactive. In addition, if a remote user is taking a live-streaming Peloton class, the instructor will see the user’s data in real time and extend engagement by speaking out to specific remote users while on broadcast.

Peloton sells bikes for consumer and commercial use. Consumer bikes cost $1,995 and heavy-duty commercial bikes built for public use sell for around $3,000. While Peloton bikes are priced at the luxury end of the exercise bike market, the company does not aim to make money on it’s bikes (nor does it intend to lose money on them).

Peloton sells a subscription streaming service of live-stream and on-demand cycling classes for $39/month. The service also includes non-bike based workouts such as yoga and high intensity interval training. As of January 2017, Peloton had 300,000 at-home subscribers.

Finally, Peloton charges NYC-based riders $30 to join one of its live filmed cycling classes out of its physical cycling studio location in NYC.

There’s a variety of challenges Peloton faces as it aims to continue to achieve its high growth in the coming years. First, Peloton is experiencing stiff competition from other streaming exercise video apps and entry from traditional physical cycling studios, such as SoulCycle. In addition, Peloton is starting from very low brand awareness and must work to increase this in order to scale. The company has made significant investment in marketing its brand and must continue to do so.

If Peloton uses its existing wealth of user data to build deeper competitive advantage, the company will be uniquely positioned to win in the future of exercise. Peloton could use historical rider streaming data to build a personalized recommendation engine for users that suggests rides and instructors. The company could improve its ability to leverage data and analytics by using rider performance information to influence the composition and design of cycling classes taught by its instructors. Further, by analyzing user engagement, Peloton can easily evaluate the performance of their instructors based on the activity of users that are joining and engaging with a specific instructor’s live-streamed class or tuning in on demand. Peloton could also leverage its user data by partnering with other connected wellness companies such as FitBit to help riders live healthier lives. Lastly, the company partner with insurance companies to incentivize members to stay active through the Peloton platform; Peloton could share its user fitness data with the insurance companies to potentially give members discounted premiums.