Over the winter break, I had the pleasure to spend a few days with my twin brother. Like all healthy sibling relationships, we don’t always see eye-to-eye on issues. We do, however, share similar food preferences, and so the best debates between us occur usually over a good meal – that way, if the argument becomes too heated, we can always talk about something we agree on, “the food sure is delicious, right?”

One such dinner debacle we had was on whether Pandora or Spotify was a better music streaming service. A die-hard, paying Spotify user, I thought Pandora was long on its way out. After all, over the past couple years, Pandora’s monthly active users (MAUs) have declined. In December 2014, Pandora reported 81.5 million MAUs while in September 2016 the company announced having only 77.9 million MAUs. 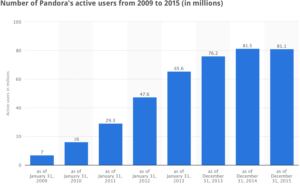 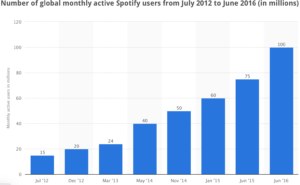 However, my brother remained unconvinced. A long-time, free-tiered Pandora listener, he stated, “Pandora identifies the songs that I like to listen to, and best of all, I don’t pay anything for it. In the U.S., I would say Pandora is more popular than Spotify.”

Curious, later that evening, I researched how many other individuals were like my brother and preferred Pandora over Spotify. I was surprised to find that the answer wasn’t as clear-cut as I had initially thought.

Last year, a study by Edison Research and Triton Digital revealed that nearly twice as many people in the U.S. used Pandora over Spotify to keep up-to-date with music. 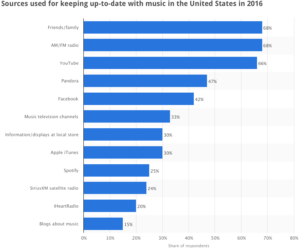 Additionally, earlier this month, MusicWatch reported in its 15th Annual Music Survey that among the approximately 14 million Amazon Echo users in 2016, Pandora was the most-listened to streaming service. 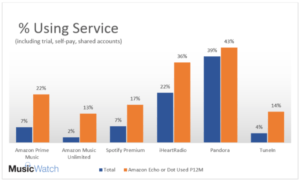 SO, WHY IS PANDORA LOSING?

Fundamentally, Pandora is operating on a highly unsustainable business model that has yet to turn an annual profit. Of course, some may say, but Spotify also has yet to turn a profit. The difference between the two companies, however, is that Pandora may never turn a profit whereas, Spotify just might one day, assuming it can continue to scale. 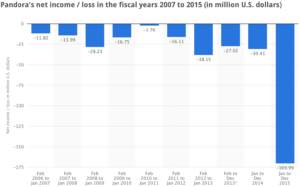 To better understand why this is so, it’s worth first going over several key aspects about Pandora’s business model.

The problem with this business model is its dependence on advertising revenue to capture value for the company. In fact, Pandora has always relied on a significant portion of revenues to come from advertising. 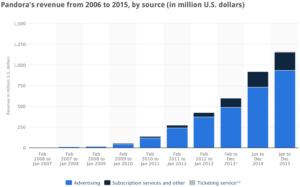 Pandora’s business model misses why paid-tier users are critical to the company’s survival. Subscribers pay Pandora for a personalized music experience, which is driven by Pandora’s technology. The fact that only 5% of Pandora active users are paid-subscribers, compared with 25% of Spotify active users, suggests that although Pandora’s technology may create enough value to keep free-tier users, it may not create enough value for them to justify Pandora’s monthly subscription fee.

Pandora and Spotify are very different technologies. Pandora is an internet radio music service (songs are recommended to the user), while Spotify is an on-demand music service (users select their songs). If Pandora active users find Spotify’s technology to be better, then Pandora’s business model is bound to stay unprofitable due to switching costs. This could explain why Pandora’s MAUs having been decreasing while Spotify’s have been increasing.

Pandora’s business model is attractive to free-tier users such as my brother, but underlying the model may not be a technology that’s good enough to convert free-tier users into paying subscribers. Spotify, however, focuses on creating value for paying customers, and in doing so, is able to offer individuals an incredible app with all the music that I love whenever I want it.

[i] In 2015, only 3.9 million individuals were Pandora Plus subscribers, representing 5% of total active users.

[i] Fewer timeouts result from being given longer listening times before a station pauses.

[ii] Rdio is an on-demand music streaming service similar to Spotify that Pandora acquired on Oct. 6, 2015 for $75 million in cash.

[iii] Next Big Sound is an online music analytics platform that was acquired on May 19, 2015.

Student comments on Pandora: How the Wrong Business Model Can Lead Management to Focus on the Wrong Customer