The rapid digitization of global economies has created many opportunities for innovative firms to develop new products and services that improve lives and create convenience for citizens across the world. One negative consequence of such rapid digitization has been the rise of cybercrime. Cybercrime was estimated to have cost the global economy $450 billion in 2016.

The cost of cybercrime isn’t limited to the actual financial repercussions of the crime but also limits the global economic activity as firms are less willing to develop technologies that could be exposed, and consumer are less willing to engage with technologies that they don’t view as safe. One estimate puts the economic value lost from cyber related issues including cybercrime, compliance costs, and under utilization of technology assets at $1.4-$3.0 trillion. This issue will only compound with the proliferation of IoT. McKinsey has estimated that there could be 20 billion to 30 billion connected devices globally by 2020, up from 10 billion to 15 billion devices in 2015.

Such rapid digitization, and the associated negative impacts of cybercrime activity, creates the opportunity for firms to create products and services that aim to reduce cybercrime and decrease friction for using cyber products. Total U.S. cybersecurity spend has increased by ~11% annually since 2009, with technologies focused on the cloud growing significantly faster. 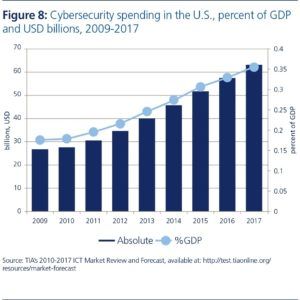 One firm that has benefited from this opportunity is Palo Alto Networks. The firm has developed a platform of enterprise-level next-generation firewalls including cloud based offerings combined with threat identification. 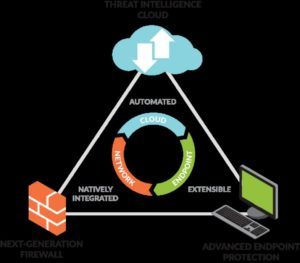 Palo Alto Networks was founded in 2005, and many firms that are in the same business have existed for far longer, yet, the rapid digitization of the economy has enabled Palo Alto to grow revenue substantially over the past 5 years from $0.4 billion in 2013 to $1.8 billion in 2017, a CAGR of 45%. To put this in perspective, 80% of the revenue Palo Alto generates today has been new revenue growth over just the last five years. Why is this?

For the most part, Palo Alto is providing the same customer value proposition it did prior to 2013, however, two primary phenomena have acted as a boon to the business. First, cybercrime has increased in prevalence and sophistication with many high-profile lapses in security widely reported in the media (e.g. Target, Equifax). These breaches have acted as a catalyst for boards and management teams to evaluate their security protocols and hire firms like Palo Alto. Second, whether real or perceived, technologies have become more interconnected, increasing the severity of a cybercrime incident.

These market shifts have allowed players like Palo Alto to emerge as huge winners of the digitization wave as they use their technologies to capture significant value from the value they create for businesses, and society at large, by: (i) reducing the incidence and magnitude of cybercrime, (ii) freeing consumers to explore new, innovative technologies without fearing cyber breaches, and (iii) allowing businesses to confidently invest in those new, innovative technologies with confidence in securing the infrastructure they create.